Waking up this morning in our beautiful hotel in Mieming, he mountains around us are showing already the first snowy tops of this year. After the hand over of the motorcyles yesterday and the fantastic welcome diner, everybody is eager to go for the first ride. Luckily for us, the weather improved a lot and shows good forecasts for the coming days! 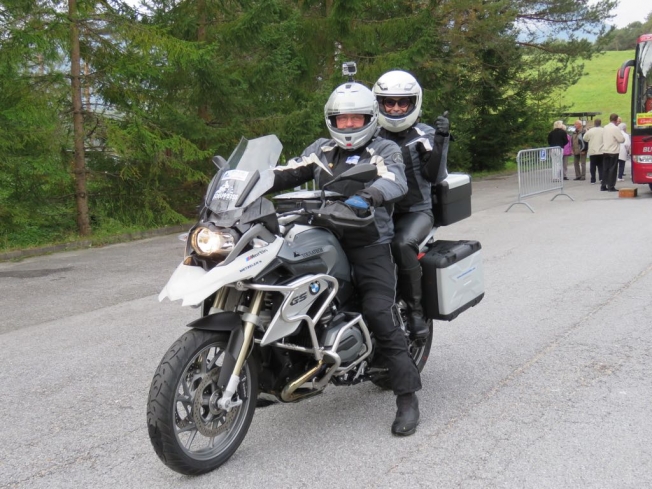 Milton and Lea ready for take-off! 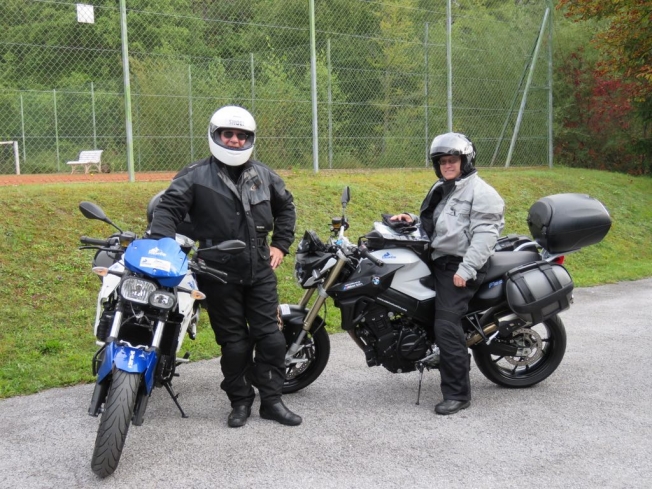 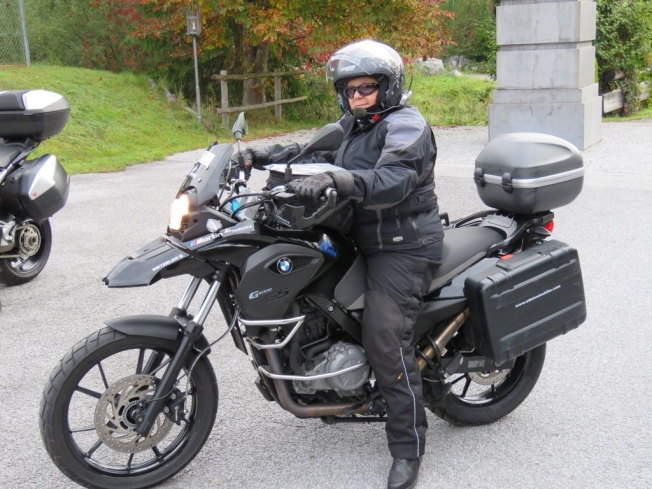 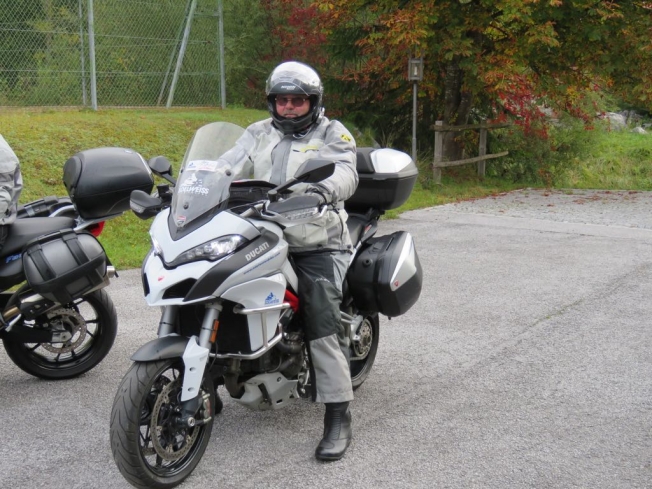 Gary on the untamed horse!

Yesterday was a perfect warming up for the second day of the tour: the route from Pontresina to Brunnen. The entire group chose the long route for today, so starting the beautiful morning out of Pontresina towards the famous olympic village of St. Moritz, where we saw some famous five star hotels in the place which is considered as the very beginning of the wintersports as a leisure.

Today was again a long day with some challenging passes to go over: Maloja pass, Splügen pass, San Bernadino pass, Lukmanier pass and finally the beautiful Oberalp pass. The weather improved during the day so it was again a day full of fantastic views. 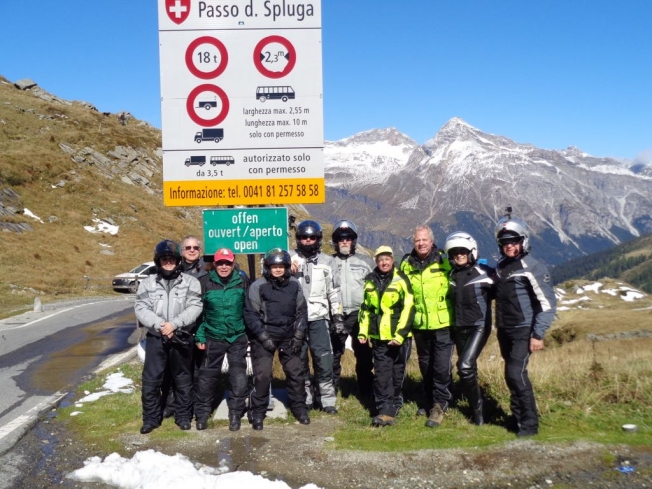 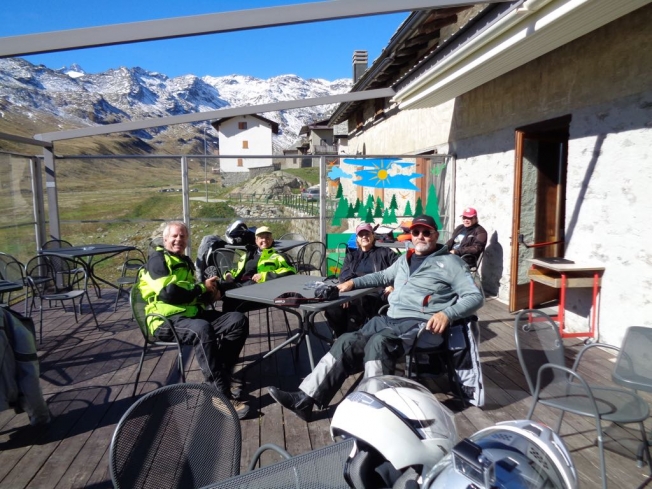 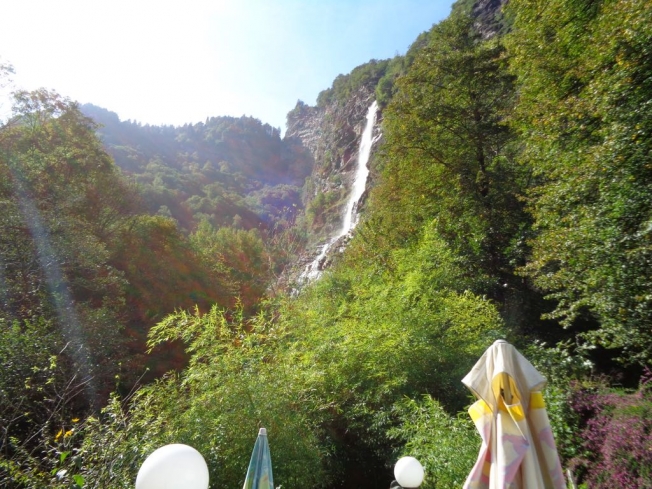 lunchstop at a scenic place near the waterfall 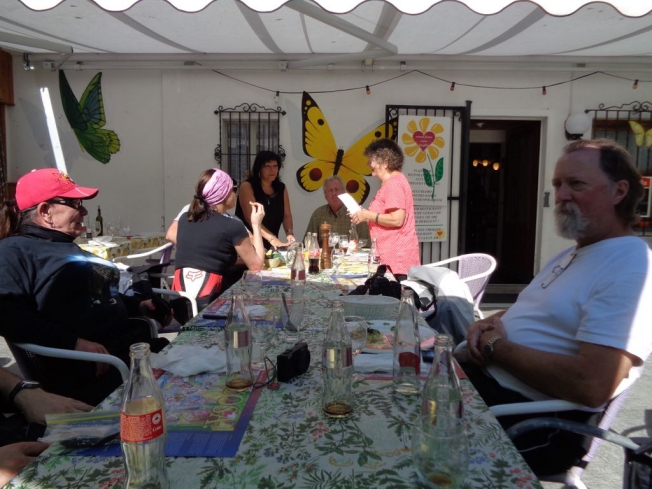 lunch on the way to Zermatt

This great group of riders can't get enough of riding in the Alps, so everybody chose again for the long route today. And of course also looking forward to what chef Angela was preparing for the picnic in the Göschenen alp.

Under a overcsted sky we took off direction west to the lake Sarnen. At the turning point to eastern direction the sky cleared out and by the time we ascended to the Susten pass the views were so beautiful that especially John couldn't get enough to take pictures of the environment

Next highlight was the picnic next to the glacier at the end of the Göschenenalp. Unfortunately the sky above the glacier was clouded, but the great picnic made that up. Well done, chef Angela!

On the afternoon program there we had to cross another pass : the famous Furka pass (everyone remembered the Goldfinger movie which was partly filmed at this pass) . At the hotel Belvedere (also in that movie) we visited the ice cave in the Rhone glacier.

Finally arriving in the car free town of Zermatt we had again a nice diner in the cosy restaurant of our hotel. Bonus was a clear sky at arrival so everybody could see the famous mount Mattterhorn in all his glory 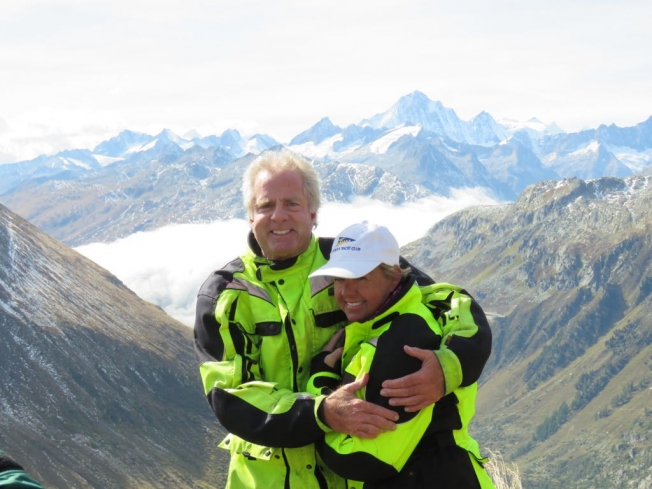 John and Kathy near the Oberalp pass 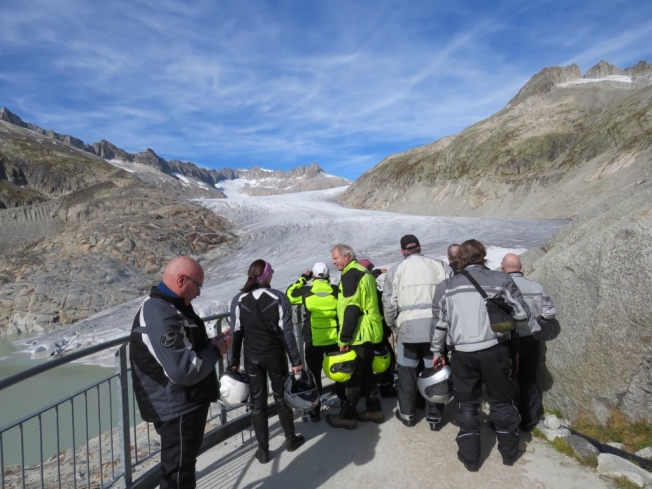 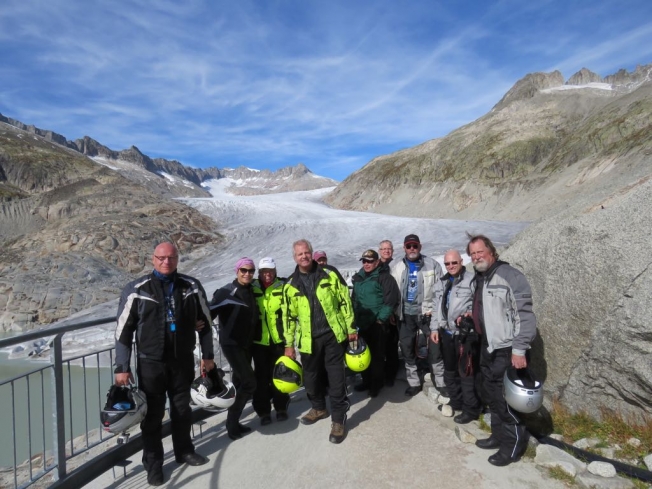 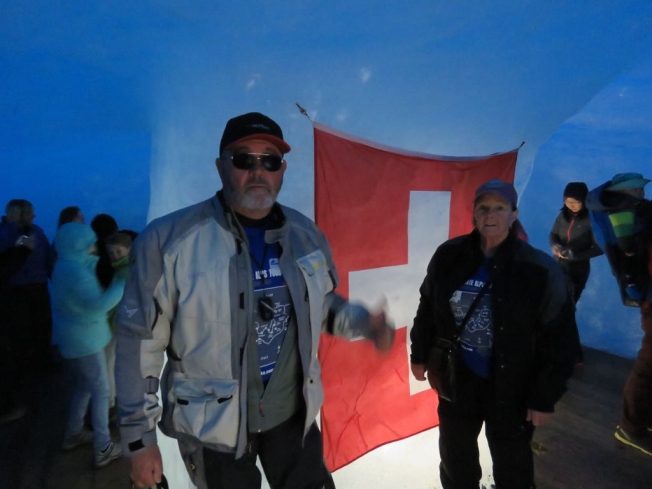 Gary and Kalanda in the Rhone glacier ice cave 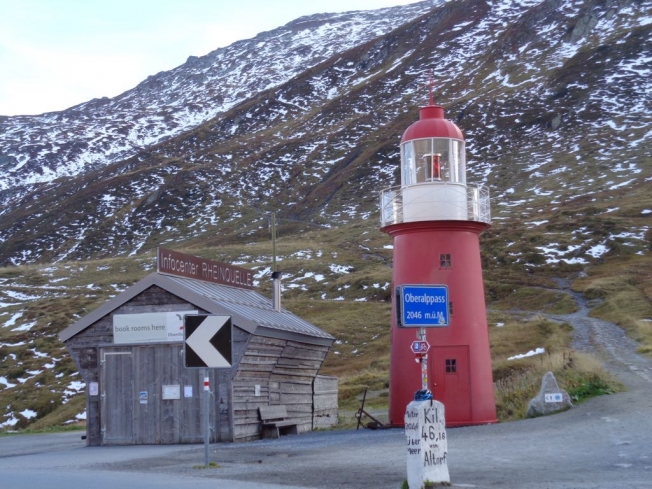 the source of river Rhine on top of the Oberalp 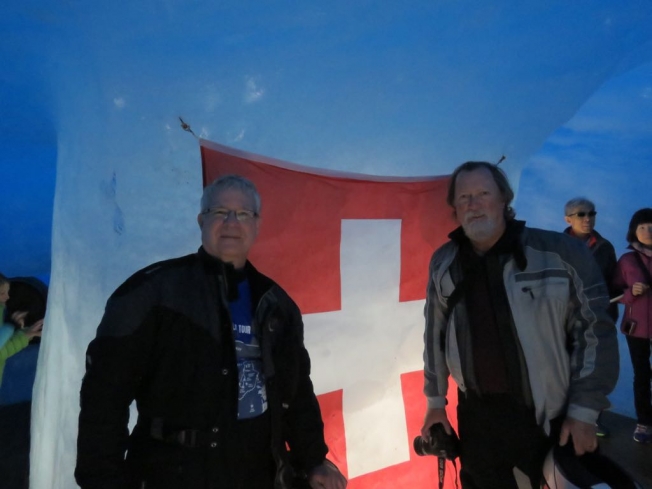 James and Charlie as icemen

This was the first day the group splitted up in two groups. John and Kathy and Milton and Lea were following Angela in the van to get in time at Lugano and enjoy the city. The rest of the group followed Ted on the long route to the last part in Switzerland (and a bit of Italy..)

Again the weather gods were nice to us: after a chilly start up from Zermatt in soon cleared out the moment we started to climb up the Simplon pass. Beautiful views and a nice , warm cappucino : what else do you need in the morning!

After a nice lunch at the lake side of lake Como, we took the ferry from Verbania to Laveno. On the other side we did the last part of the route today through the beautiful surroundings and wine yards of Italy , before getting into the city of Lugano and it's famous lake 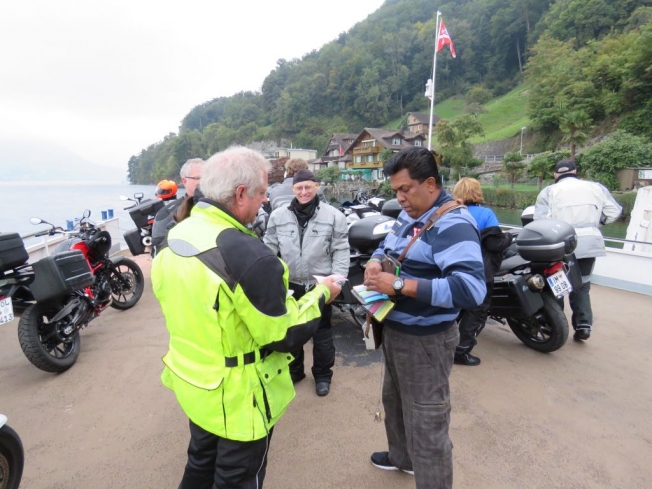 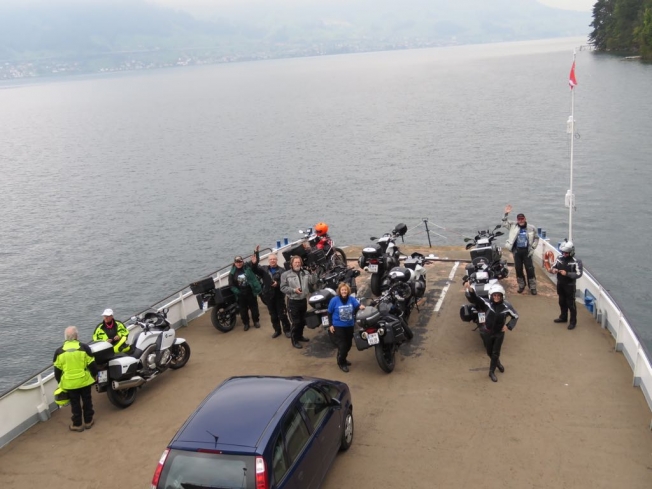 Ahead today the longest riding day of this tour. Again two groups today, so tourguide Ted took off with six bikes on his tail facing at least 1000 cures today! But this geat group riders couldn't get enough of the curves and  switchbacks whatsoever!. Cure after curve they kept on going, well done guys!

The weather was fantastic , especially the secon part of the day when we were facing the very challenging Vivione pass. When finally heading down from the Mendola pass in the beautiful afternoon sun, we had to go up still a bit to the hotel in Klobenstein where we could look back at a fantastic riding day.

At diner group 1 and group 2 exchanged their stories during , again, a very nice diner!

Tomorrow: restday number one....well...restday?? Riding it's what we want! 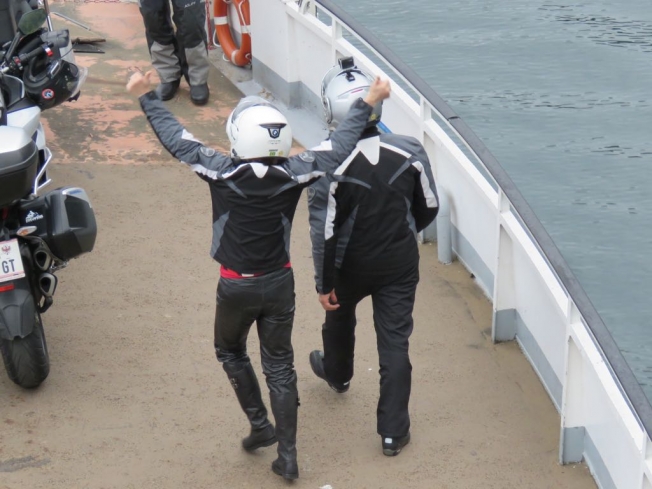 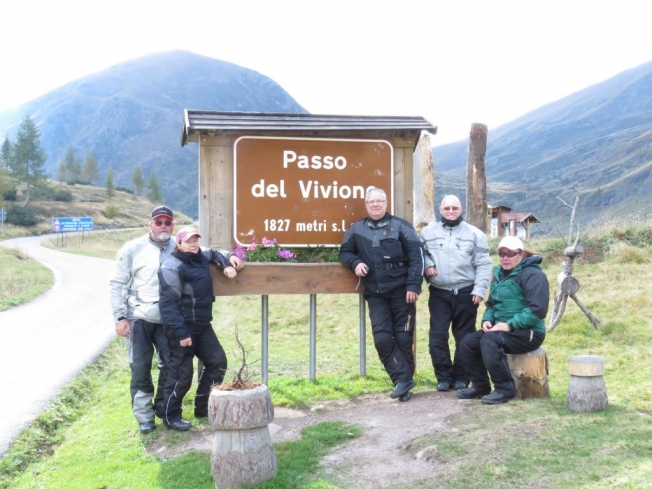 the die-hards on the Passo Vivione! 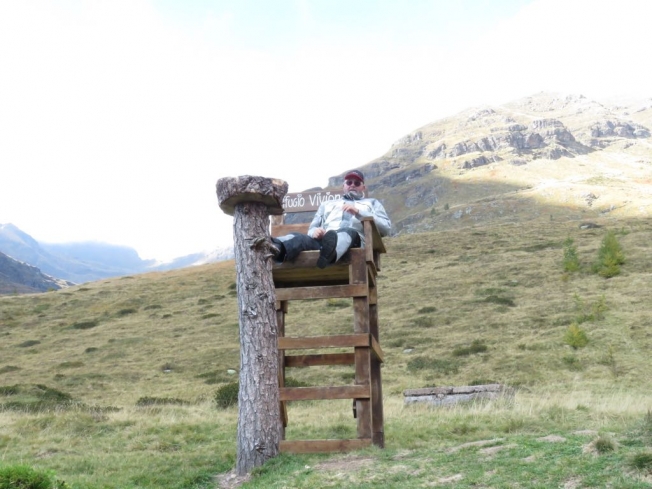 Harold Bisset
Thursday, October 29, 2015 at 22:43
wouldn't begin to compare to the Alps! We rode from 150 to 250 miles every day for eight days and never left the mountains. And, I was only in a portion of them. The sights were mind boggling from the Brown Swiss cows everywhere with their clanging cowbells to the changing architecture from the Swiss Chalets with their slate slab roofs to the more Spanish style with the red tile roofs in Italy. The sound of church bells ringing as we rode through the small villages with their narrow twisty streets and cowbells clanging everywhere was amazing. The smell of fresh hay being hand cut with sickles and wood burning from all of the chimneys is unforgettable. I hope that this gives you a glimpse into what it is like for a rider to fulfill an unforgettable lifelong dream!! I'm so glad that I decided to do this while I was still capable of doing it!! This was the best 70th Birthday present that I could have ever given myself! I'm now looking forward to my next adventure!!
Reply

Ted Goslinga
Thursday, October 29, 2015 at 23:34
Hi Butch,
Thanks you for your very kind words and for your very positive comments on this blog about the ultimate alps tour. We really enjoyed you as one of this great group of riders and hope to see you back at one of our tours in the near future. It was a pleasure tor side with you! Best regards, Ted
Reply

Harold Bisset
Thursday, October 29, 2015 at 22:34
Hi Angela and Ted,
I want to thank you again for the most memorable trip and for all of the support that you gave me. This experience is one that I will remember and hold dear to my heart for the rest of my life!
Butch
Reply

Harold Bisset
Thursday, October 29, 2015 at 22:21
WOW!! It's been a little over a month now, and I still haven't been able to wipe the smile off of my face! This trip was the most fabulous and incredible thing that I have ever done and will be hard pressed to find anything more exuberating and exciting than this! I wanted to get it chronicled before the memories and feelings begin to fade. I still get quite emotional when sharing the pictures and talking about it trying to convey the emotions and feelings that I had. I was a little apprehensive about going to foreign countries with completely different cultures and languages, but thanks to Phyllis at Eileen's Travel for doing all of the groundwork to make sure that I was well prepared and Edelweiss' expert guides, Angela and Ted, all of my fears were quickly dashed. Angela and Ted made such a fabulous team together. Suffice it to say that I will never try to attempt something like this on my own!
I was very concerned about what the weather was going to be like as it was total cloud cover all the way up the East coast (couldn't tell over the Atlantic due to darkness), and all of England, France, and Germany. I was able to experience three sunrises in one morning... first, as it came up when we were above the clouds. Second, as we descended down below the clouds, and third, as we were landing below a lower cloud bank... NEAT! Arrived in Innsbruck Austria to a cold, cloudy, and drizzly day, but miraculously, a large High-Pressure center came in and we had partly cloudy to sunny weather for the whole entire eight days of riding with the exception of a light rain mixed with a little snow at the top of a high pass on the second to last day and I came down with a sore throat and lost the strength in my right hand the next day (good timing)! It had been raining for the whole week before we arrived. It would have been a real BUMMER if we would have had to ride in cold and rain with wet slippery roads for eight days!
There were eight bikes in our group which consisted of, besides myself, Lia and Milton from San Paulo Brazil (2 up), John and Kathy from Baltimore MD (2 up), Gary and Kalanda from Grand Junction CO, Jay and Jim from Rochester MN, and Charley from Ann Arbor MI. Thankfully, they turned out to be a fabulous group to ride with as all it takes is one jerk to wreck the whole ride. The bike that I chose was a BMW F 700 GS for it's lower seat height, which turned out to be the envy of everyone else as it out-performed the bigger 1200 and 1600cc bikes! The only problem with it was that it was a rental with only 1000 miles on it and the brakes weren't broken in yet and were VERY grabby. My expectations of the trip were that it would be like the old horse trail rides with everyone head to tail plodding along... boy was I WRONG! The first day had an ominous start as I was stuck in the middle of the pack behind the slowest rider and had to give him about a ten-second head start going into the corners and would still catch him at the exit of the corner. The first hairpin switchback was a downhill to the left so I gave him about a 100-yard lead. I was leaned over into the curve when I saw that he was almost stopped at the exit and had to get on the brakes. The front brake grabbed and unweighted the rear wheel and the next thing I knew it was coming around and passing me! The good thing was that we were almost stopped so it was more of a tip over rather than a crash... no harm to the bike or myself! After that everyone let me go to the front behind Angela or Ted, who both proved to be very competent adversaries for my aggressive riding style. On some of the passes they would wave me by and tell me to wait for them at the top... incredible!!
No amount of words or pictures could ever convey the sensations and feelings that I had on this trip. The sights were one continuous postcard without one mile of boring highway. If you took all of the mountain ranges in the USA (most of which I have ridden) and put them together, they still
Reply

You are making a habit of this tour this year. Happy twisties!

Marko
Wednesday, September 30, 2015 at 16:05
Carthy, John,
I see you are back in the Alps! Enjoy the tour - I am three days behind you!
Marko
Reply
Facebook Twitter Google+