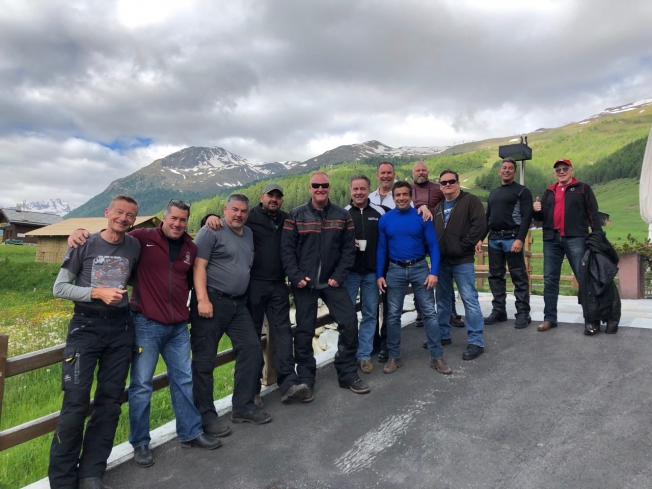 The fearless Harley-group in Livigno

Unbelievable - but the final riding day has arrived! As we had missed the Stelvio Pass yesterday, we decided to add it to the route today. Of course that was the big highlight of the day, but also the rest of the day was full of beautiful sights and scenery.

Stelvio, Glurns, Reschenpass and the sunken church - and finally we were back in Seefeld, where our adventure had started a week ago.

Full of new impressions and experiences, and with lots of incredible mountain roads behind us, we can sit down together one more time for our final dinner, before everybody returns home... 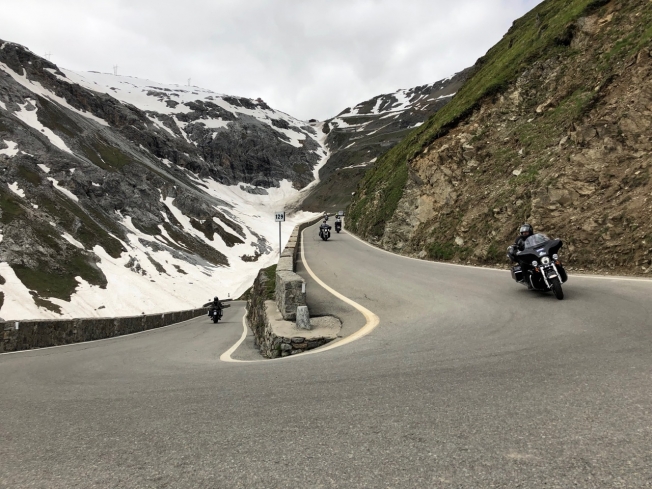 One of the 48 switchbacks on Stelvio Pass 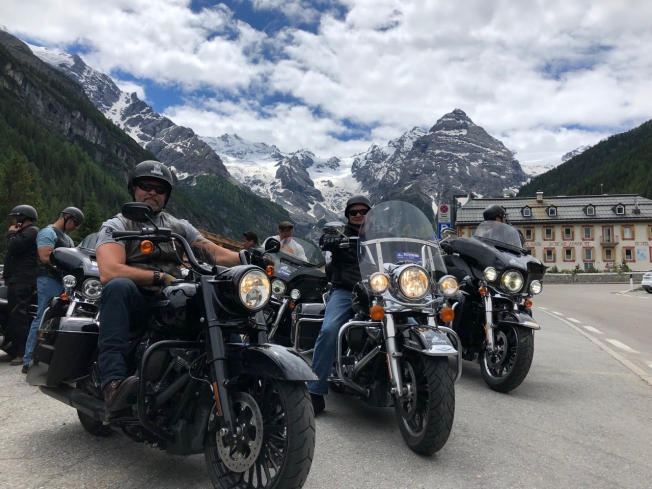 Eric and Steve at the bottom of the pass 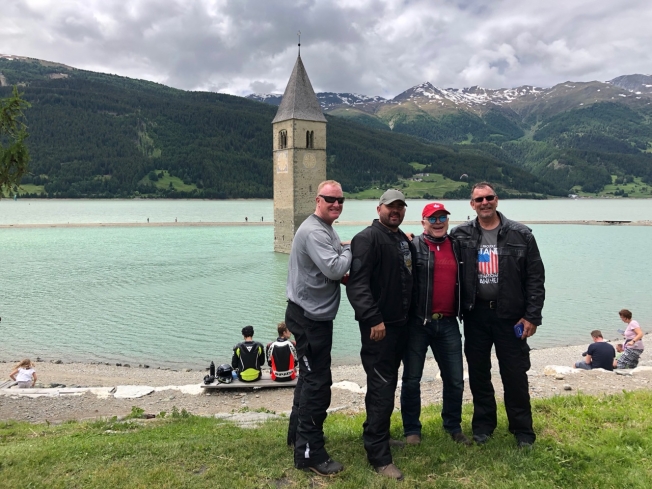 Everybody was well rested for our oncoming big riding day. Six passes were enroute today, including the Mother of all Passes, the Stelvio Pass. Unfortunately, today the weather did not offer the usual blue sky, today we actually received quite a bit of rain.

So after lunch - another great little place in the middle of nowhere - we decided to skip the two big passes of the day (both over 2500m high) and take the easier route to Livigno. A good decision, because on this route, the weather changed quickly and the rain was replaced by wonderful sunshine. We crossed the border to Switzerland, adding country number four to the list.

Finally we reached Livigno, the beautiful town high up in the Italian Alps. 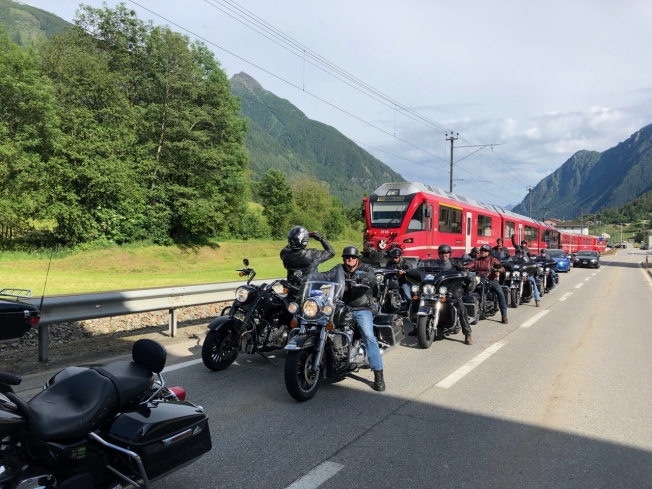 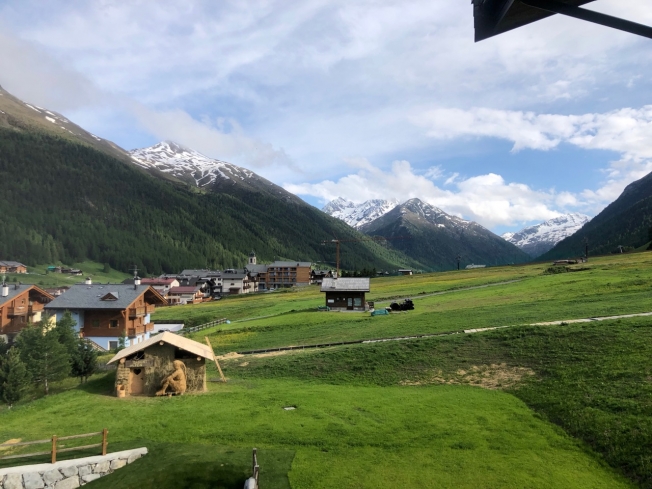 Rest day - after three tough days it was well deserved and some of us needed a little break from all the curves. Nevertheless about half of the group decided to follow the tour guide to Trento in the morning - a visit to the local Harley Dealer was the goal of the day. As the dealers in Italy are quite a bit smaller than those in the US, we made it back to Lake Garda just around lunch time. The afternoon was spent at the hotel pool or at the beaches of the lake.

And of course the evening was celebrated as usual - with a wonderful Italian meal, this time at a restaurant with a view of the lake. 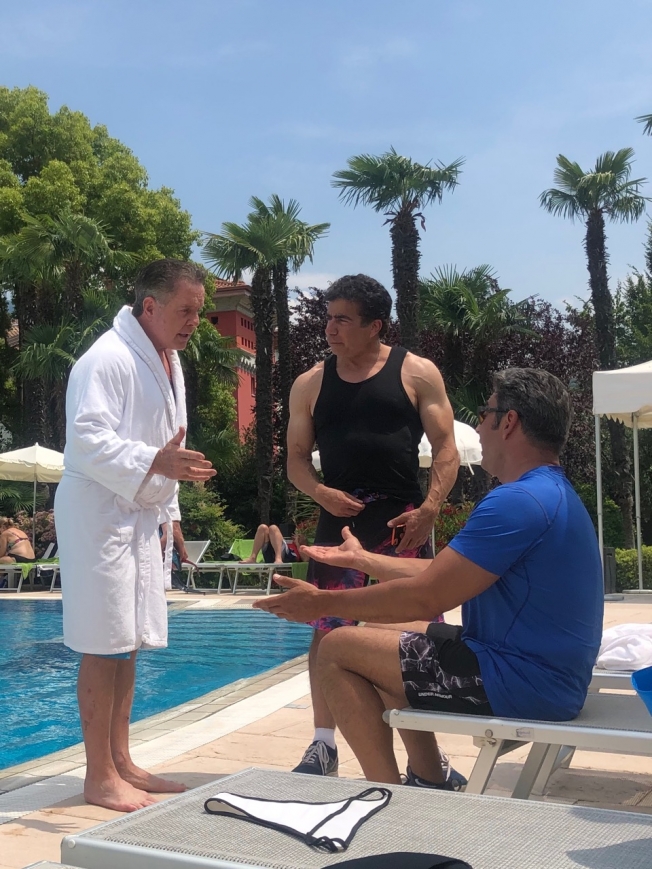 Pat, Steve and Raul seem to have a business meeting at the pool 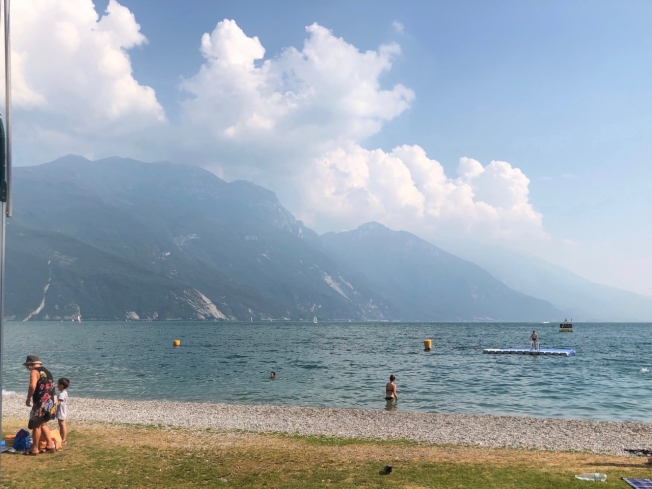 Ready for a swim in the lake? 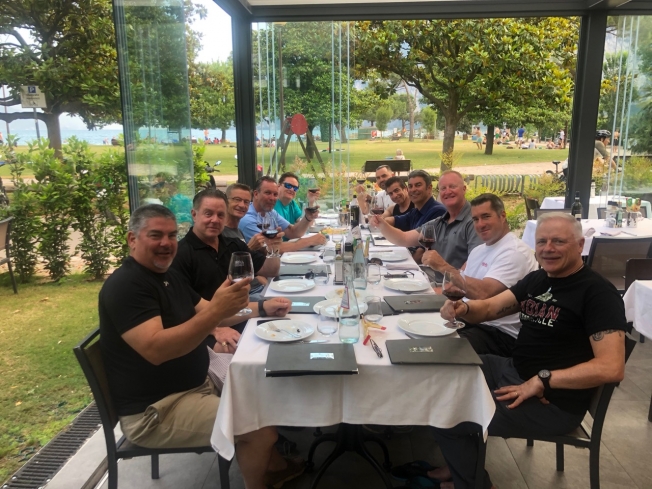 Today was split into two sections: the ride towards Lake Garda and the afternoon ride around the lake (with the help of a ferry). While the first part was more or less uneventful, the ride around the lake was quite impressive. Lake Garda is the favourite lake for many Germans for a reason: the scenery is breathtaking, the weather is already influenced by the Mediterranean Sea, and the food is typical Italian... 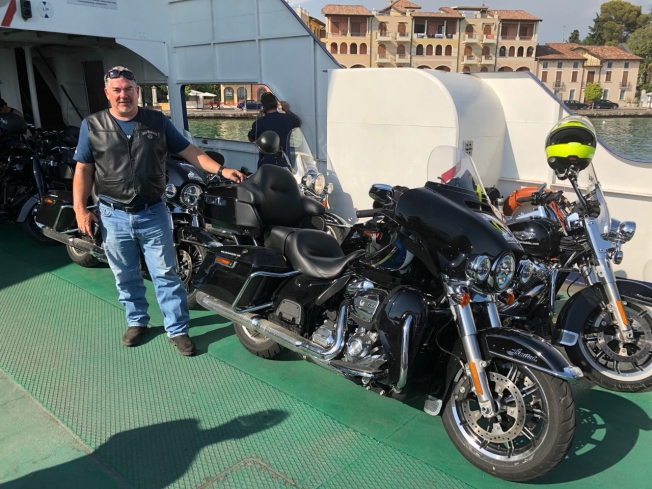 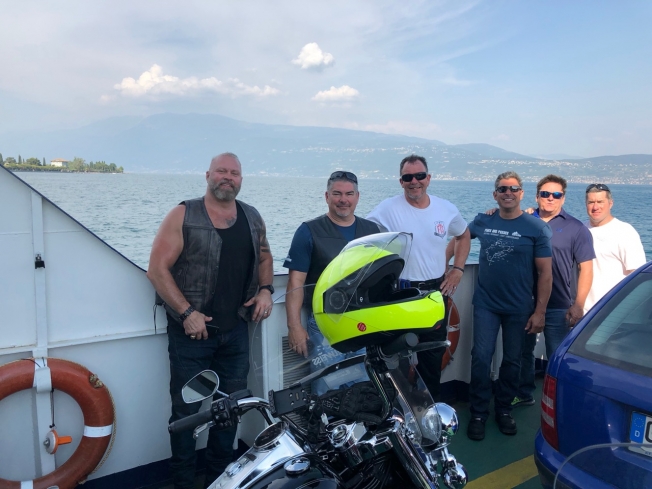 Heading east across the lake 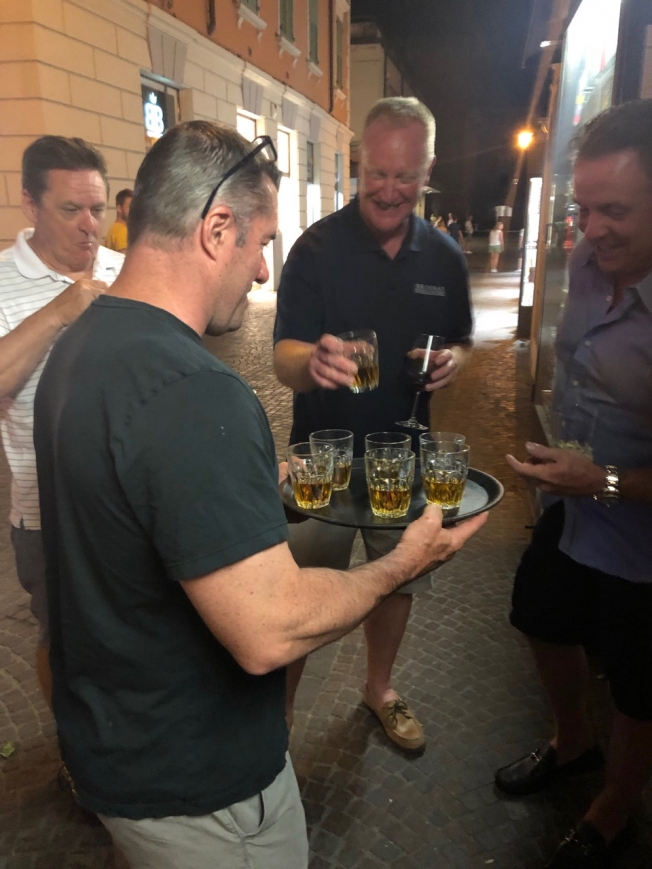 Steve, Jerry, Tom and Pat trying the (not so) local treats

The Dolomites - that was the big theme of the day! One of the most gorgeous areas of the whole Alps was on the schedule today, with lots of pass roads - some of them so narrow, that the traffic was controlled and the road only opened for a certain time in each direction.

After hundreds of turns and switchbacks, and under a perfect blue sky, we eventually reached our destination for the day: Klobenstein, high up in the mountains over Bozen. 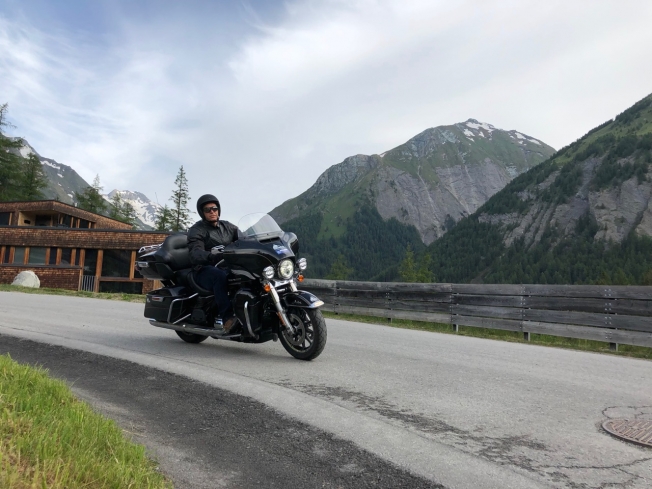 Jeff headed for the Dolomites 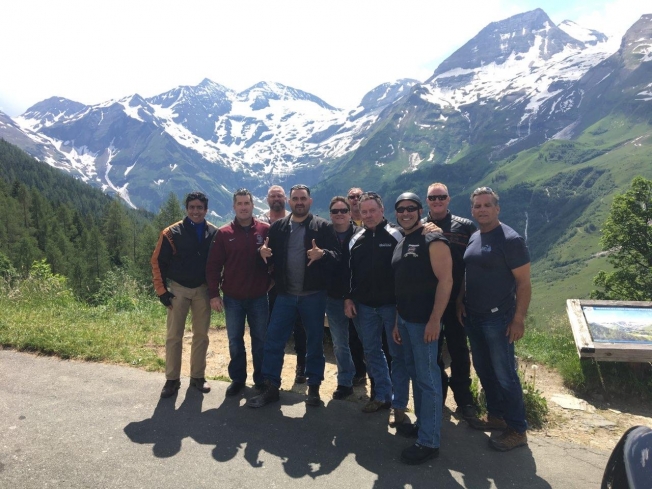 Fortunately the snow is far away!

After all the preparation and briefings, it was time to leave the hotel and get on the road. After a short ride on Austrian backroads we reached the German border. Now we followed the Isar river, until we stopped at a typical German Gasthof to try the German coffee and pastries.

We continued our ride through the Alps back to Austria. Achensee and Zillertal were next on our agenda, before we reached the Gerlos pass and the Krimml Waterfalls.

As the weather, which held the chance for a thunderstorm, looked promising, we took the chance to ride over the Grossglockner Pass instead of taking the tunnel. We were rewarded with an excellent road and great views, but eventually we did encounter the first half hour of rain on our tour.

But our wonderful hotel, hidden back in a wide mountain valley, made more than up for it! 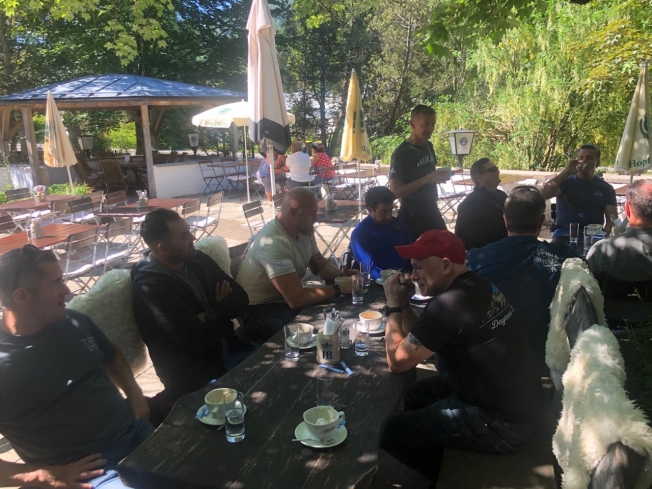 The first coffee stop in Germany 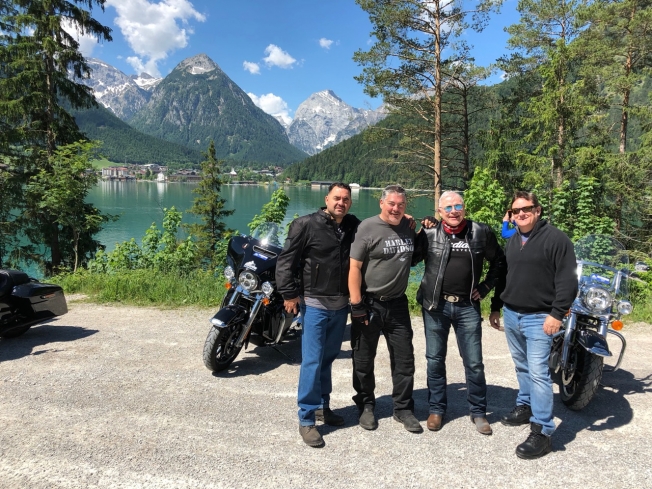 Rick, Greg, Kevin and Steve at the Achensee The Achensee in sunshine - unbelievable colors! Tom, Pat and Jerry in front of the Krimml waterfalls At the bottom of the Grossglockner Pass Tom has reached the Fuscher Törl, almost the top of the pass 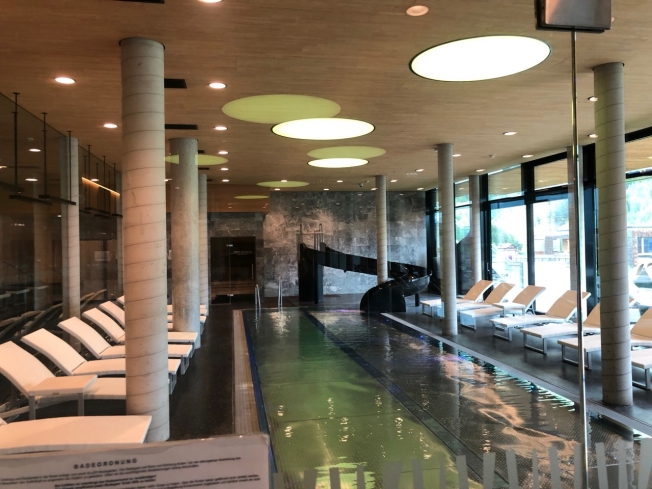 A good place to relax And here we are: location Seefeld in Tyrol, Austria. Time for a new Peaks and Passes tour on Harley’s. All our New York guests arrived safe and all are eager to go tomorrow. All black bikes in the garage are waiting for it!