best book there is, part 5: A Moment in Time 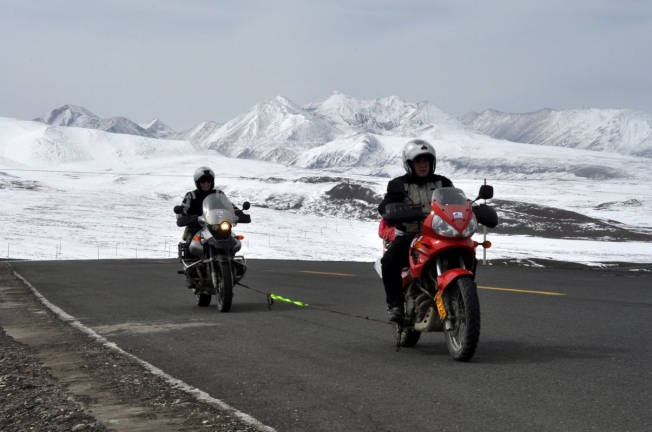 A Moment in Time

My wife, Janet and I were at a friend’s for dinner and one of the guests told a story of a recent trip to Europe where they toured by motorcycle. We were captivated and maybe a little jealous as traveling is our passion and we are avid motorcyclists. I checked out Edelweiss straight away and here we are 14 years later having participated in 10 motorcycle adventures with Edelweiss.

Our first ride was in Andalusia, Spain. From start to finish it was a perfect fit for us. The small towns, historic sights, beautiful food and of course wine, delicious wine made by each family restaurant in small batches. 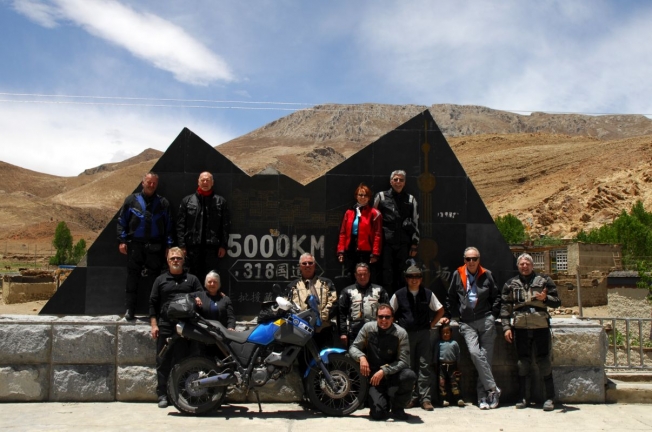 After several gentler excursions we wanted a bit more adventure. The 2010 Tibet ride was very challenging. Thomas, the guide for the Tibet ride we knew from a previous tour. He certainly earned his wages in Tibet. We rode all around Tibet and visited many ancient Buddhist monasteries. It seemed as if every day the route led us over a new high pass. The BMWs did not like it over 17,000 feet. They were often towed over the passes by the underpowered Chinese single-cylinder Jialing motorcycles. Nearing the end of our three weeks we spent the night in a small Tibetan village.  The next morning, we rose early (still dark) to prepare for our 90-mile ride to the base camp of Qomolangma (Everest). There was sleet, snow, and it was very cold, so there was a debate whether or not to go. There were seven of us and we all knew this would be our only opportunity to make this ride.

We started out winding our way up an 18,000-foot pass and then worked down the other side. It seemed like a thousand switchbacks. There were several inches of snow and I only had a small spot wiped clear of snow on my visor. After a grueling four-hour ride through snow, gravel, and deep ruts we arrived at base camp, nearly 20,000 feet. 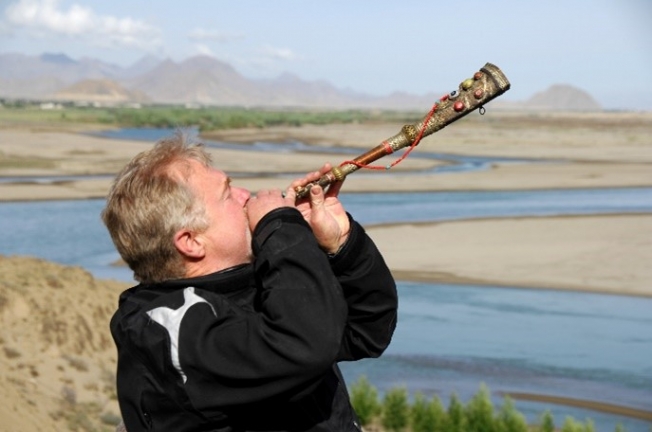 Our group was spread out and I, the only rider with a passenger was last to arrive at a tent where we were served Yak stew and a Tibetan favorite, Yak Butter Tea. The disgusting tea is 50% yak butter but at base camp, it was a needed sustenance. Janet was spent and could not do the trip down, so I commandeered a spot in a departing Land Rover for her.  Riding solo it was a much easier ride down. I stopped at the top of the pass of endless switchbacks. Though we were close to Everest, the clouds prevented us from seeing the mountain. A Sherpa I met on the pass told me Qomolangma would show herself at around 5:00 in the afternoon. Everyone had moved on except for Heinz, a German member of our group and a skilled rider. Heinz and I rode up to a rocky mountaintop. There was no road there, but there were strings upon strings of prayer flags on top. We hung out for about an hour. To our surprise, as if there was divine intervention, right at 5:00 the clouds parted and there she was, so huge and unbelievable.

All of the tours with Edelweiss have been incredible, but Tibet was the most memorable for us. I think that for Edelweiss it had to have been a logistic nightmare. It is to their credit that they have the quality of guides and staff to take on such rides.
Whether joining an Edelweiss tour or renting their motorcycles for our own rides Edelweiss does a great job. Congratulations on 40 years, and the adventure you have added to so many people’s lives.

best book there is, part 5: A Moment in Time