As usual on Edelweiss Tours, time is flying - and so are we! After leaving Sydney behind us, we continued to the north.  Beautiful beaches, unique animals and stunning picnic locations line the way towards Brisbane, where we will arrive tonight. Here are some impressions of the last two days: 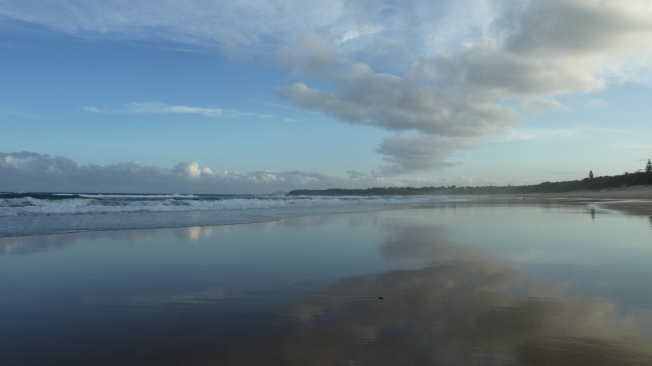 Our beach at the Diamond Beach Resort - not too busy... 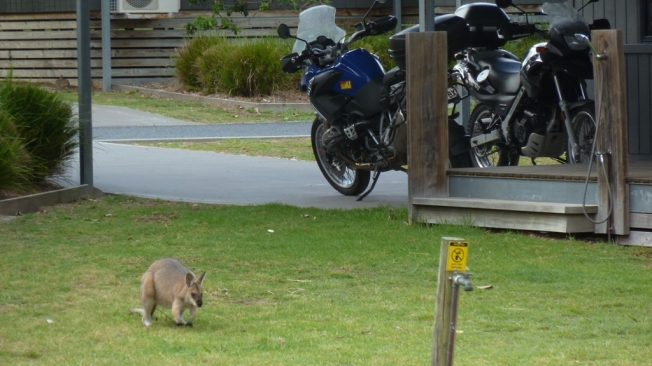 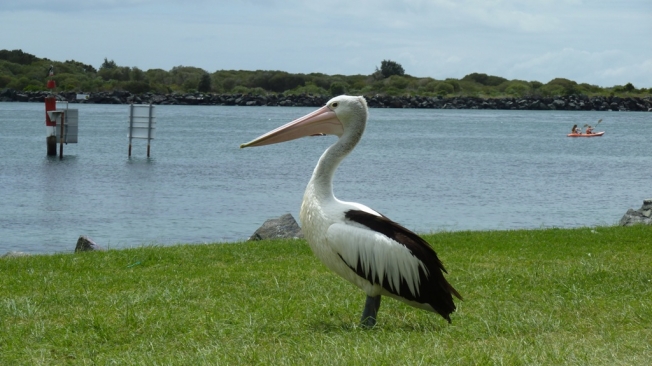 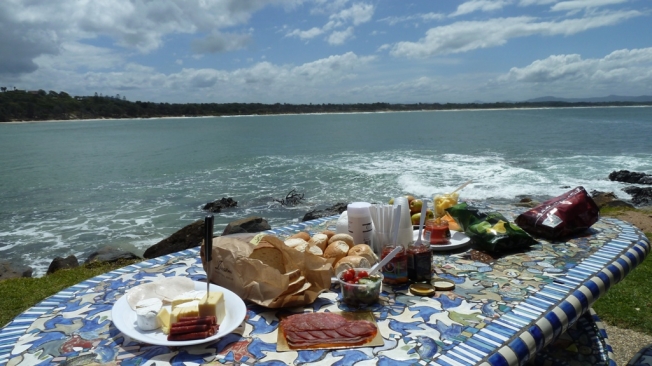 What a place for a picnic

The fifth riding day of the "Best of Australia Tour" brought us to Sydney today. The country's oldest, largest, greatest, most important and most beautiful city (according to the locals) greeted us with blue skies and sunshine - a pleasant surprise after we started today's ride in the pouring rain. We couldn't wait to get out and explore, so we immediately embarked on a walking tour. 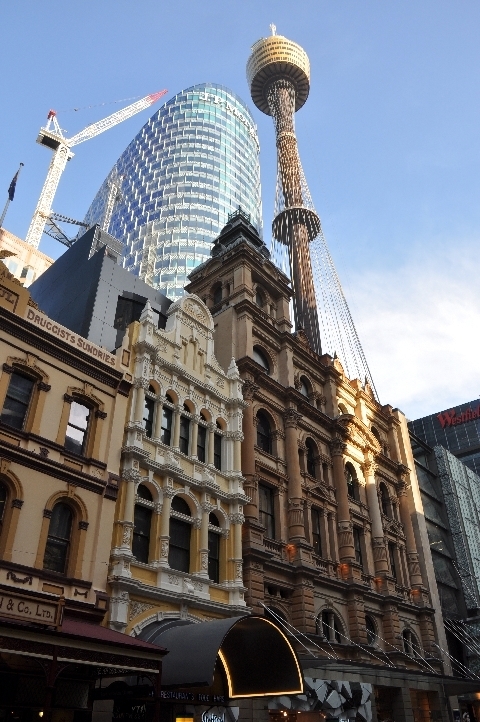 In Sydney, old and new buildings exist side by side. This view from the pedestrian zone served as appetizer. We wanted to go up, up, up!!!

First we headed to the Sydney Tower Eye. The city's tallest building (309 meters) features a viewing platform, located 250 meters above street level. Needless to say that the views from up there are absolutely breathtaking: 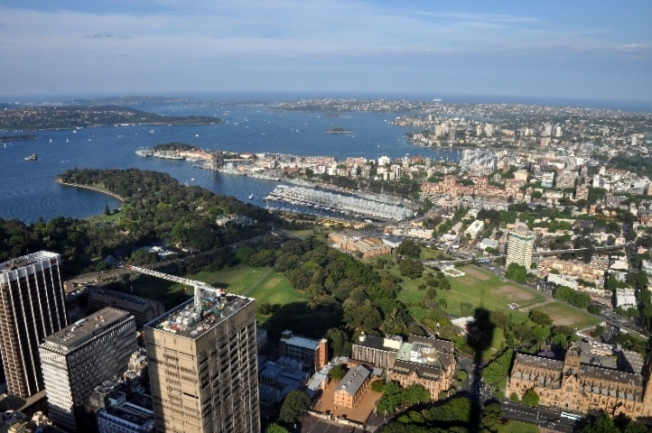 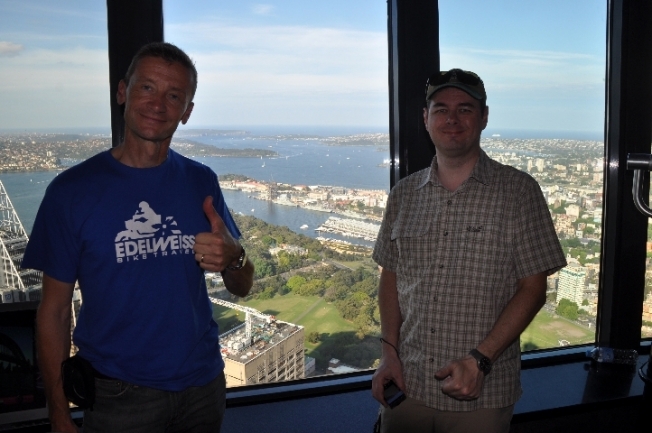 Once we were back on the face of the earth we continued our walking tour. We passed by the public library and found out it is on sale. We don't know how much it was before but we're sure it is a pretty good deal now! 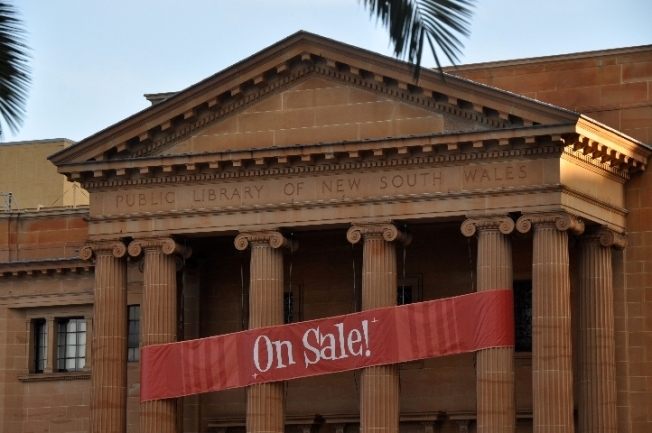 Then we finally saw the Sydney Opera House ("SOH"). At first we mistook the scenery for Egypt, but then it became clear: it must be it, the iconic landmark of city and country. 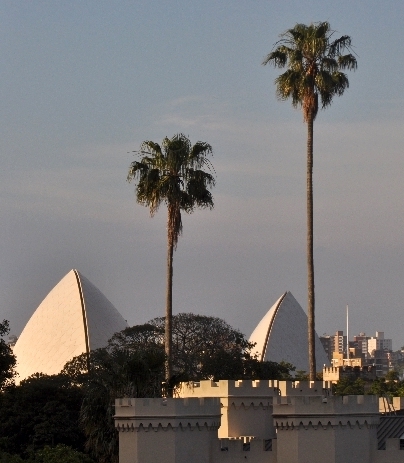 Get the cameras out, guys! It's the Opera House, yes it is!!! 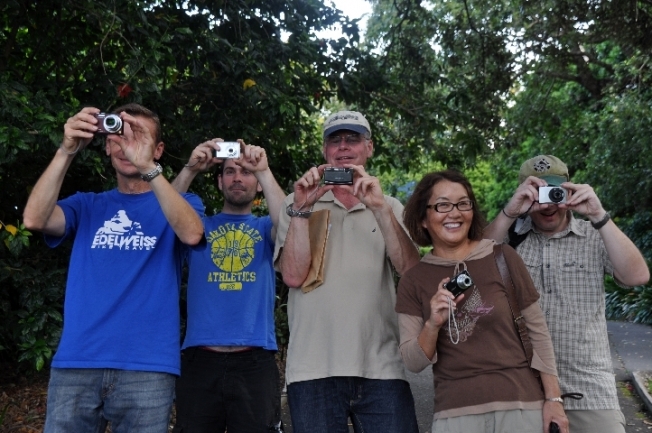 People had told us again and again how beautiful the SOH is, and they were right: it is just drop dead gorgeous! 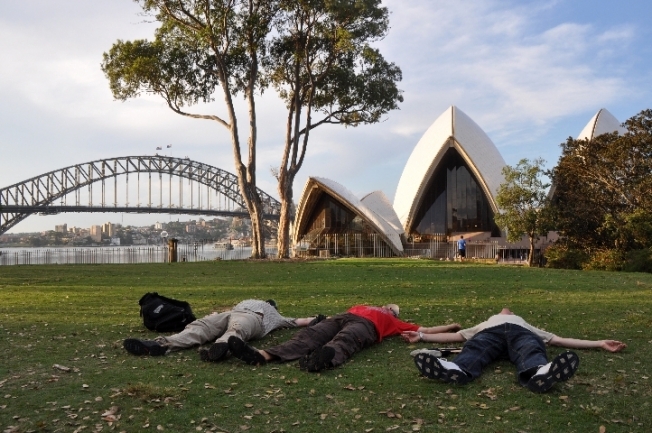 And just as we thought it couldn't get any better, somebody spotted a bar. It was right next to the SOH and we just couldn't resist. We had to have a beer, a fresh, cold Carlton Drought in this case, against this fantastic backdrop. Cheers! 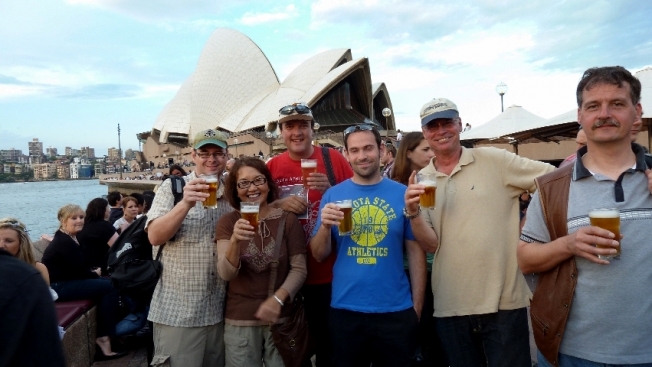 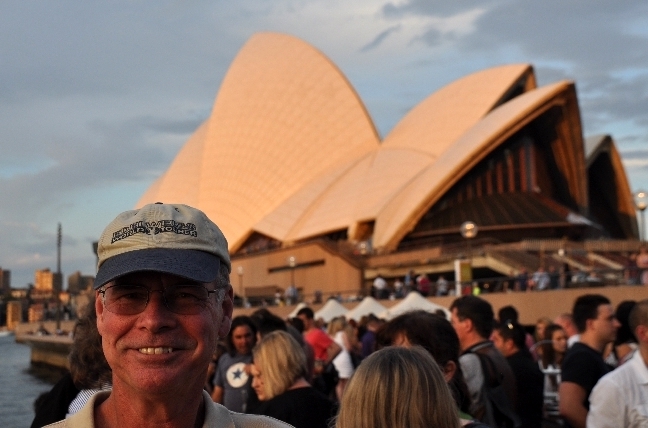 Peter has been an Edelweiss Worldtourer for a long time, this cap got around! Here you see it in front of the Opera House, on a Saturday night, mingling with the locals.

From our observation point at the bar we could see people climbing up Sydney's famous Harbour Bridge. The views from up there are probably even better then from the bar, but you're not allowed to bring your glass. So we stayed put. 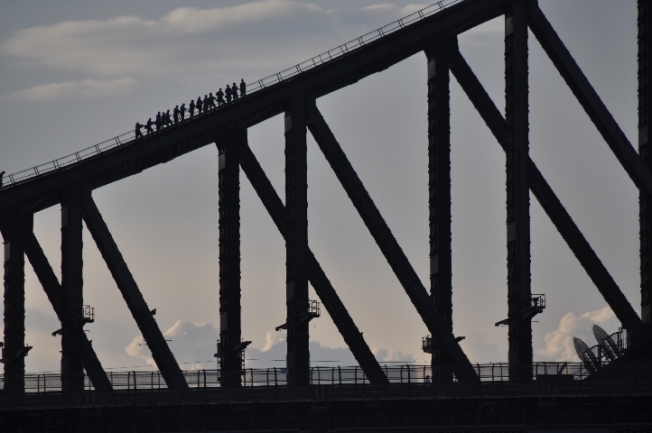 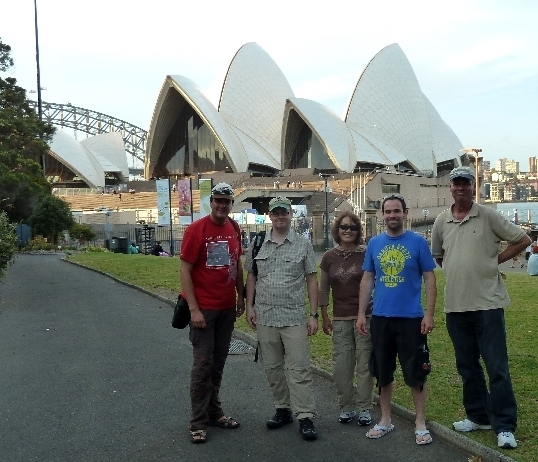 Sydney, we love you!

Ned Kelly, an outlaw/bandit/hero lived and "worked" in the mountains of northern Victoria in the 1870s. We rode through his mountains today, on beautiful, twisty mountain roads, enjoying the sun and the balmy temperatures as we went. Ned's uncle Harry Powers used to sit at this lookout (below, of course the platform was not there back then), waiting for hapless travellers who got then robbed and sometimes killed by his nephew. We just enjoyed the spectacular views across the valley towards the Snowy Mountains. 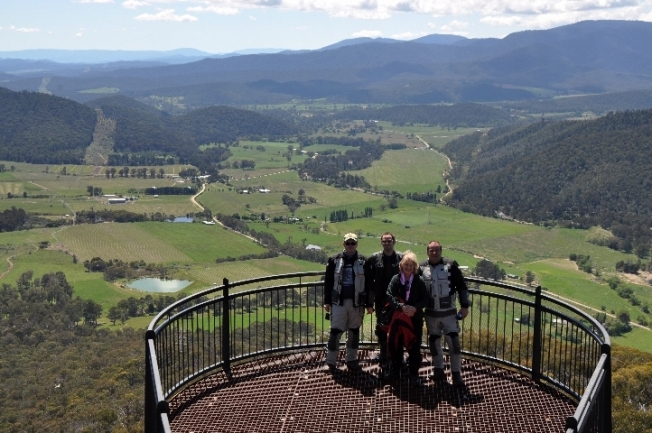 Two riding days are completed, we have seen the fabulous Great Ocean Road and some pretty countryside in Victoria. Here are some pictures of our accomodation, the beautiful Peppercorn Hotel in Yea. Do we need to mention that the food was outstanding? 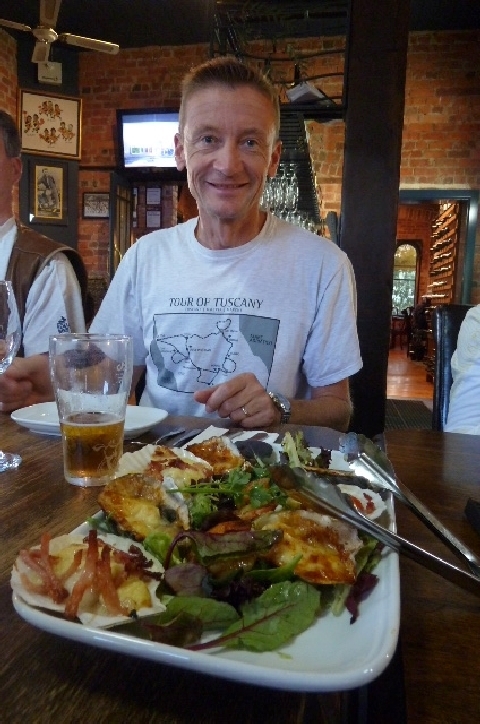 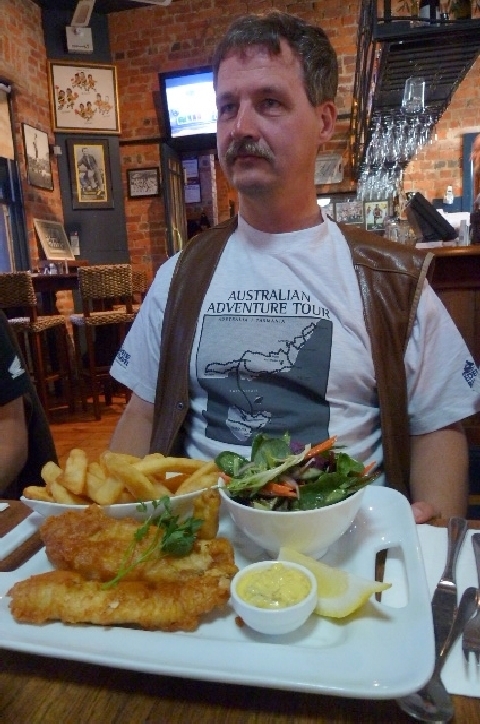 the new Edelweiss tour Best of Australia is starting! We leave Melbourne and its beautiful sights behind and head for the Great Ocean Road today. The first tour pictures will be added tonight, here are a few impressions from marvellous Melbourne: Bee
Monday, November 14, 2011 at 07:41
No beer left in Australia? Come back to Germany immediately,
we can help you!
Pics definitely show your great times in that great country!!
Love bee & Andreas & Sophie
Reply

Kai and Rolf
Saturday, October 29, 2011 at 16:57
Hi Atsuko,hi Peter,
typical gesture with the beer in hand,just how we are used to see you

Enjoy your tour !!
Kai and Rolf from Madeira
Reply

Peter Evans
Monday, November 14, 2011 at 03:27
Had a great trip as you can see from the pictures. looking forward to the next one with you. There is no beer left in Australia.
Pete
Reply
Facebook Twitter Google+