After two weeks of riding all over the South and North Islands of New Zealand we arrived in Auckland yesterday. It was a beautiful tour, a bit cold and wet at times, but still an unforgettable experience. Here are some impressions: 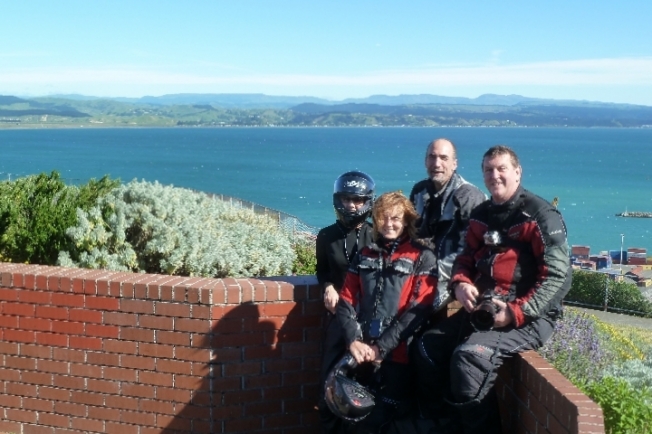 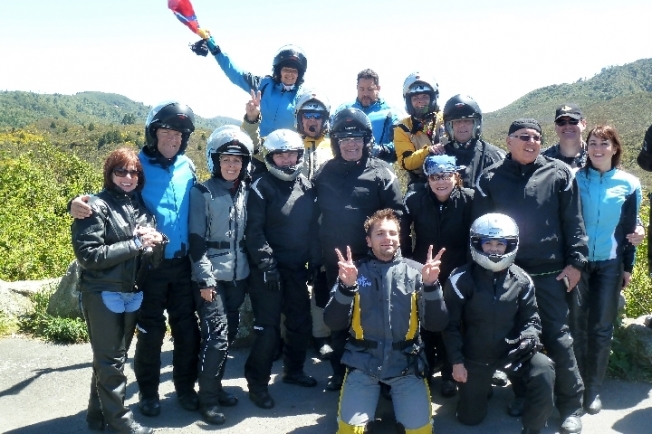 the Venezuelans are having heaps of fun 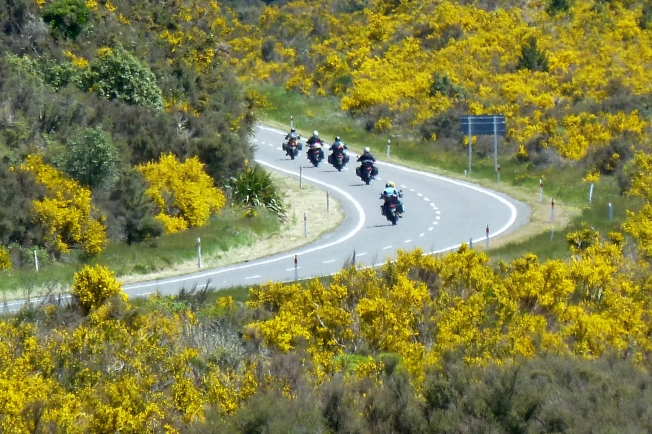 Heading towards the picnic @ Lake Taupo 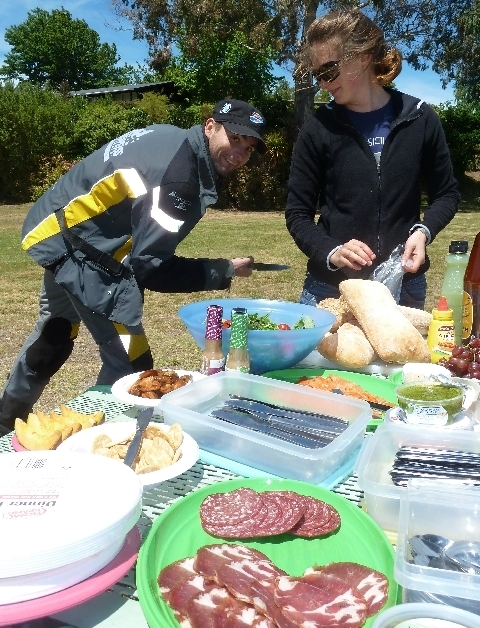 An Edelweiss Picnic is a true highlight of a tour. This was Katharina's first, and she did a great job! 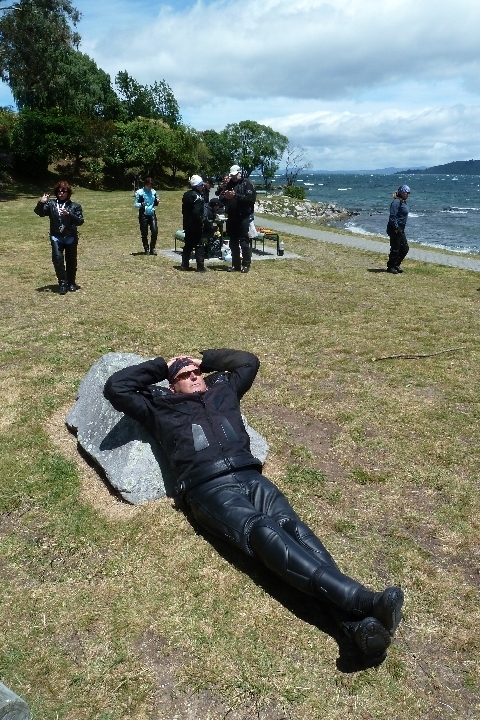 Jack from Canada is exhausted from sampling all the food. Time for a nap... 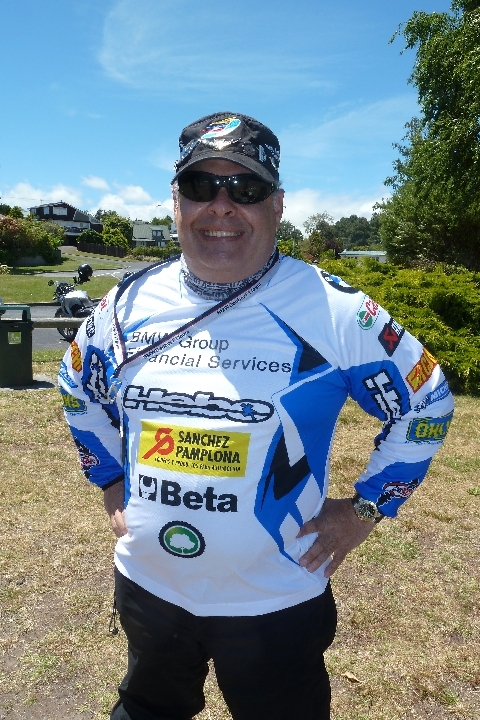 Jose, vice president of the BMW Club of Venezuela, would like to say hello to all his friends and sponsors 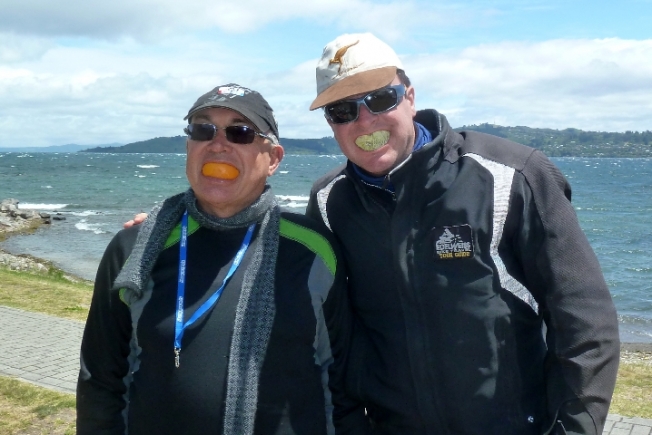 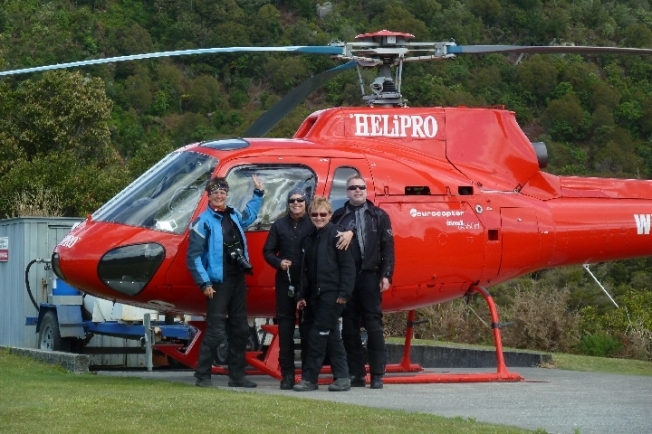 the Austrian/Swiss/German part of the group embarked on a heli trip to the crater of dormant volcano Mount Tarawera. 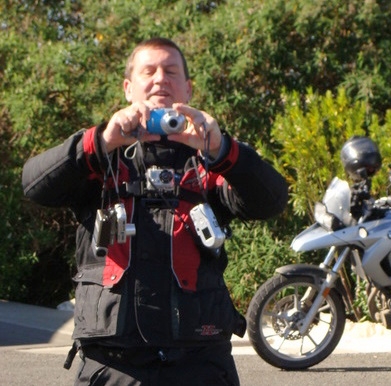 "Power Ranger" Mark can operate 9 cameras simultaneously. And that's while riding his motorcycle, backwards, with one arm tied behind his back...

The rainforest on the west coast of New Zealand's South Island is not simply fascinating and gorgeous, it is also a recognised World Heritage site. A walk through this wonderland is a beautiful experience, rain or shine. Karin, Gabi and Gabi enjoy it a lot. 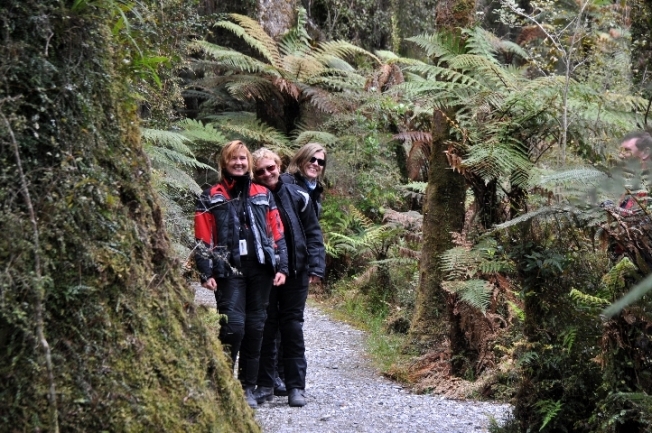 Low clouds and fog create a mystical atmosphere. No wonder the "Lord of the Rings" movies were filmed in New Zealand. 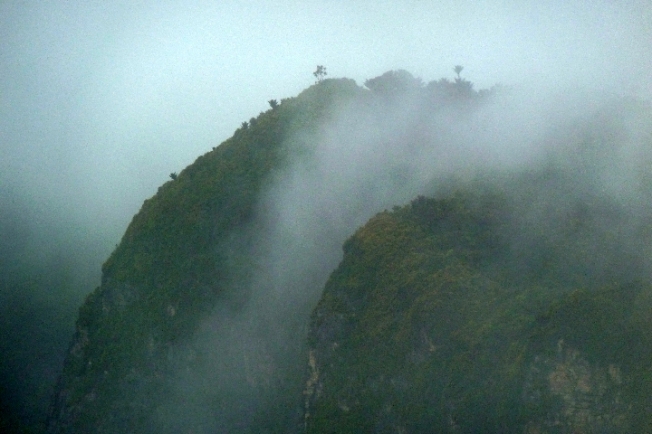 The Pancake Rocks are an unusual rock formation. They look like petrified stacks of pancakes, hence the name. To this day nobody knows for sure how they formed, but we do know that they are a highlight of the West Coast. 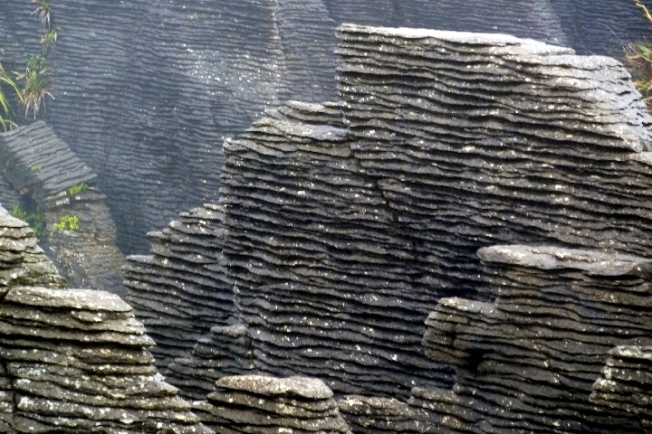 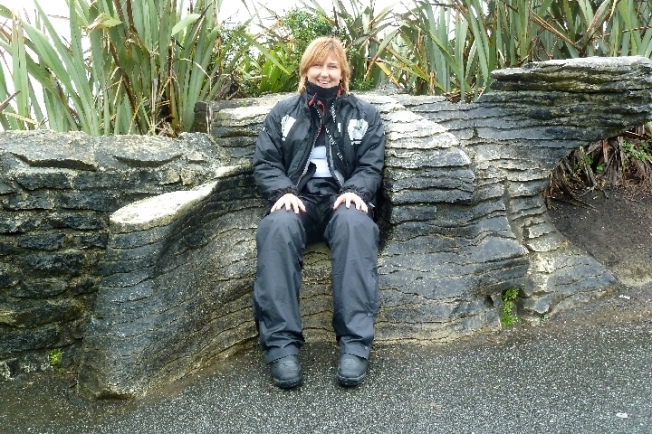 It rained for two days and two nights, with a constant wind blowing off the Tasman Sea. Roads were buried by mudslides or flooded by the swollen rivers. Linda and Scott are having fun, no matter what. We managed to get around all these obstacles, but we had to ride 550 km to reach our destination, the farm country around Motueka. A long day and an exciting one as well.

The next day the sun was out again. Heidi's Café in Havelock serves Austrian specialties like Apfelstrudel and Wiener Schnitzel. The coffee is great, too! Queen Charlotte Drive is one of the narrowest, twistiest and most scenic roads in all of New Zealand. The scenery is simply spectacular. Jeff and Meredith started thinking about buying this beach, but unfortunately it is not for sale... The rest day in Queenstown, the Adrenaline Capital of the World, offered plenty of opportunity for diversion. Amidst all the helikopter flying, jet boating, bungy jumping, hiking and shopping there was hardly enough time to ride the bikes, but we managed to ride to Blanket Bay viewpoint. It was well worth it, don't you think? For the last Edelweiss-Tour in 2011 we returned once again to the world's most beautiful end.  New Zealand is a place like no other: clean, pristine, incredibly beautiful, you have to see it to believe it.

Cornelia from Austria enjoys the breathtaking view of Lake Tekapo from Mount John: 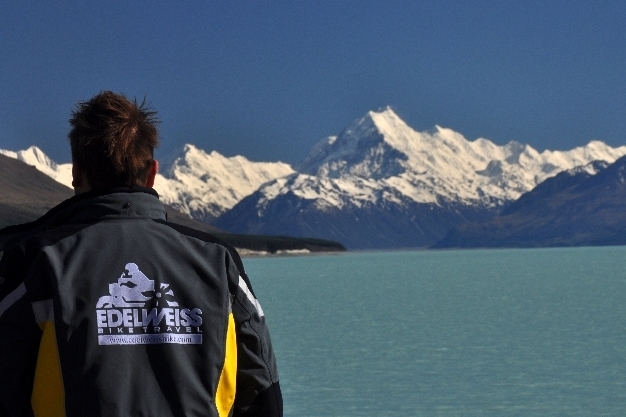 A happy bunch: 28 riders and passengers from 9 nations gather at Mt. Cook Lookout to take one amazing group picture. Smile! 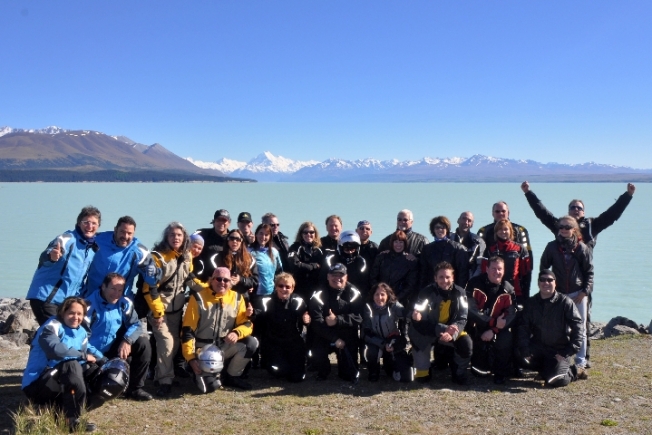 After that the group went on to experience an encounter of the third kind: with a New Zealand Merino sheep. Local farmer James told us everything there is to know about sheep and wool and showed us how they are shorn. 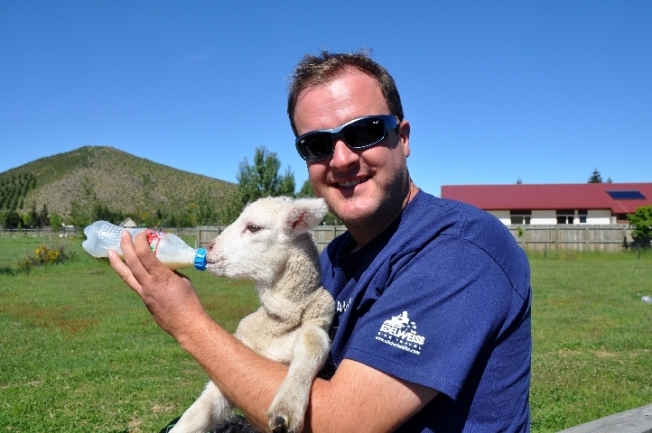 Sarah
Wednesday, November 30, 2011 at 22:16
heeey, a “red power ranger” as the protector of the hole tour group! what a service… so during this extension week the kiwis on the road have to watch out for the “hells androids”?

François
Monday, November 21, 2011 at 15:09
I was on a motorcycle trip through the Alps with Alan and I can tell you he also likes to get friendly with sheep...
Reply

Stefanos
Monday, November 21, 2011 at 10:58
Alan,
Every day....
Every year...
you become more and more exciting..
More and more crazy...
I hope that there is an upper level to your craziness..
Smile and enjoy your life
Congrats guys!
Stefanos from Athens
Reply

hope to see you soon stefanos!! still down there in the desert playing with the sand??? when in italy??

and plenty of fish'n chips ...

hope to see all of you again on a tour next year in Italy!!!
ciao

Have a fun and safe tour!
Karin
Reply

Tom
Thursday, November 17, 2011 at 04:37
Unfortunately Alan jumped butt naked to save money, so the photo is classified. And I can't handle the adrenaline anymore, feeding lambs is about all I can take. Sorry!
Reply
Facebook Twitter Google+