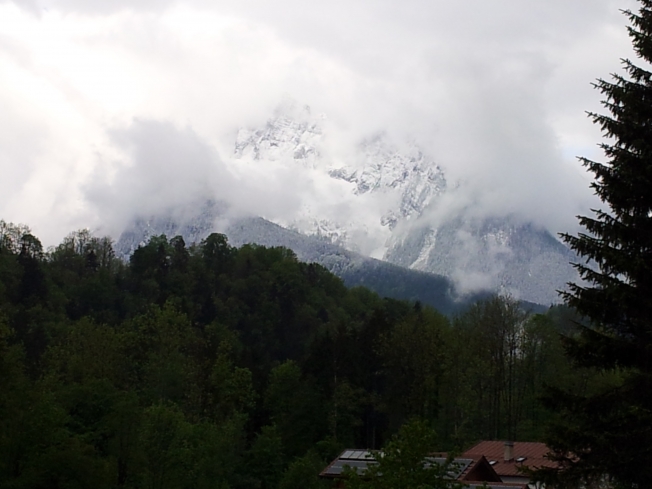 Morning has broken... I woke with a lurking question in my mind that's been keeping me from sleep: where is that goddamned mountain? That famous peak? That mamouth of a folklore ledgend which has fascinated travelers over eons of time? "Der Watzmann" 2713 meters high must be seeable nearby. Nearly every third lokality has claimed its namesake, named a drink or meal after it, painted it on the wall or posted fotos of some notorious person who has been here and posed with it in the background. And here I am... riding the whole day long around it and don't know if I have seen it or not, peeking out of some cloud that was drenching me with rain, laughing at me with it's magestic aloofness while the weather gods were pelting me with hail and snow.

And in fact the locals here are regarding me with some suspect. Claiming I should have known that it's the time of the hailed holy saints of ice (Die Eisheiligen) - a week in the middle of May when the jellous winter takes its last revenge and turns balmy steamy summer-like days of spring into a retaliating week of arctic coldness. I didn't know. I planned this week to prepare for my tour of Alps and Lakes© with Edelweiss Bike Travel from the vantage of Berlin where the Eisheiligen only means waiting a week longer before putting geraniums into the flower-boxes on the windowsills of the garden. I wasn't thinking of crossing mountain passes on a Triumph Tiger. Freezing to my seat, whishing I hadn't relied on goretext for hand protection, but instead brought mittens made of fleece and oilskin. I brought the day to an end just after the Schwarzbach pass near Ramsau. The cold survived. Rubber down and heads up all the way. A meal put me straight and I was off to bed. But in the morning as the first rays of sun beamed throuh my window, I was bothered. What do I do if guests ask me where that crazy famous mountain is, and I don't know? So I get out my maps and start purusing. But for the life of me, I can't find it.

I try Google but there is no reception in this little mountain cove. I try my map-app, but it's on strike like google. Damn! Where is that bugger? Back to the maps, combing every centimeter from Hagengebirge to Wilder Kaiser, from Salzburg all the way to Zell am See. And then I got it. Much too tiny on the map to account for its fame. Humbly written in micro-millimeter-letters barely a centimter fom my hotel. Checking the direction of the road that passes my balcony, I reccon the beast must be just outside my window. I get up and look. And there it is indeed. The Watzmann! Crazy, I think to myself. No wonder it was on my mind. I turn back to my bed, and there it was again. In oil hanging above my head all night. The Watzmann had been watching over me in sleep and whispering to me all the way: Don't you dare forget me... joung boy from Minnesota. For I'm the Watzmann who always sees you from far and near. Signing off. Pazlo Travels

Angela
Tuesday, May 29, 2012 at 23:31
Hey Paul,
I'm so glad you didn't get much closer to the Watzmann! You might have heard him calling "kimm aufi auf'n Berg" and then would have missed our fabulous tour

Fantastic pre-ride story!!!
Cheers,
Angela - one of the 3 heads of the Alpes & Lakes-BMW-Harley-Association

Susi Sausewind
Tuesday, May 29, 2012 at 17:37
Great description, Mister K.! I remember Montarto / Pyrenees ... the highest mountain on the whole route... in fog and snow. Well, we always have our imagination to help out, don't we?
Reply