We use cookies. By using our website, you express your consent concerning the usage of cookies. For more information as well as all details regarding the usage of your data, you will find our data privacy statement on our website: Link
Save this tour as pdf
Recommend this tourContact us 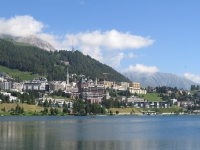 St. Moritz is the traditional destination for the rich and beautiful and the international jet set. No wonder, this place has developed from a renowned health and spa town into one of the most expensive ski resorts in the world. See and be seen is the motto for those who want to bring their money to the people in Switzerland. The Olympic Winter Games were held here in 1928 and 1948, and the World Ski Championships in 2003. Since the early 1980s, St. Moritz has become one of the world' s top ski destinations in competition with the well-known ski resorts in Austria (Seefeld, Lech am Arlberg) and Italy (Cortina d'Ampezzo, Val Gardena). Every winter the horse race White Turf takes place on the frozen St. Moritz lake, an important event for the international upper class. Don't worry, we'll keep you from the buying frenzy, we have chosen the perfect roads for you today!
At an altitude of over 1800m is the place where winter holidays were invented. The first ski school was founded here, and the Olympic Winter Games have already been held twice in St. Moritz, the last time in 1948. In addition, there is everything that a "man" or "woman" needs for a life of luxury: expensive boutiques, watch shops and exclusive hotels and restaurants.

The only castle built by King Ludwig II that was finished during his lifetime. Also his favorite place and situated in a beautifully landscaped garden. It is located in one of the valleys where the Bavarian kings used to hunt. Built between 1869 and 1879, it resembles a French palace. The King‘s soft spot for the German composer Richard Wagner was expressed in the building called the Grotto, which interprets a scene from the opera Tannhäuser.

This area was settled by the Romans in 15 BC. General Nero Claudius Drusus, to whom the name of the first settlement in the area refers to, set up this army camp by the River Isarco. The village founded nearby was called Bauzanum. Since its foundation and elevation to a town over 800 years ago, Bolzano has been a trading point. The main reason for this was its location in between the two major cities of Venice and Augsburg. Four times a year a market was held, and traders came from the south and the north. Therefore, a mercantile magistrate was founded in 1635. Every market season, two Italian and two German officers (appointed from the traders who operated there) worked in this office. The city was a cultural cross point at that time. The city's Italian-Austrian character, enhanced by the narrow cobblestone streets, Habsburg-era churches and pervasive bilingual signage, provide for the unique charm of a city halfway between Italian and Austrian cultures. Together with its natural and cultural attractions, this makes Bolzano a renowned tourist destination. Enjoy the great mixture of the Italian-Austrian lifestyle and cuisine in the wonderful historic centre of Bozen. The archaeological museum in Bozen has the more than 5000 years old Ice Man at display. The "Oetzi", as he is called, was found in the mountains right on the Italian-Austrian border. Thanks to his discovery, many secrets of the way of life during his time in history could be revealed.

Lake Como has been a popular retreat for aristocrats and wealthy people since Roman times, and a very popular tourist attraction, which boasts many artistic and cultural gems, and is famous for its numerous villas and palaces. Many celebrities have or used to have homes on the shores of Lake Como, such as Matthew Bellamy, Madonna, George Clooney, Gianni Versace, Ronaldinho, Sylvester Stallone, and Ben Spies.

Inquire your private tour date for you and your friends.

A van for luggage transportation will be available. Since it does not follow the tour group route, it will arrive at each day’s hotel approximately around 5 pm. There is limited space for tour participants to ride in the van on certain days, however, the van will not go the same route that the group does.

On these tours there is a support van for luggage transportation. As a matter of safety this van will follow the motorcycle group on most of the riding days. Therefore, participants luggage will not arrive at the hotel prior to the group. On some tours the support vehicle is an open pick-up. In these circumstances, participants will have to re-pack their luggage into waterproof luggage bags. On some days there is limited space for tour participants to ride in the van.

These tours will be accompanied by an escort vehicle for safety, service and first-aid only. The participants need to pack their belongings on the bike.

On these tours there is no van available. The participants need to pack their belongings on the bike.

On these tours the group rides on its own (there is no motorcycle mounted tour guide) while the tour guide brings up the rear, driving the support van and transporting the luggage. The tour guide will be at each stop to fulfill his/her travel accompaniment duties. No tour guide on the motorcycle accompanies the group.

Edelweiss will transport the luggage of the participants from hotel to hotel.

This is a self-guided tour without a tour guide. 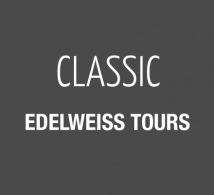