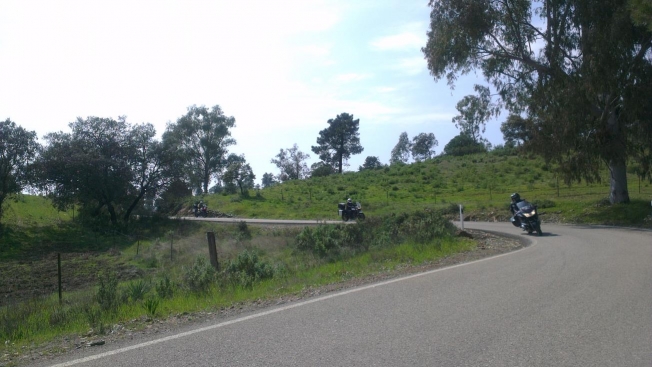 Out of Lisbon and onto the kart racing track. You'll never know how much fun it is unless you try

Here is Joan a couple of minutes before the start. 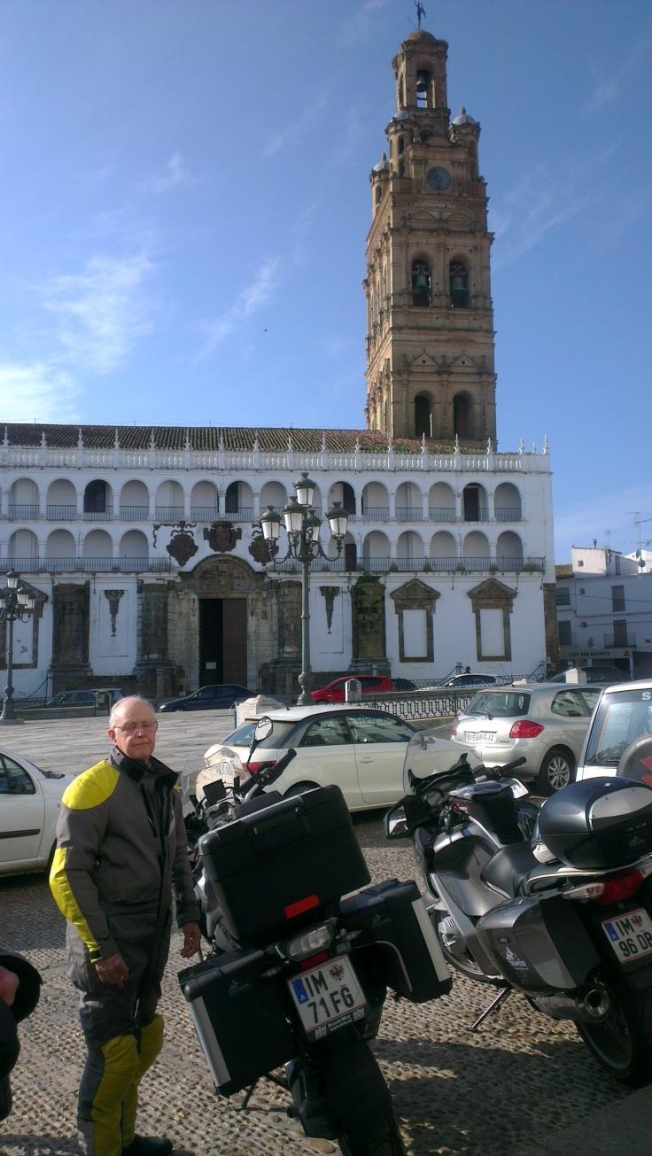 Brant and his GS in Llerena.

What a fun these roads are in Andalusia... Randy, Joan and Peter enjoying themselves 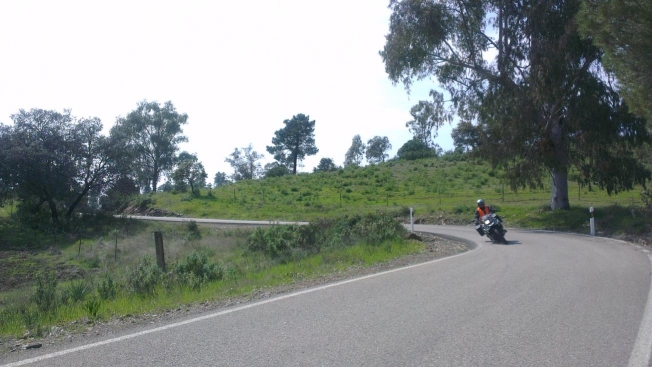 Alban from Germany - I can tell you, he was twisting his bike through these curves! Bob and Peter - ready to go on

What a stunning landscape!

In the middle of nowhere, without any traffic - a bikers dream, istn't it? 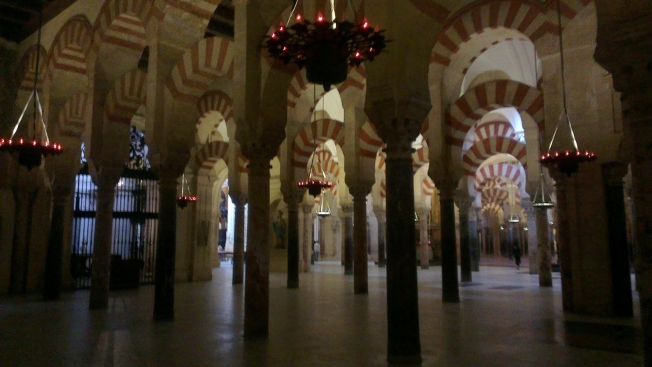 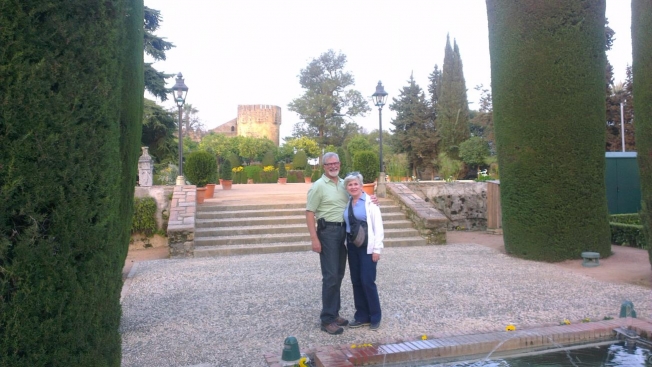 Randy and Joan in the palace's gardens... 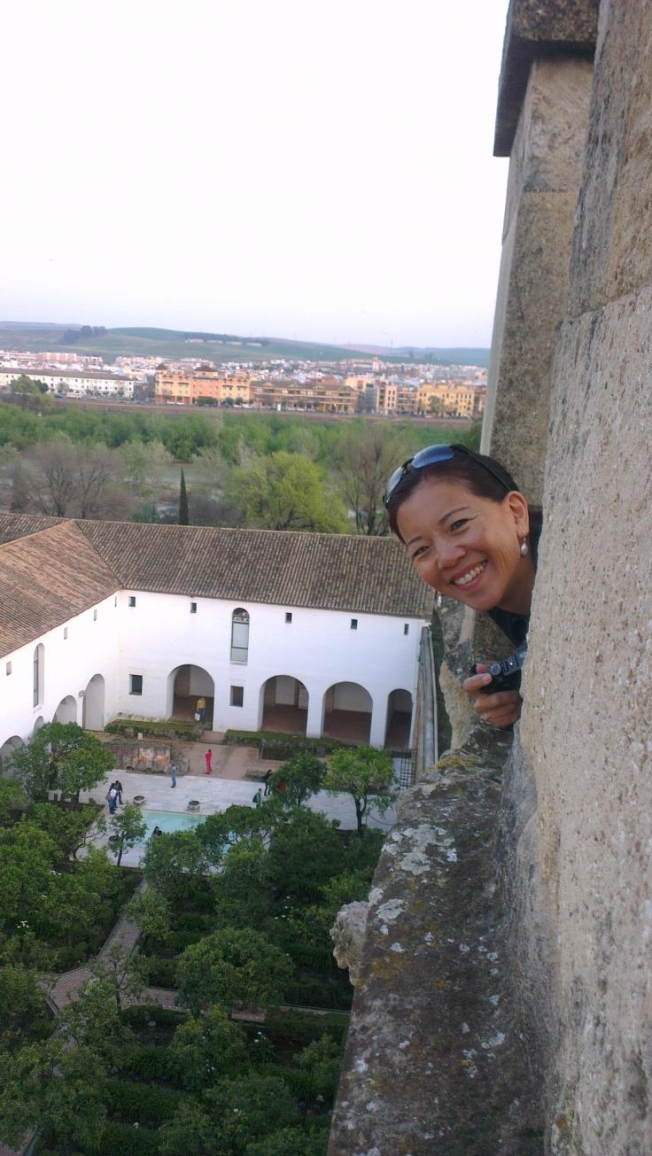 The view from the palace's tower over Cordoba

Our last riding day brought us back to Malaga.

But before, Alejandro prepared a mouthwatering picnic which, of course, none of the tour members could resist 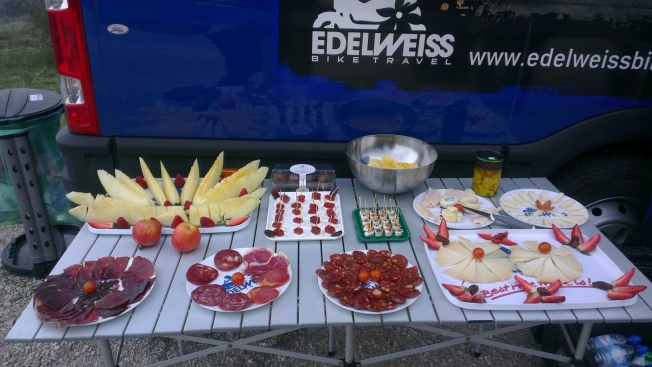 Welcome to all our motorcycle enthuthsiasts around the world!

For a couple of riders from Israel, Germany, Canada, USA and Australia, the motorcycle season has just started with our Edelweiss Christopher Columbus tour!

We have already been on the way since a couple of days through Spain and Portugal. Meanwhile we have arrived in Lisbon (or Lisboa  as the Portuguese say).

We started the tour out of Malaga at  the Costa del Sol and were navigating our bikes on the winding Andalusian roads towards Sevilla.

Ronda - our first stop on the way to Sevilla

Being the biggest city of Andalusia, it goes without saying, that we had to spend a day to see some of Sevilla's attractions. 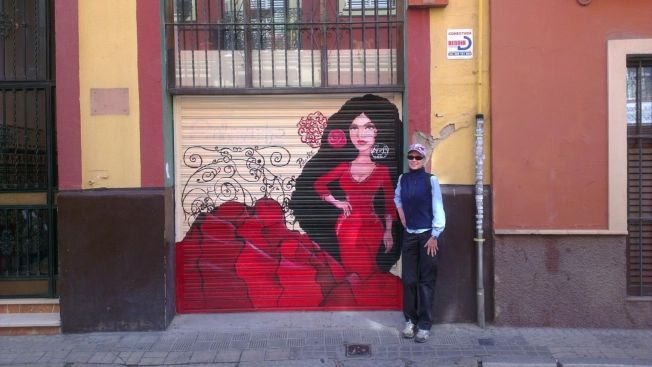 Julie from Idaho liked the paintings on the garage doors

Julie and Scott from Idaho, Randy and Joane from Canada, Peter from Australia and Hannah & Michel from Israel in front of the Parasol construction. Everybody in Spain is getting prepared for the 'Semana Santa', the Holy Week. Some more highlights in the evening... 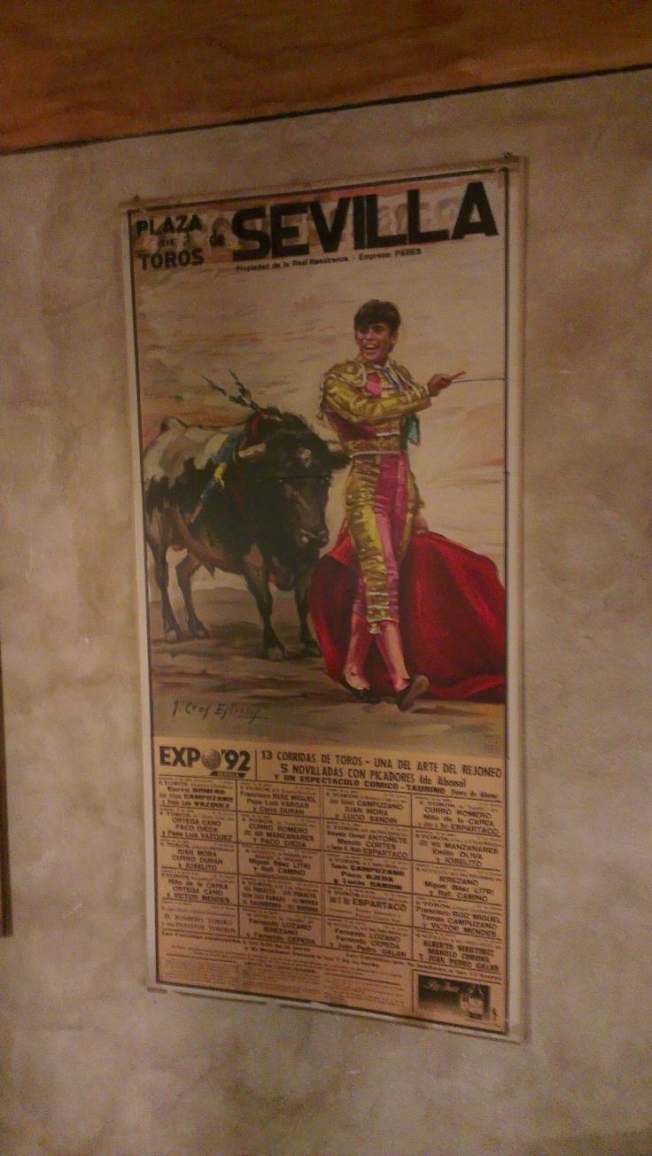 We found a very nice Tapa bar and enjoyed the good food. 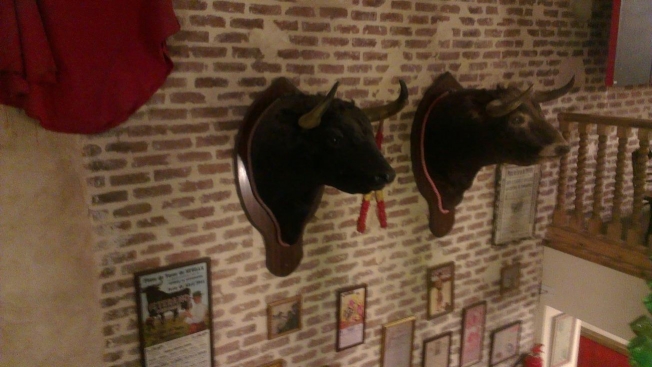 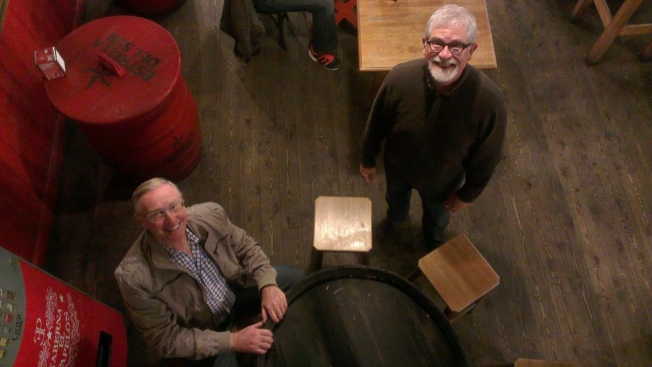 The biggest highlight of this evening, though, was the Flamenco show, I'd say! Wow, definitely worth every minute!

Unfortunately, I was allowed to only take this picture...

...So I'm afraid there is no other chance for you but to come on tour to see this fabulous show 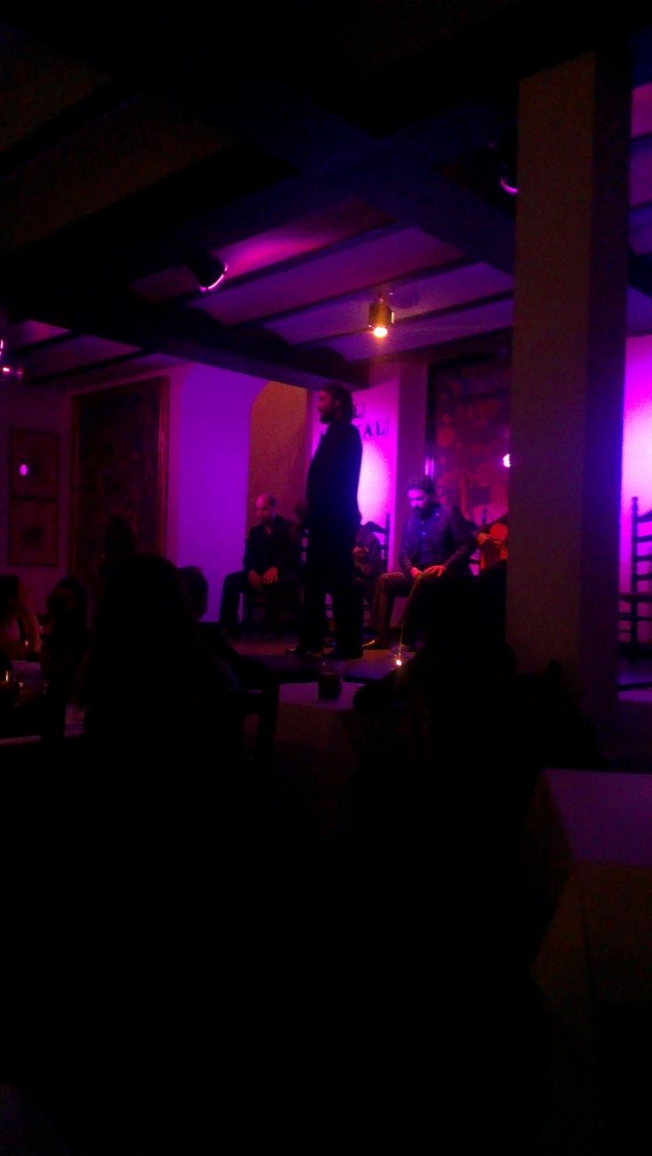 The next day brought us directly into Portugal. Everybody was happy to have that extra hour the Portugese present you when entering their country.

Amazing winding roads in the Monchique mountains and the famous rocks of the Algarve were the treasures to be found on the way to Portugal's Atlantic coast and the famous Edelweiss picnic.

Behind the scenes - shopping for the picnic

This is Bacalhau - Portugals speciality fish.

Cork trees along our route made for a nice scenery into our next destination Santiago do Cacem and also on the following day which brought us into Portugal's capital Lisbon.

At the Castelo Sao Filipe next to Setubal

On the way, however, we stopped at the beach for lunch and at the Cabo Sao Vicente which is the southern cape surrounding Lisbon.

Breathtaking views, I can tell you! 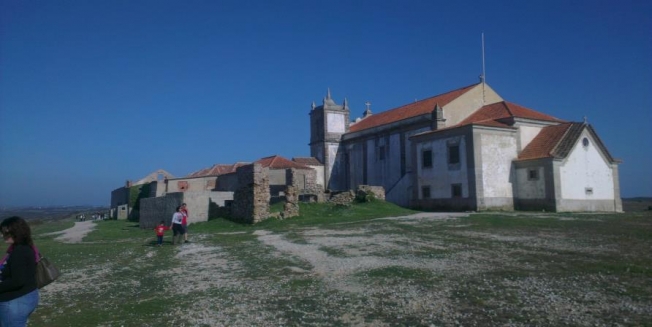 Lisbon without a restday? There are way too many sights to be seen to not have a look at least at the most important of them! 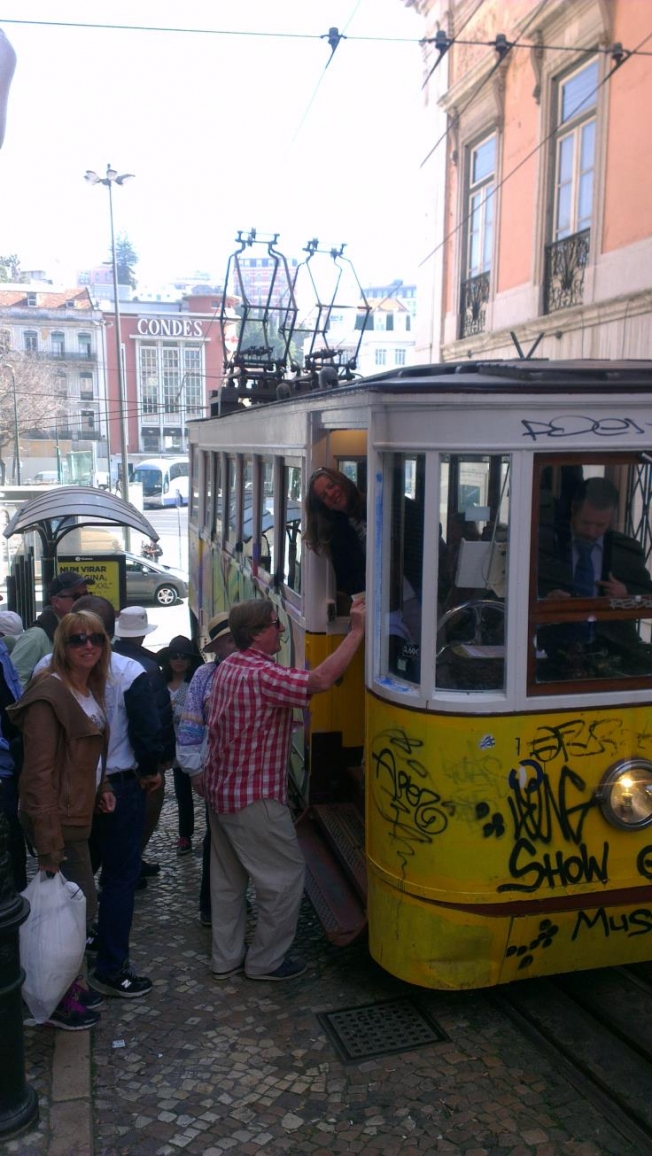 Climbing one of Lisbon's seven hills by tram... ...not sure about the conductors, tough...

Impressive - the "topless" church next to the Bairro Alto 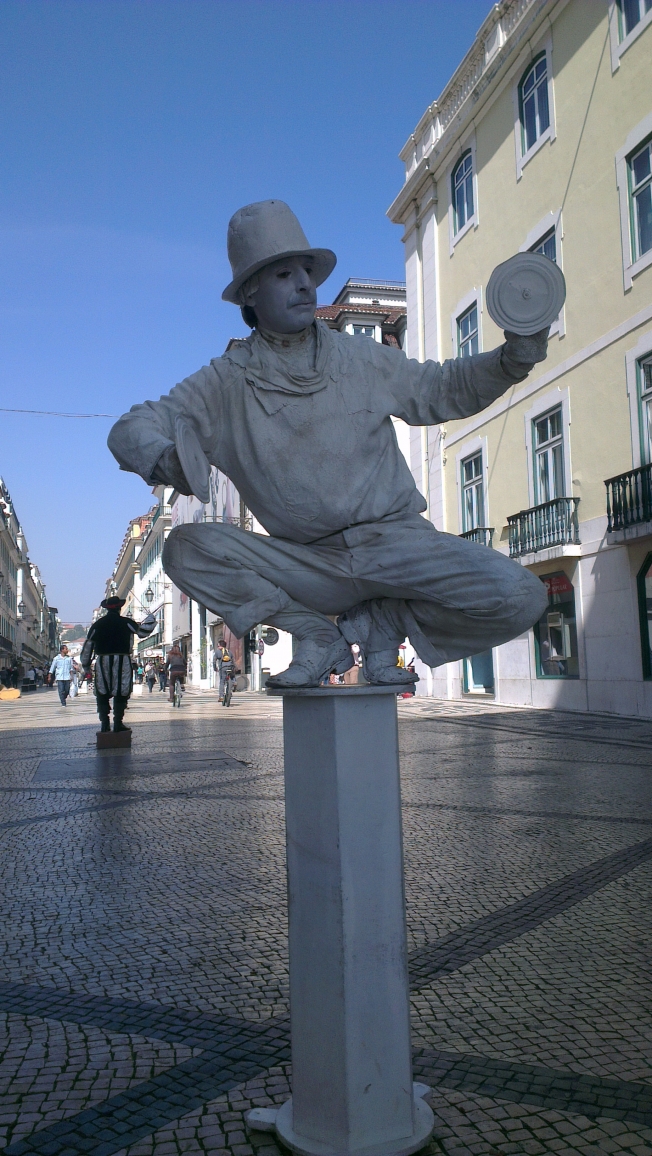 Incredible these artists! We all agree that there must be somebody at the end of the day to pick up this guy with a crane

Praça do Comércio right next to the river Tejo 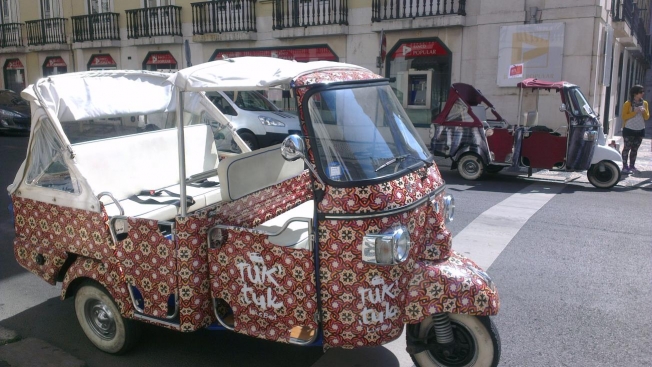 And here is our adventurous vehicle that brought us out to Belem... What a fun ride I can tell you ;-D

The Mosteiro dos Jerónimos out there at the Belem neighbourhood. 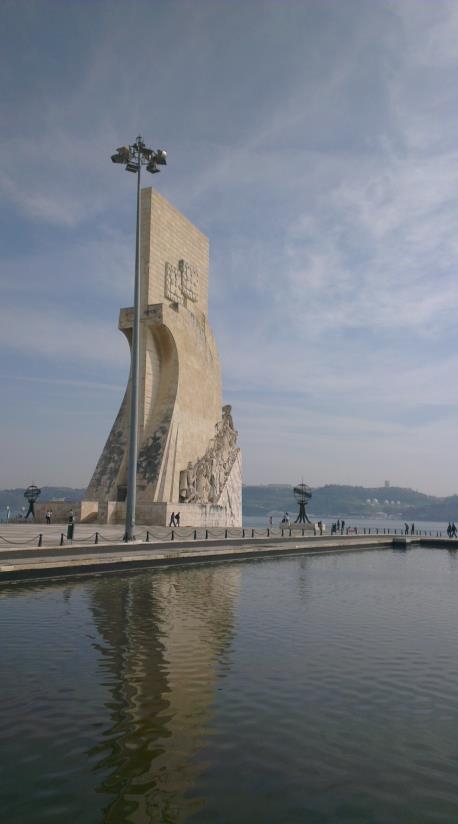 The Seafarer's monument with 'Henry the Seafarer' at the front. He was the one who initiated Portugal to become Europe's seafaring nation number 1.

Walking through Lisbon and learning about all the sights was impressive already! But at the end of this day everybody was flabbergasted by the Fado singers at our dinner in one of the city's best Fado restaurants. 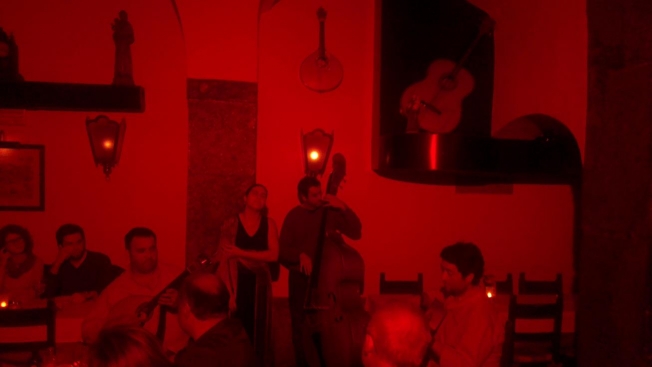 Aluizio Gibson
Saturday, June 7, 2014 at 04:49
Hi Angela, Alejandro, Brant, Donna and Gary,
What a beautiful trip and a very Nice Group!
We miss all of you and the stunnig landscapes of Alps remain in our minds every day.
Unforgettable!
We hope you've ejoyed Spain and our Mother land Portugal.
Aluizio and Marcia
Reply

Angela
Monday, April 21, 2014 at 11:28
Hello to Studio Flamenco,
Thank you for your kind words.
On my tours to Spain I learned about the different styles of Flamenco and each time I was absolutely amazed by the performance! A fantastic art of dancing!
Are you located in Spain?
Regards,
Angela
Reply

Peter
Sunday, April 13, 2014 at 04:18
Hi to everybody
Thanks to Angela and Alex for looking after us so well, a fabulous tour and the best group of people to share Spain and Portugal with, hope you all arrived home safely.
For my part its now back to the "real world" BUT the big news is I have been online and booked for Morocco for March, April 2015........so my fellow Christopher Columbus travellers I hope to see you all again next year in Africa.
In the mean time safe riding and keep smiling
Peter
Reply

I am looking forward to seeing you back again on the Morocco tour next spring as well as the other fellow travellers !!! For sure I will be there, too

michael
Sunday, March 23, 2014 at 14:25
angela+alex many thanks for abest trip with you 'the group was wonderfull'
the guide also thank you edelweiss and see you in the next trip
to morocco,best regards to doris and karin.
Reply

Angela
Tuesday, April 15, 2014 at 12:53
Thank you Michael & Hana,
It was nice to have been on tour with you again!
I wish a pleasant trip for you on the Morocco trip! Enjoy!
Ride safely,
Angela
Reply

Angela
Thursday, March 20, 2014 at 23:07
Hi Linda & Pat,
That's great hearing from you!
Our tour was great fun! Great people and among them, of course, Julie & Scott. I will certainly pass on your greetings.
Hope to see you again some time!
Angela
Reply
Facebook Twitter Google+