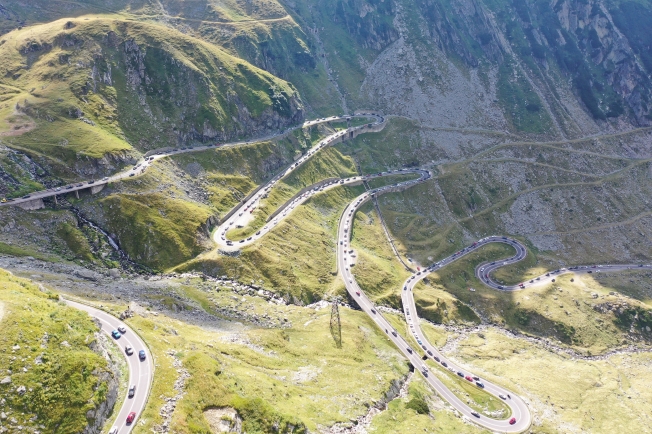 In August 2019 I was on an „Eastern European Delights“ tour with two tour guide colleagues and a group of twelve fearless riders. After starting in Vienna and crossing three countries, we had made our way deep into Romania. On day seven of our tour, we were all looking forward to riding the Transfăgărășan road, the most famous pass road of Romania, that provides more than 50 km of nice turns, scenic views, and an ascent to 2042 meters (6700 feet) above sea level. So this day was supposed to offer everything you can expect from a sunny day on a motorbike in the Carpathian mountains. Well, my day turned out to be a little bit different…

We had just turned onto that famous road at the very bottom when the riders behind me suddenly stopped at the side of the road. I turned around to find out what was going on and Ken, one of my fellow riders, told me that the clutch cable of his S1000XR just had broken. This was nothing new to me. For any strange odds, I seem to be the only tour guide where those XR clutch cables tend to break on bikes I am not even riding. At least this left me, after two other encounters on different tours, in the position to know that there was no easy fix for that right on the spot. So Ken and I switched bikes and with the support van far away, I tried to make my way up the pass road starting off with the starter motor and using the clutchless quick-shift function of the bike. It worked well for quite some kilometers, but as I was getting closer to the top, the traffic was becoming denser and denser. It was a Sunday after a national holiday, and it seemed that every single Romanian had the idea to drive up this road on that particular day. I could not believe my eyes when I saw a kilometer-long queue of cars not moving at all on both sides of the peak. I was lucky to be on a bike and squeezed my way through quite well, but due to oncoming traffic, I had to stop at some point, which meant stalling the engine. I did a few attempts to get the bike going again, but the slope of the road made it impossible and left me stuck with my group long gone. Luckily the second part of our tour group, led by Roger, was coming up that road just a few minutes later. So I hopped onto the pillion seat of his bike and we made it up to the top, leaving the XR behind. 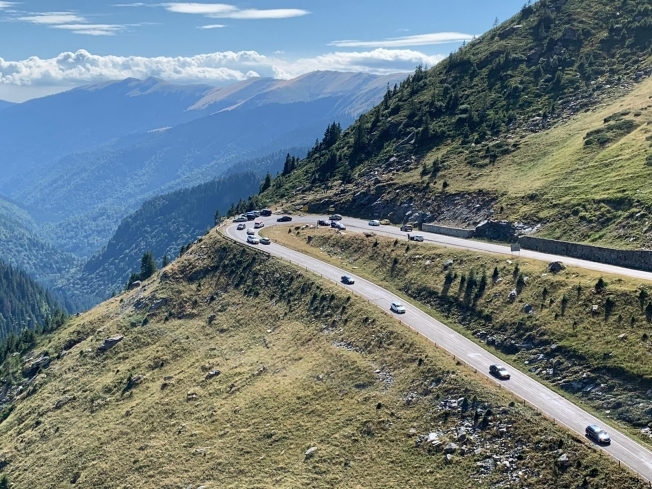 About an hour later, the group was already on their way down on the other side of the mountain. Roger and I were thinking about a solution to get the broken-down bike up to the top, from where we could roll it down on the other side with the engine off, towards William who was already on his way with the support van but needed another 2 hours. Our idea was to tow the bike up the hill using Roger’s Suzuki, so we asked a few people for a rope. But nobody could help us. Then it suddenly came to us, as we saw a booth selling leather waist belts. We bought two of them, coupled them together, and attached them to the back of Roger’s bike. Then we rode down again to get the XR. I hopped onto it and put my right hand onto the handlebar grip, while my left hand was grabbing the end of the belt. I did not know if this was going to work, and at first, I lost the belt a few times, when Roger was starting off. But a few attempts later I was able to stabilize the bike with one hand while holding the belt with the other. Roger did a good job in slowly starting off and keeping a speed of about 20 km/h, so we were able to make it to the top.

Happy that our plan had worked out, we detached the belt and I rolled down the other side of the mountain until I saw William with the support van. We made it to the hotel and arrived just on time for dinner, where the rest of the group was already waiting for us. The day ended with three very exhausted tour guides, but a notedly unique Transfăgărășan experience.

Björn
Thursday, April 8, 2021 at 14:24
Thanks Perry, it was my
pleasure to ride with you!
Reply
Facebook Twitter Google+