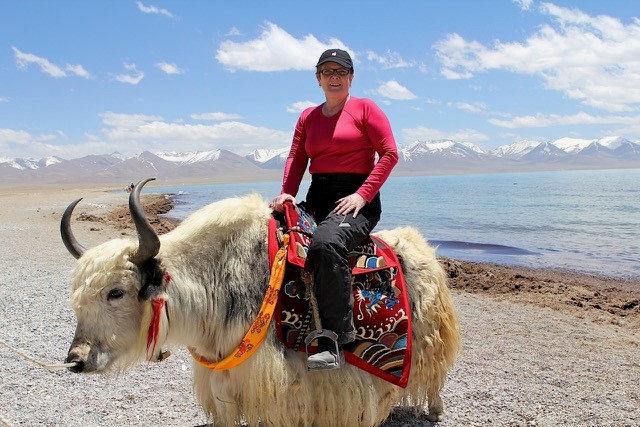 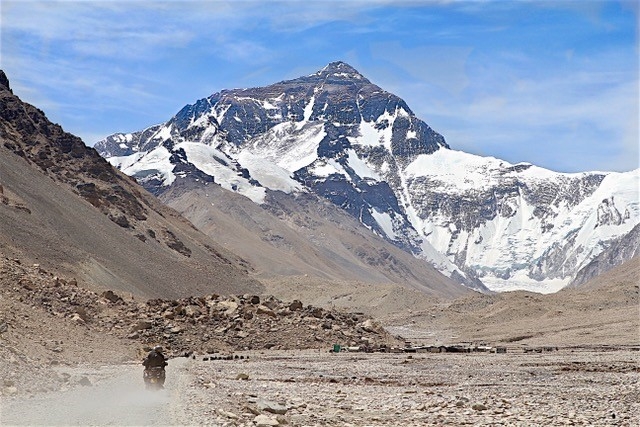 What can I say? So much appreciation for tour guide Thomas for encouraging us to take this tour. It was a once in a lifetime adventure!

Only 8 participants but with a support crew of 3 guides (German, Chinese and Tibetan) and a support truck of 3 people which included a mechanic, our tour commenced in chaotic Lhasa at 3,656 metres. Well, that is after Carol was placed on an intravenous drip for altitude sickness after we had visited the Potala Palace 300 metres above the valley floor.  This did not bode well for travelling at altitudes of over 5,000 metres however the prescribed pills did the trick. A group of round eyes riding large bikes certainly made us the centre of attention, wherever we stopped.

The Tibetan people are very welcoming and friendly, and it was not uncommon for young women to ask for photos with the men.  Aloy from Brasil was the most popular with his beard.  With my bald head, I was probably the least popular.

Life is simple and people have a happy disposition.  We encountered a group of women washing clothes by a stream and we stopped to listen to their singing.  Remarkable! Even at Rongphu Monastery – Base Camp 1, the monks needed no invitation to climb all over the bikes, pointing and waving while communicating in their own language.  It was such a delight to see them so uninhibited and having so much fun.

The strict control of our movements by heavily armed guards was intimidating to say the least but we were in great hands with our 3 guides.  We were also only permitted to move as a group and only then when accompanied by Nyima, our Tibetan guide. The only thing more restricted was our breathing at such high altitudes.

Yak poo is “the goods” … and is used for many things.

They are an integral part of the Tibetan culture and serve as a tractor, steaks, skins for leather, fuel for cooking and heating and believe it or not for washing dishes … oh yes!

Yak Poo is stacked everywhere and allowed to dry in the sun - on fences around houses, on rooftops, and stored in piles in the open wherever there was sufficient space to do so.  And there was no smell that we were aware of.

Qomolangma, Mount Everest or “Holy Mother”.   Whatever you call this mountain at 8,848 metres (29,029 ft) above sea level – you will be in awe of her majesty.  Qomolangma was the highlight of our tour and turned into a team challenge making it even more special.

The team challenge reference arises due to some unfortunate breakdowns on this crucial day.  But there was no way that the group was going to allow any member not to make it to Base Camp.  Solo riders handed over their bikes, pillions swapped bikes.  Even our guide became a pillion.  And we celebrated together!

Approx. 120 km from the town of Tingri, the trip consists of 100 km of dirt and 113 hairpin turns, through Rongphu Monastery and then on to Base Camp 2 known as Tourist Base Camp – a number of tents serving food, a post office where you can have your passport stamped and this is as far as you can travel on a bike. Into a minibus bound for Base Camp 3 – Climbers Camp - which is as close to the mountain as you can get, without actually climbing it!

A visit to the North Base Camp currently requires a permit from the Chinese government, in addition to the permit required to visit Tibet itself.

Yaks are everywhere and they are slow and predictable but less than predictable are the horses, cattle, donkeys, sheep, goats, dogs and little black pigs ... which our guide Rick said: "are quite delicious".

Nothing stopped the team from having a beer which was the first thing we did on arrival at every hotel.

Traffic rules are for tourists … but only a guideline for locals. Watch out for Land Cruisers with a red letter on their number plate. They overtake trucks and cars with horn blaring and if you see one heading towards you on your side of the road – get off!

There are monasteries in every town and generally prayer bells outside which are just begging to be touched.

Even we as tourists were drawn to them and it is quite relaxing to walk along turning them.

According to the Tibetan Buddhist tradition based on the lineage texts regarding prayer wheels, spinning such a wheel will have much the same meritorious effect as orally reciting the prayers.  Beds are rock hard - get over it! You will be really tired at the end of each day anyway, so a bed is always welcome.

Transport modes will be different & interesting. Construction quality is interesting – tiles may be falling off walls, electricity can fail at any time and the plumbing may or may not work – look the other way! Everyone has a job - even if it means sweeping the roads.

But with all of that, what an experience!  I can’t recommend it highly enough.