best book there is, part 12: Ode to the Alps 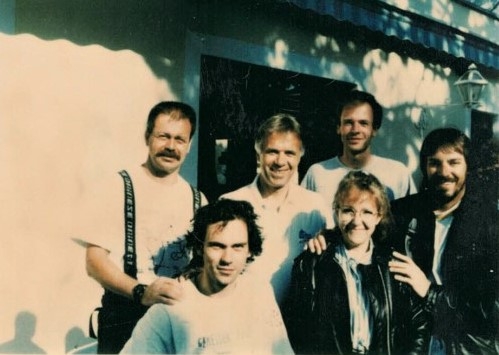 It was the summer of nineteen hundred and ninety-five

A group of bikers from America sought a new place to ride.

So we went to the Alps for an Edelweiss tour

Mountain roads, new friends and great food was the lure.

We just hoped that we wouldn’t hear the motorcycles go crunch.

There was Joe and Jim who went along for a lark

And their good friend August who found a new way to park.

Then there was Mike who’s feelings you can’t hurt

But if you think that you did, just buy him dessert.

Now it’s obvious to all that he rides for Team Squid.

There was Mike and Tony with their friend Phil,

Who looked at Grossglockner and said, “Damn, that’s a big hill!”

Joining the ride was Dick, the elder of the Tour

Who’s the youngest at heart, of what we’re all sure.

Joyce and Jerry came and brought a Harley,

He sure liked cigars and a certain beverage made with barley.

There was Joe and Cathy, who’ve already seen the peaks

So Cathy told Joe, “I must buy antiques.”

There was Chuck and Annette, along on their honeymoon,

We learned Chuck rode smooth so they’d go to the next room.

Also along was Ron and Donna

Who’d look at the passes and say, “I’m not sure if I wanna!”

I hung mostly with Ed, I’m not really sure why

Must be because he’s a laid-back kinda guy.

Yet one more Ed was there and so was Mitch

They’d weave through the Alps and say, “That pass was a bitch!”

Fitting in with the pack was Carol and Jim

Who would glide through the turns as if on a whim.

Also along was Dolores and Charlie,

We took a vote and think you’d look better on a Harley.

Mixing it up with the bunch was Joe and Ann

Who can sail through the mud like the best of them can.

For twenty-five years she’s come along on my ride.

Some say she’s a saint, and that’s quite a feat

For she saved the whole world from a looney named Pete.

And that’s who we are, it’s sad to see it end

But I can’t help wondering what’s around the next bend.

Our guides for this trip number just three

And from what I have seen they’re the best that can be.

First, there is Jurgen, so tall and so slick

Then there’s „You!“ Stephan, so suave and so cool

Who warns us of danger for that is his role.

I call him “Mad Markus” but that’s not an insult

It’s really a compliment and respect is the result.

The ride is now over and soon we must part

But the memories we’ll keep in our minds and our hearts.

Maybe we’ll meet, who knows where or just when

For we’re not sure where we’re going

Heck, we’re not sure where we’ve been

So I say from my heart, for I have nothing to hide

I thank each and all, it’s been an incredible ride.

best book there is, part 12: Ode to the Alps