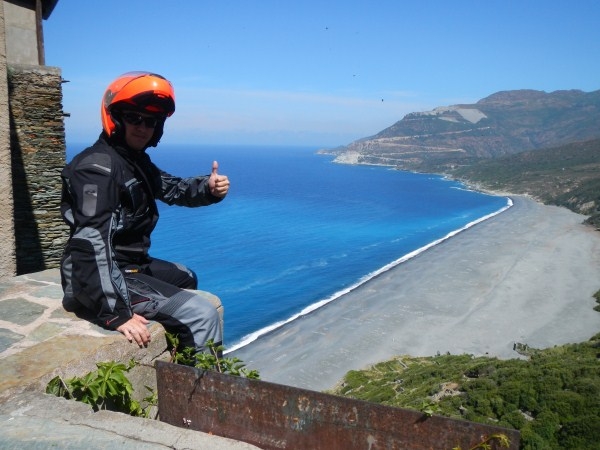 We have reached our destination - Bologna! It is hard to believe that we have been on the road for 11 days - time flew by!Our last day was another twisty ride through the mountains, this time the Appeninne. Once we had crossed this long mountain range, we reached the Ferrari Museum in Maranello. The cars were spectacular - but nobody was ready to trade in his Ducati! 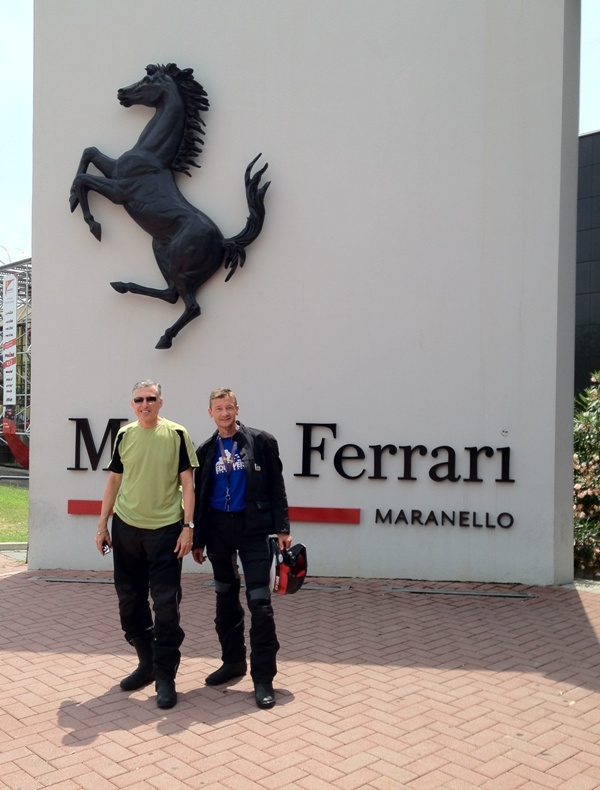 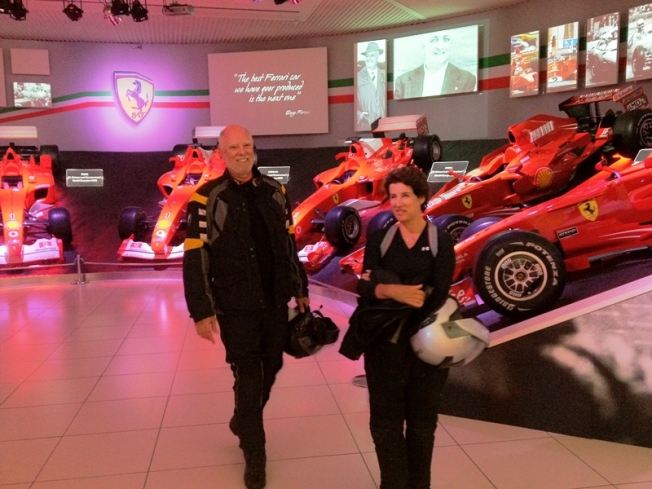 Orlando, Tom and Julio enjoy the last hours in Bastia

After a quiet and calm night on the ferry, we are back in Italy. Before I talk about today, some impressions from yesterdays ride through the north of Corsica: 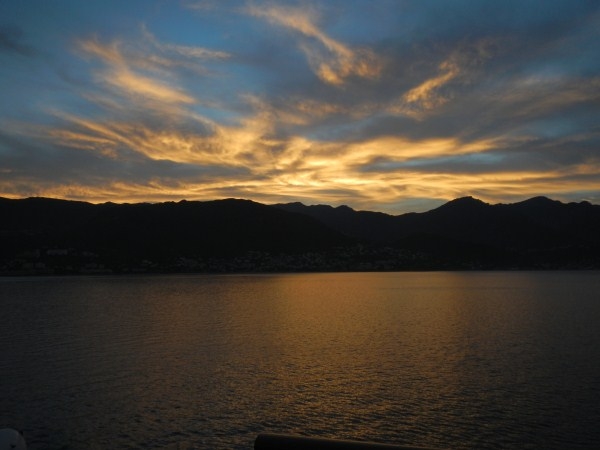 Italy greeted us with some things that we hadn't seen for a while: clouds and traffic! But the clouds were just morning fog that lifted soon, and the traffic disappeared as soon as we left the coastal road and climbed into Liguria's mountains. Here we were greeted with the unparalleled Italian friendliness. A very nice Italian couple was more than happy to meet the bikers from Brasil, America and Germany and shared lots of stories - and some great fruit! After a few more miles, the world changed once again: from the mountains we descended to Portofino - a postcard-perfect village hidden in a bay on the Mediterranean Sea. Hidden might be the wrong word, because quite a few more tourists have found the place! The scenery is nevertheless beautiful! 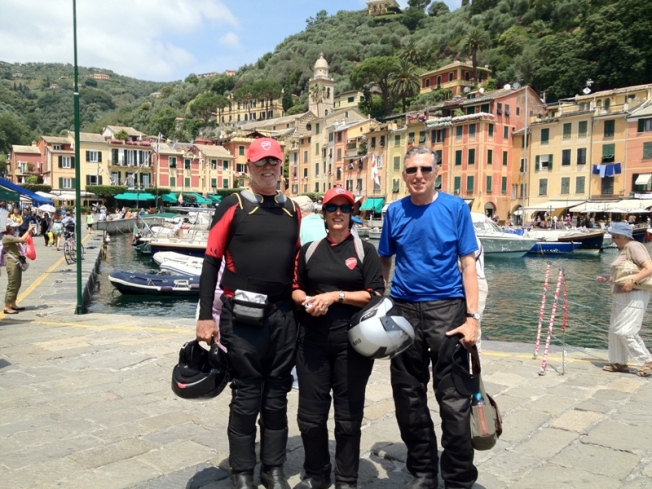 After a great lunch we continued along the coast towards the famous Cinqueterre region, where we are spending the night. Tomorrow we will turn our bikes back towards their home - Bologna! Dinner with a view!

We have definitely deserved our second rest day on this tour of twisties! After riding for more than a week now, nobody had any objections against a day off the bike. Well - two of us just couldn't get enough and used the coolness of the morning for a little ride on Corsican backroads, high above Calvi's endless beach! 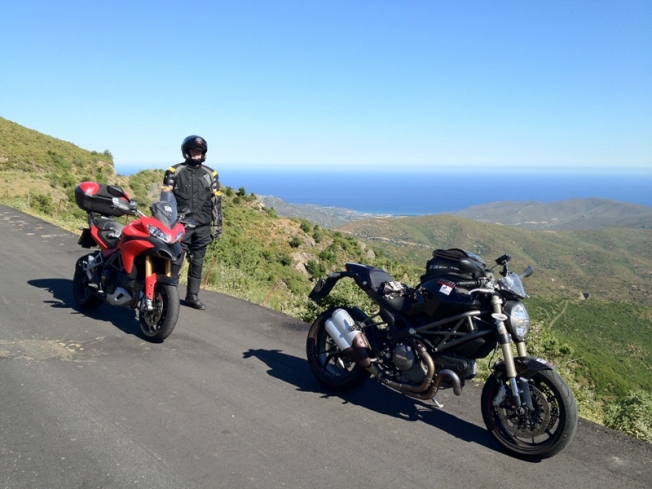 The Ducs high above Corsica's beaches

But no matter what everybody did today - ride, relax, swim or tan - in the evening we were all rewarded with a great dinner! Angela and Orlando in Calvi

Tomorrow is already our ninth riding day - we have to leave this marvellous Mediterranean island again. We will ride to Bastia, where the ferry is waiting for us. After a night on the boat, we will arrive on the Italian mainland Monday morning!

We have reached Calvi, one of Corsica's favourite vacation destinations. Just when we had thought that it can't get any more beautiful, Corsica had another surprise for us: the Calanche. This area of red granite rocks is an unbelievable mixture of colors, the fotos don't show the real beauty of this area. 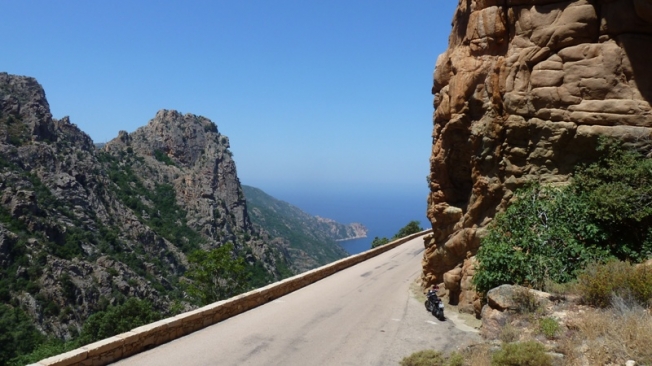 After a very relaxed lunch with specialties from Corsica, we continued our rollercoaster ride until we reached our hotel in Calvi, where we will spend the  next two nights. Tomorrow is a rest day - plenty of options... the beach is very tempting, the Zitadelle is worth a visit and of course there are lots of great roads to explore! No, the background is not a wallpaper...

What a day! As usual, the blue sky greeted us in the morning. We started our journey through Corsica with a ride up the eastern coast. Beautiful beaches and small ports lined the way - finally we had to stop for a Café au Lait in one of the little cafés, the temptation was too big... Three Ducatisti in the port of Solenzara

Here the relaxed riding ended. Countless turns led us up into the Corsican mountains - we finally reached an elevation of 4000 ft., not bad for an island in the Mediterranean. The surrounding mountains reach up to 6000ft. - an unbelievable scenery! The rollercoaster ride continued for another two hours, but finally the western shore and Ajaccio, Corsica's largest city, were in sight! The summit and one of the guides

The night will be spent in Ajaccio, across the street from Napoleon's birth place!

Bonjour Corsica! After four days on the very motorcycle-friendly island Sardegna, Corsica will be our playground for a while. Bonifacio, situated high above the Mediterranean Sea, is a perfect place to start the ride. About 1000 turns later, we have reached the western shores of this marvellous island. The ride through Sardegnas Gennargentu mountains can only be described with one word: breathtaking! One thought that went through the riders mind: "It's like the Tail of the Dragon - again and again and again!". The World Heritage Nuraghe Su Nuraxi gave us the chance to relax a little, before we continued to the coast again. Kaan and Tom in the Gennargentu mountains The rest day in a beautiful hotel on the ocean just outside of Alghero was very welcome, as the weather is still very warm with not a cloud in the sky.

Some of us went riding, some went sight-seeing in Alghero - and eventually everybody was seen in the cool waters of the Mediterranean! Angela and Orlando in front of Alghero

The first Edelweiss Corsica-Sardegna tour is on its way. We left Bologna yesterday - after the mandatory visit to the Ducati Outlet Store and a guided tour through the museum. Every motorcycle here is a piece of art - just like the Monsters and Multistradas that were lined up for the Ducati tour through Southern Europe. A long time ago, Ducatis were silver...

Shortly after leaving Bologna, the route lead us into Tuscany, where we had the chance to visit two of its famous cities: Lucca and Pisa. 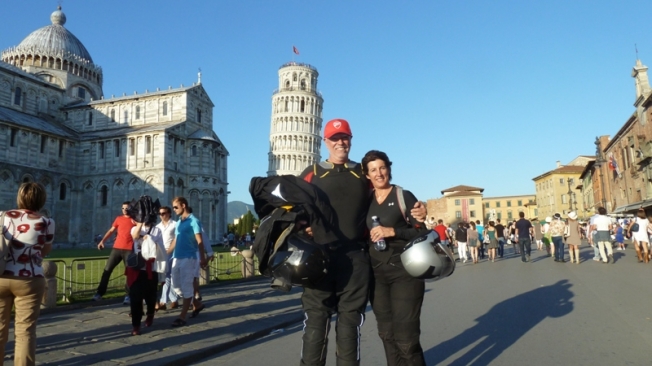 Angela and Orlando - and a very famous tower

After a calm night on the huge ferry we reached the beautiful island of Sardegna. Blue sky and a magnificent scenery provided a promising start to our exploration of the island. After an initial cappuccino we were ready to tackle the twisty mountain roads on the eastern shore. 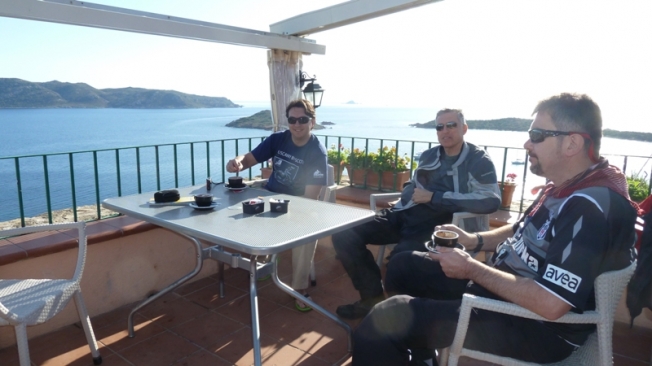 Cappuccino with a view 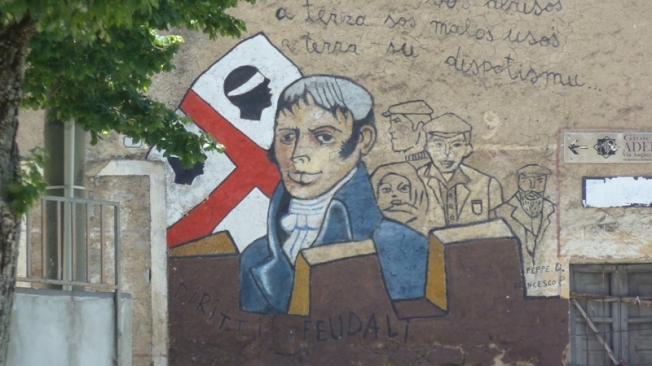 Jens
Sunday, July 15, 2012 at 17:31
Hi Thomas, I just recognized you on the pictures! Incredible - long time no see....
Hello from Cracowia - Poland!
Jens(Edelweiss) at the moment on a Special Tour "Kings and Castles"
(with a group from Guatemala)
Reply

tony ridgway
Wednesday, June 27, 2012 at 02:58
Hi Marko
looks like a fantastic tour, I was considering taking this trip or the one to Sicily before deciding to take on the Alps in July..... I hope I have made the right choice!
Look forward to catching up with you in Munich in and around the 26th cheers
Tony ( and Wayne) from Aus!
Reply

Kaan Ulkan
Monday, June 25, 2012 at 12:39
I am one of the participants of this tour
It is a great tour, just couple of fresh hints;
Get Multistrada instead of Monster
The hotel in Ajaccio was so noisy, could not sleep at all that night
Corsica is a great plave to visit,just stay away from the mainroads , they are faster but very boring
Wear a zip off pants so that you can enjoy walking some of the stop overs without sweating
Reply