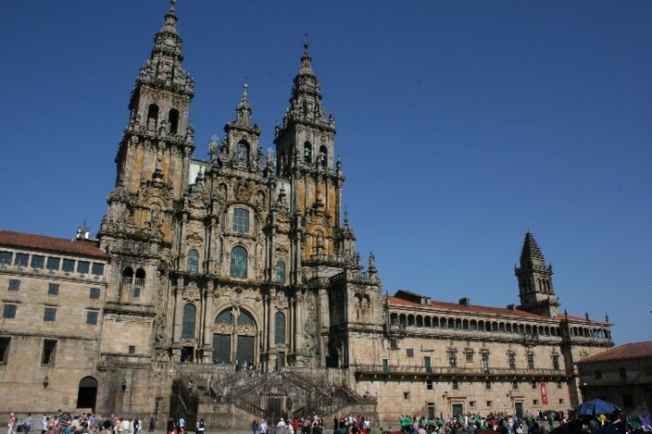 Way of St. James 2011: Motorcycling where others walk on foot

An exceptional tour in northern Spain in 2011: motorcycling along the Pilgrim's Way to Santiago de Compostela, then on to Porto and through the Picos back to Madrid. A rather European group - Americans were not yet familiar with the mysticism of the Way of St. James.

On this tour, too, there were picnics. At a very beautiful place, the motorcycles were neatly lined up. I was last in the line - still sitting on the motorcycle, when Tom, our Canadian, placed himself beside it. Before he could get off his bike, he lost his balance and leaned with his full weight to the right against my motorcycle. I was standing pretty firm, but to hold 2 motorcycles and another rider - that was pretty tough. "Don't fall over, or the whole line of bikes will fall over" it rang through me. Endless minutes passed before Tom had found his footing again - the rest of the group hadn't noticed anything, because they were already busy with the picnic! A dented suitcase - that was all the damage - lucky. We had just avoided a major interruption - but it would have been an interesting test to see how many spare parts Edelweiss actually had in the van.

After each riding day through beautiful countryside, the reward was waiting in the evening: Off to the old town and order beer in the shade of the unique cathedrals. Tapas were included and with every order of beer new Tapas were served. Who wants to have dinner afterwards?

Even if the sun wasn't always shining, there were some strange creatures standing at the roadside, which also put the Edelweiss CEO in ecstasy. Rainer accompanied us at the beginning of the trip and in the evening, he also donated a bottle of wine or two. Anyway, we brought him safely to Santiago de Compostela, from where he had to fly home again.

We arrived in Santiago and immediately went to the old town to visit this incredibly beautiful cathedral. On the last kilometers to Santiago we had already accompanied flocks of pilgrims, who walked along the road with a fixed gaze and one after the other. At the cathedral we met these pilgrims again, who had set up camp on the forecourt. We used the "rest day" for an excursion to the sea and tested the water temperature hands-on, or better toes-in. Here the pilgrimage ends - but our motorcycle tour started into its next phase - this time without pilgrims. Porto was waiting with its port wine cellars and a wine tasting in the great old town. Great Alpine passes in the Picos, but with much less traffic than in the Alps, so the GS really got going.

Northern Spain and the Camino de Santiago by motorcycle have left unique experiences and impressions on all of us.