Sunday - arrival day! Almost everybody made to Johannesburg in time, excited and looking forward to two weeks of riding, cultural differences, beautifull landscapes and some adventure.

The first day was easy going, cruising through a country side which could be in the US midwest. Wheat fields, cattle farms and coal mines accompanied our way to Watervall Boven. 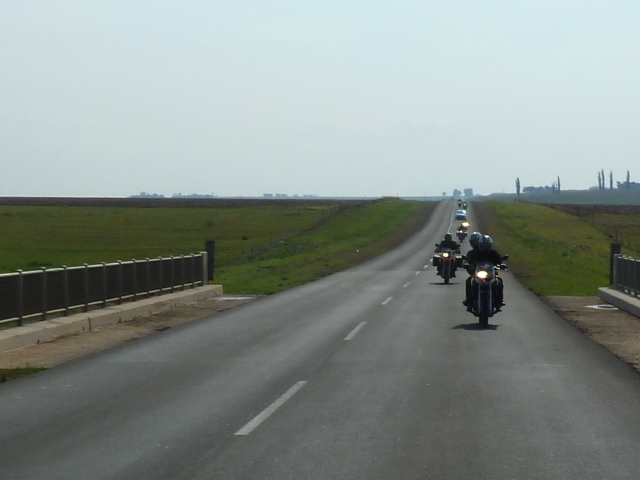 Day two we didn't see very much! Climbing Long Tom Pass we hit fog - not a thing to see. After the highest point the sky cleared up and we got some good riding. But after Pilgrims Rest we were back to zero visibility, God's Window had it's curtain closed. 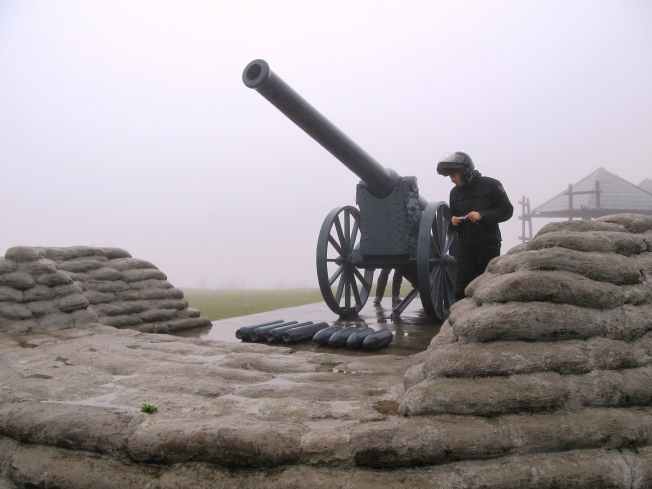 Rest day! But no sleeping in, we were picked up at 5:30! The animals at Kruger Park were waiting for us. Lions and a leopard were relaxing in the far distance, others, like the elephant prefered to stop at the road side and to pose for pictures. A part of the group in Kruger National Park 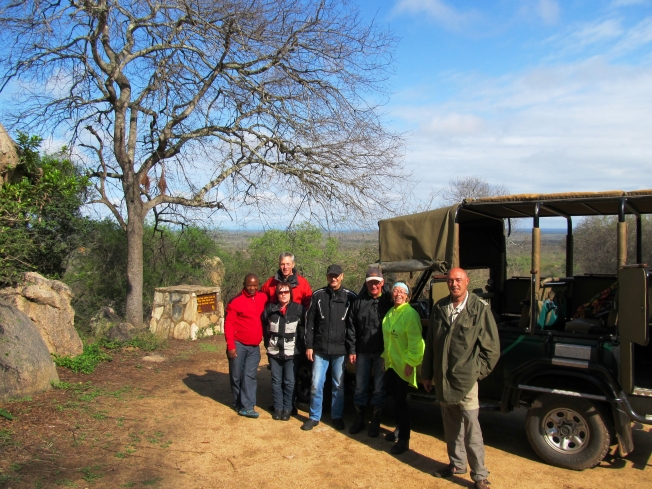 Bethuel and the support van 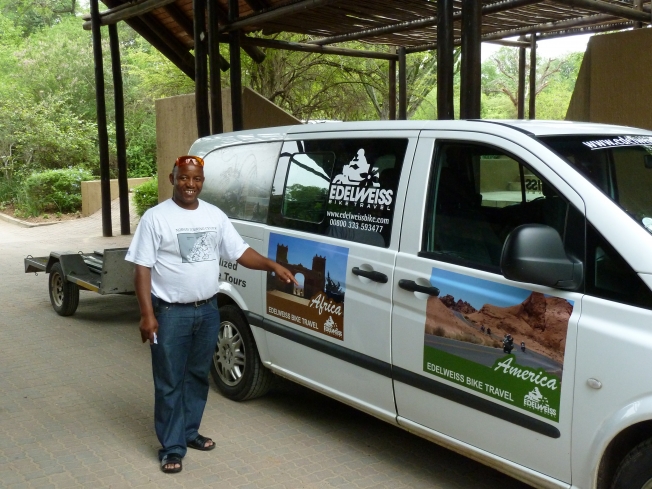 After the adventure Kruger National Park we continued our trip going South. The border crossing into Swaziland took an eternity - the had a new form to hand out, but figured out after a while, that motorcyclists don't need that one! Typical Swaziland! But finally we got to ride in that beautiful country. Kids walking home from school were waving at us, some of them dancing to celebrate the bypassing visitors on their machines. The timing was perfect that day - like lonesome cowboys we were riding towards sunset.

Some delicious fruits along the road 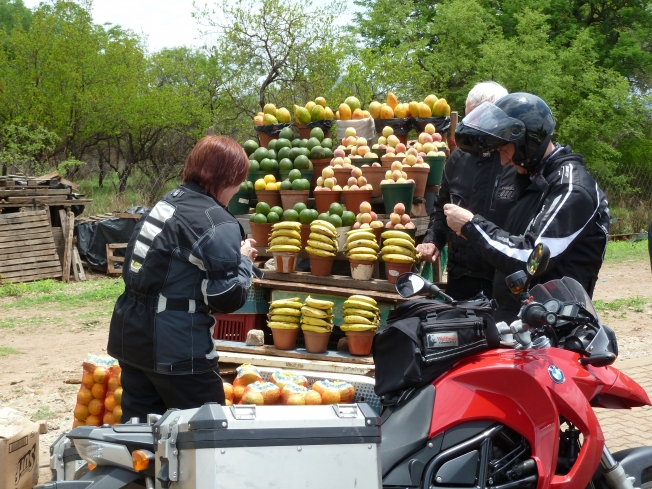 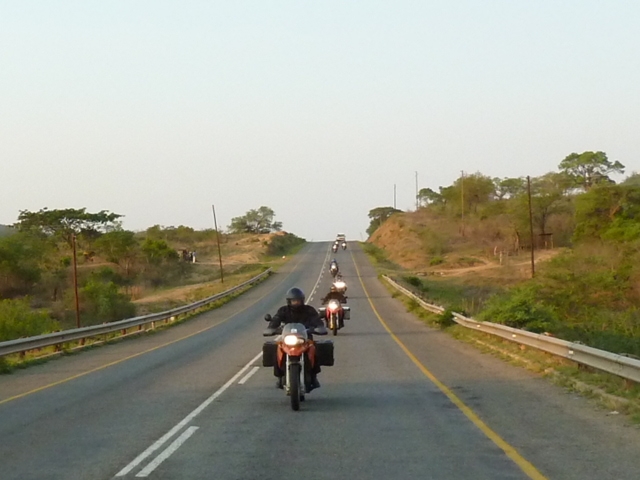 The following day brought us back into South Africa and we ended up in Swaziland. It seems to be a place for tourists, but the Zulus are proud of their heritage and they explained proudly their tradition and dances.

The Zulu warriors showed us their dances Today was an easy one! after two hours we got to Salt Rock where Bethuel, our support van driver was awaiting us with a delicious picknick at the beach. Bodysurfing in the big surf, napping and relaxing at the beach, having a "braai" (SA version of barbecue) - what more would you need to have a perfect Saturday!

After a short ride through Valley of Thousand Hills we arrived in Wartburg. 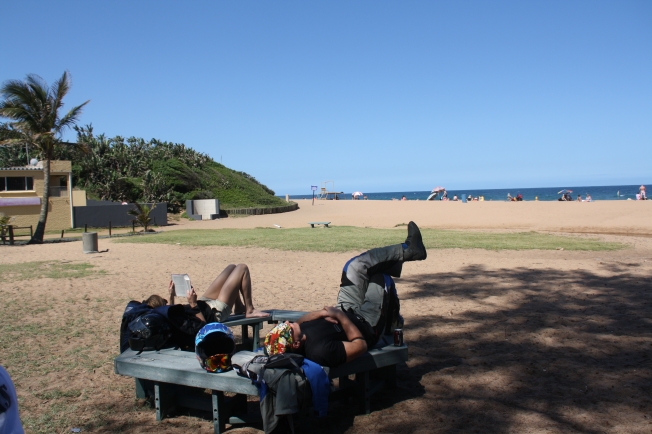 Sunday - todays route was alittle more than a Sunday leisure ride. 440 kilometres took us from Wartburg to the main capital ofthe Transkei. Roads, as perfect as a race track led us close to the Drakensberg Mountains, which are standing up like a wall in the distance. Together with the clouds they created a picturesque postcard we were riding through. Leaving Umtata we rolled through the Transkei towards East London. Beautiful landsape, traditional houses and friendly locals wavind at us while we cruised by. About 100 kilometres west of East London we reached Mpekweni, a place in the middle of nowhere, but perfectly located. Our hotel directly at the beach Leavind a wonderful beach we headed for Port Elizabeth. On the way some of us learned that pineapples are not growing on trees. Well, a lot happened after the last update. Internet is not yet developed too much in South Africa. But anyway, our tour was going on and leaving Port Elizabeth we headed for an extra portion adrenalin for three from our group. Enrico, Nocolo and Brian decided to get an extra cick. Face Adrenalin - so the slogan of the company running the business at the world record bungy bridge - 216 meters.

We went all the way to Oudtshoorn, the ostrich capital, that day. 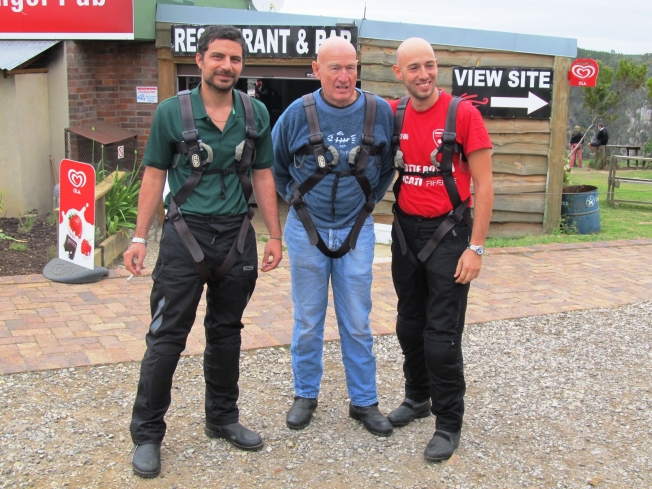 Next morning there were choices to make, either going on Swartberg Pass - a national moument and dirt road - or to visit an ostrich farm and learn about them. In the afternoon we followed Route 62 with a stop at Ronnie's Sex Shop all the way to Montague, where a wine tasting was awaiting us. The last stretch to Cape Town brought us another good riding day. Leaving the Little Karoo, cruising through winyards, we made our way to Hermanus, where at this time of the year whales are right offshore nursing their calves. After watching them for a while we had to leave for Cape Town to get in time on the Howard Davis, a two mast sailboat, ready to take us out for a sun set cruise. Last stage on our trip - the ride to the Cape of Good Hope. The most southwestern point of Africa showed his best side - a little bit windy, but suny day. Crawling along with saturday traffic we made our way around the Cape Peninsula.

At the Cape Point Sometimes you have to say farwell, but you get the feeling that you might come back to a country - South Africa is one of them!