The Sicily-Rome Tour is over. But on the next day Jeff and I went on the Guided City Tour in Rome. Perfect weather and lot of surprises waited for us

And... as the City tour was at the end of the motorcycling tour so we had not to be at 4 pm at the welcome briefing - we had time!!!! 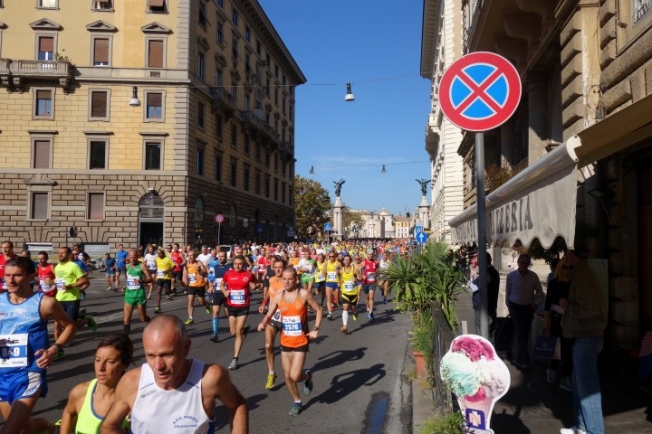 we run into the Rome marathon. All roads were blocked, no busses but also no traffic in the streets. 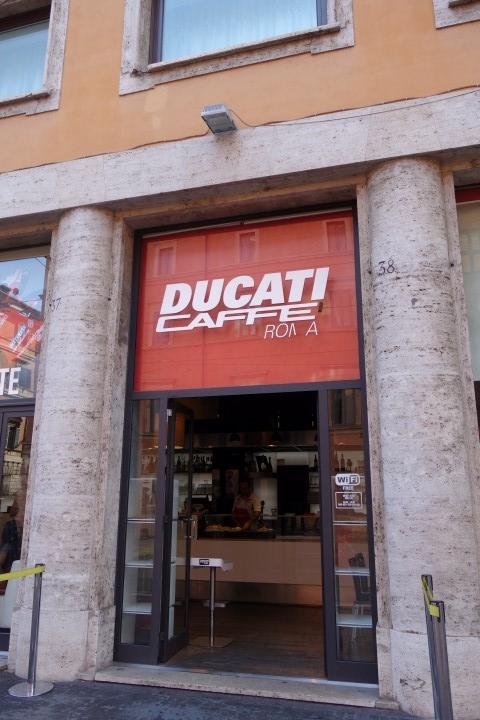 First stop was a coffee at the Ducati cafe 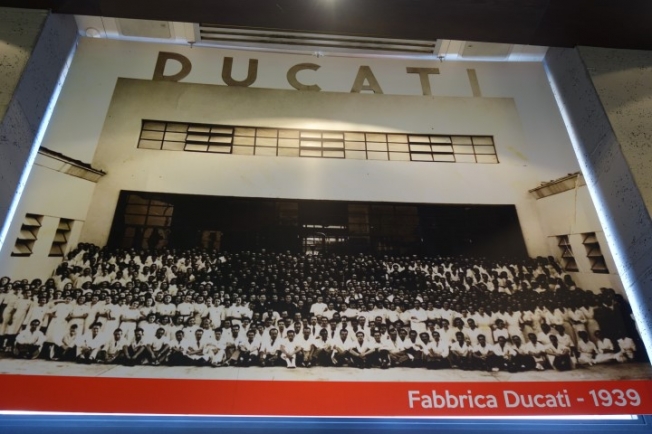 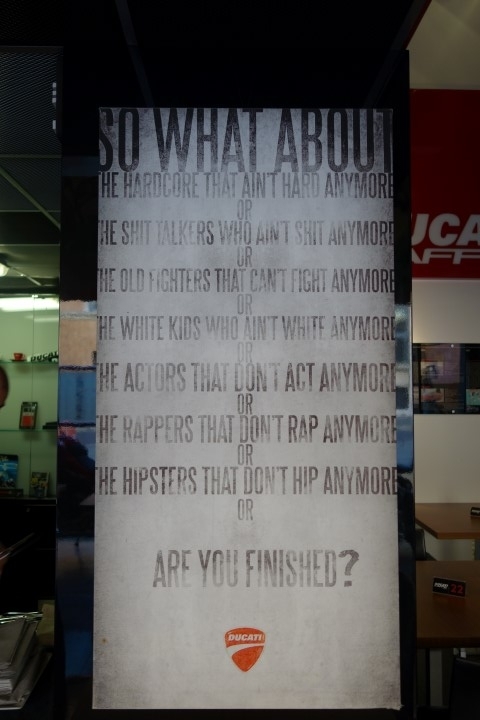 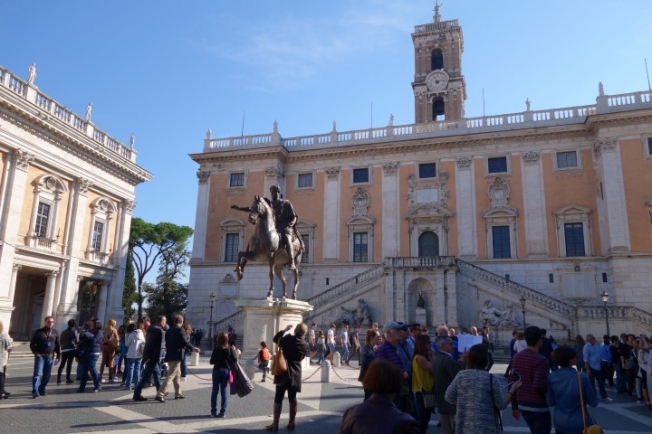 Piazza del Campidoglio - the surrounding Palazzi created by Renaissance artist Michelangelo Buonarotti in 1536-1546. It is now the seat of the City government. 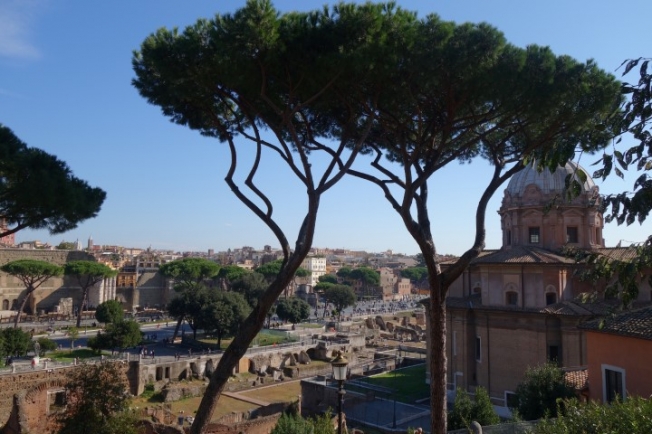 from there you overlook the Forum Romanum - a rectangular forum surrounded y the ruins of several important ancient goverrnment buildings. It was for centuries the center of Roman public life: the site of triumphal processions and elections, the venue for public speeches, criminal trials, gladiatorial matches and the nucleus of commercial affairs. 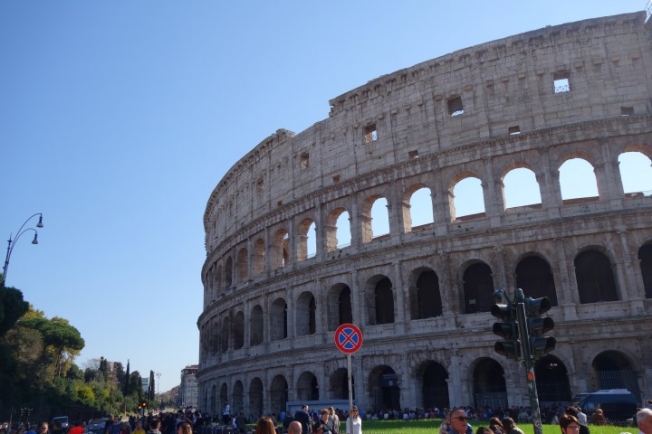 We walked along the Via dei Fori Imperiali. This avenue was built by order fo Fascist dictator Mussolini in 1924.Its construction entailed the systematic demolition of over 40.000 square yards of one of the most densely populated areas of Rome. The Via dei Fori Imperiali completely changed the landscape and character of the heart of Rome. and sliced the Forum area in two pieces. 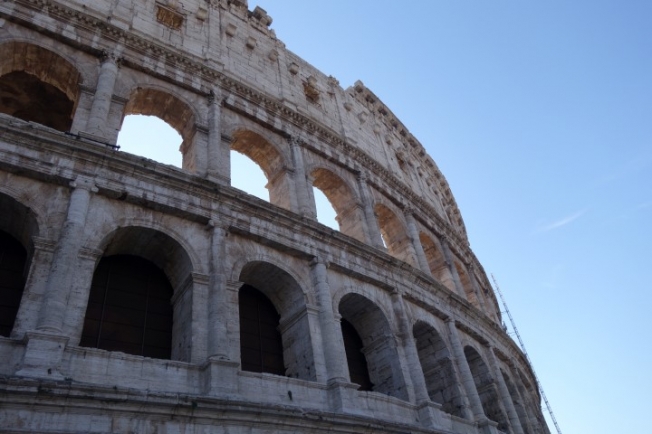 At the end of Via dei Fori Imperiali - the Colosseum.

the largest Amphitheatre in the Roman Empire, the greates works on Roman architecture and engineering, largest amphitheatre in the world. 22 BC , inaugurated in a 100 day long celebration, film set for the "Gladiatior", 80 entrances, 4 for the upper social levels. The Colosseum seated 50.000 spectators, it was the blue print for all our modern stadiums. The spectators could leave the building in 15 minutes. 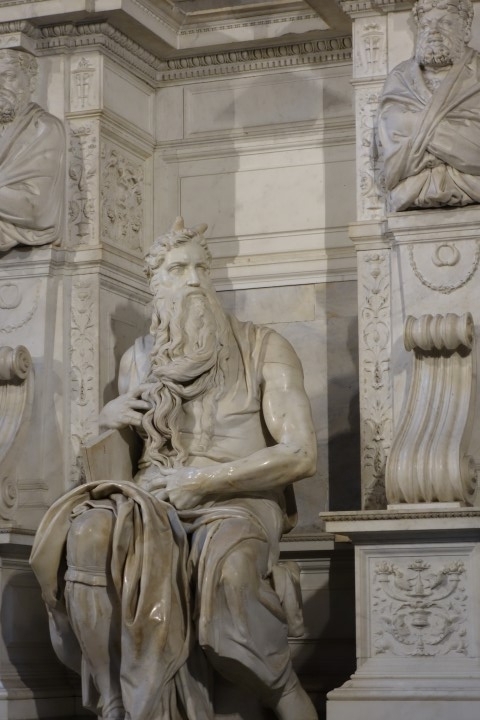 we did a detour to San Pietro in Vincoli. The original Moses of Michelangelo is placed there -  wonderful. 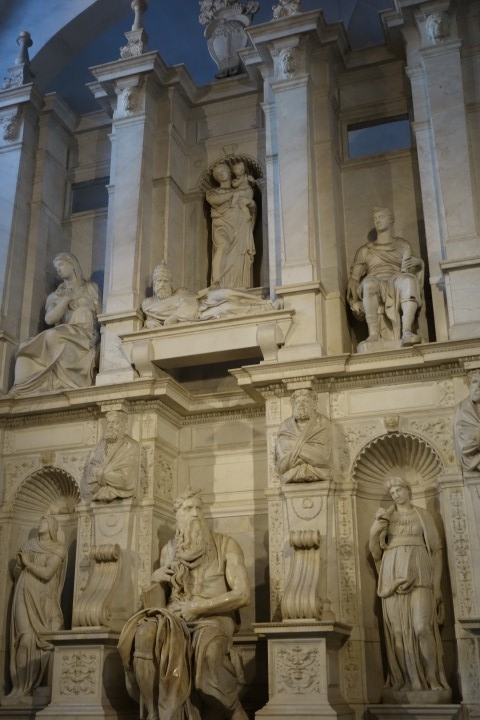 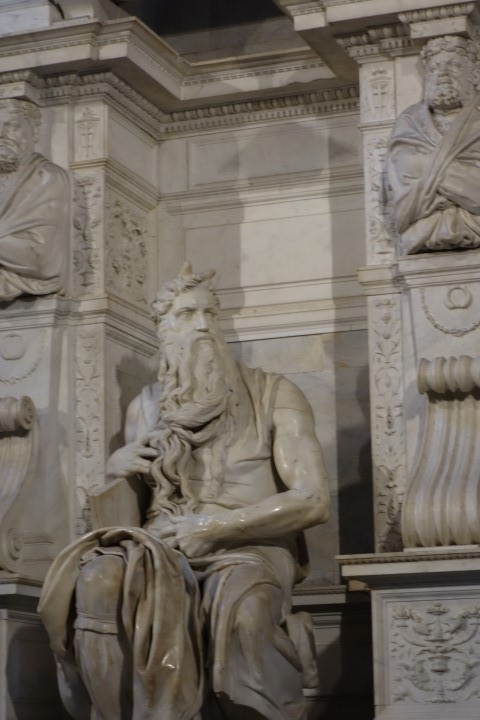 Seated in a serious attitude, he rests with one arm on the tables, and with the other holds his long glossy beard, the hairs, so difficult to render in sculpture, being so soft and downy that it seems as if the iron chisel must have become a brush. The beautiful face, like that of a saint and mighty prince, seems as one regards it to need the veil to cover it, so splendid and shining does it appear, and so well has the artist presented in the marble the divinity with which God had endowed that holy countenance. The draperies fall in graceful folds, the muscles of the arms and bones of the hands are of such beauty and perfection, as are the legs and knees, the feet being adorned with excellent shoes. It`s touching! 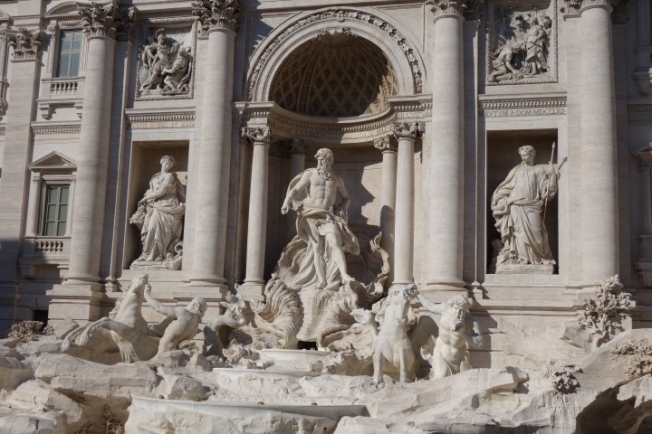 Largest Baroque fountain and one of the most famous fountains in the world.The backdrop of the fountain is Palazzo Poli.

Largest Baroque fountain and one of the most famous fountains in the world.

In January 2013, it was announced that the Italian fashion company Fendi would sponsor a 20-month, 2.2-million-euro restoration of the fountain; it will be the most thorough restoration in the fountain's history

Jeff threw a coin in - so for sure he will come back to Rome. 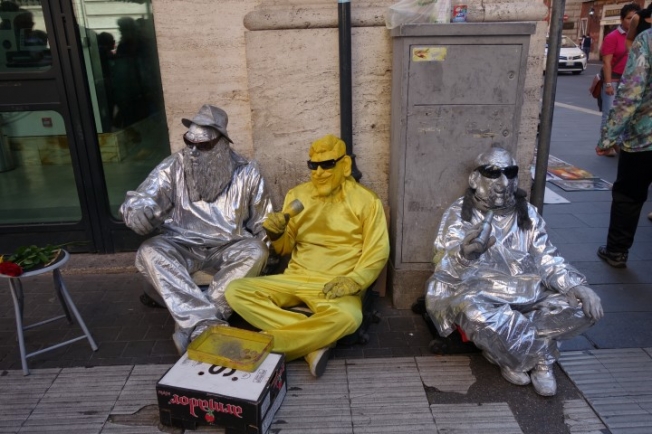 these guys were funny 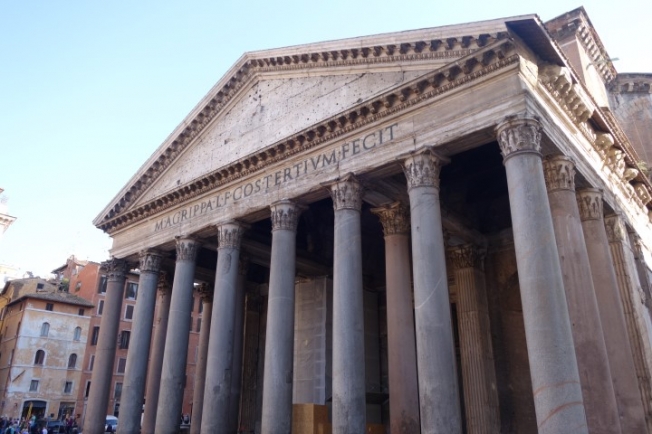 Pantheon - one of the best preserved of all Roman buildings, 2000 years old, still the world largest unreinforced concrete dome. Inside the Pantheon, amongst others - the tomb of Raphael.

Be had another beautiful lunch just in front of the Pantheon. 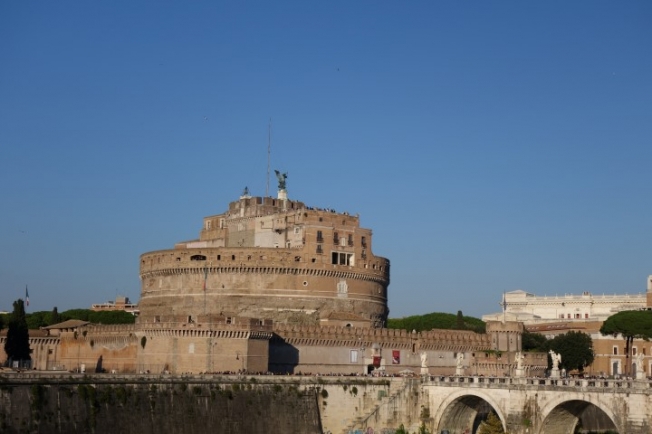 commissioned by the Roman Emmperor Hadrian as a mausoleum for himself and his family. Later used by the Popes as a fortress and castle and is now a museum. 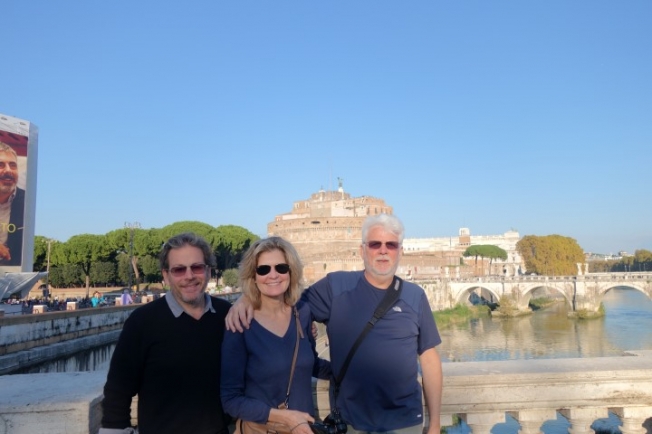 Saint Peter - no lines!!!! all the tourist have been at the sunday morning Angelus pray of the pope. Normally there is 1 km long line! Jeff was easy and so I talked him in to go in and up the dome

Vatican City is the smallest inernationally recognized independent state in the world by both area and population. Saint Peter`s Square is a massive platza located directly in front of the Basilica. At the center of the square is a 4000 years old Egyptian obelisk, erected at the current site in 1568. Gian Lorenzo Bernini designed the square almost 100 years later. 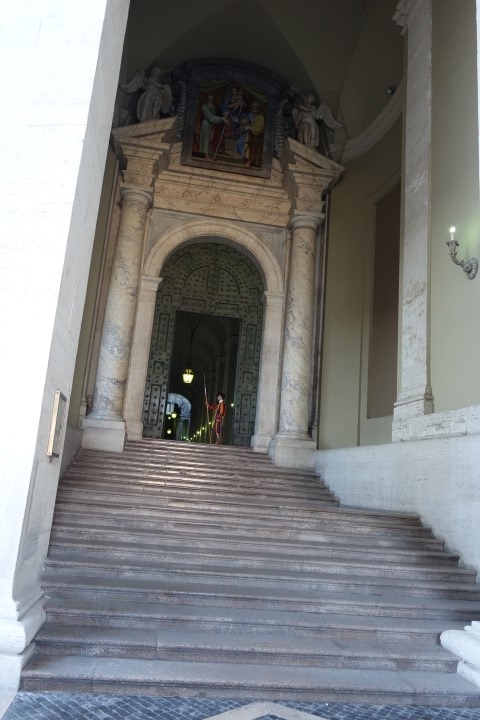 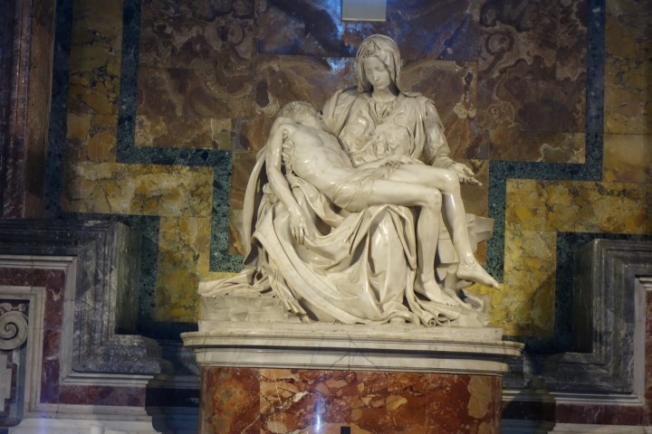 The Pieta of Michelangelo - we were both overwhelmed 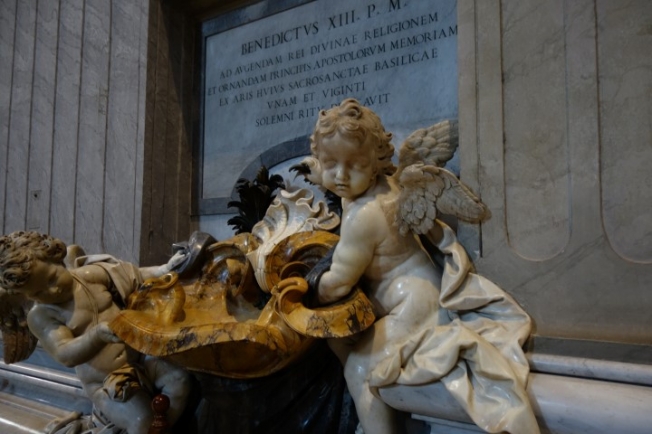 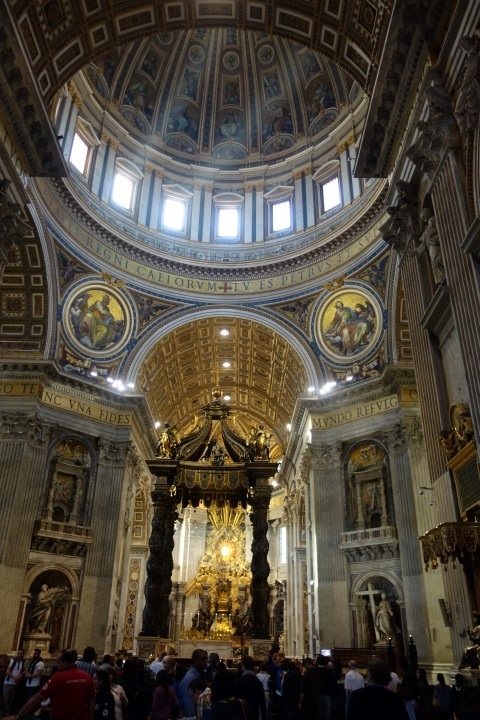 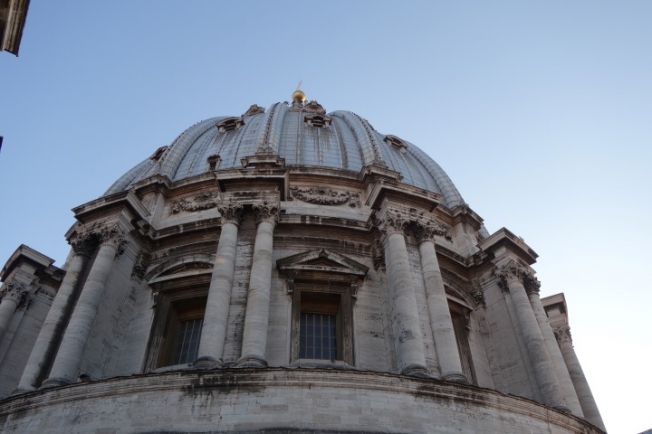 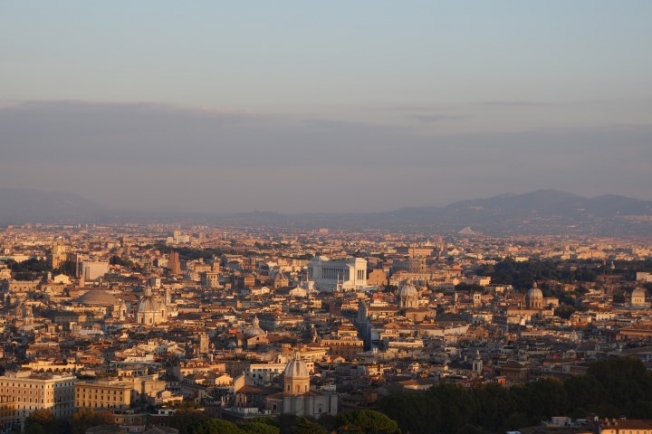 sunset  high above Rome - you can see the monument of Vittorio Emanuelle, the Colosseum and even the Pantheon Thanks Jeff for a wonderful day - I hope you enjoyed it.

we met the rest of the group, who extended there motorcycle tour in Rome, for dinner at Campo dei Fiori. The slow food restaurant "Grappolo d`Oro" was our pick for a last delicious meal in Rome.

Thank you all - have a safe travel and keep in touch.

Eve
Monday, December 28, 2015 at 06:16
What a nice tour. I used to enjoy traveling without jet lag with my jet lag prevention, jetLAGFX http://www.jetlagfx.com/. Thank you for sharing.
Reply