Best book there is! 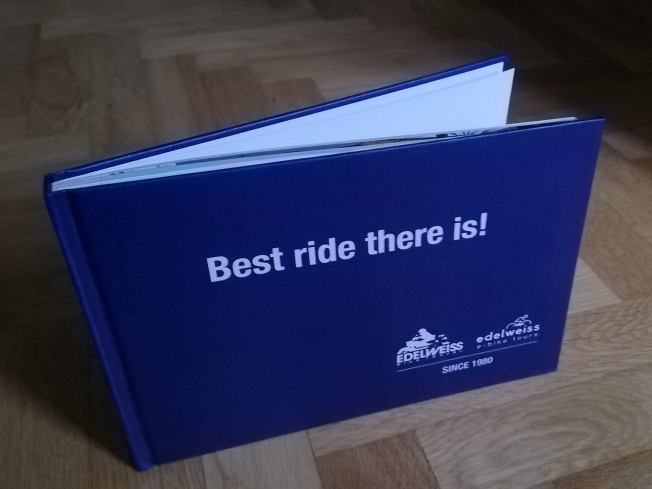 We collected over 60 contributions from all over the world for our 40-year book, from customers, employees, and tour guides, and also from journalists. Unfortunately, it was impossible for us to include all of them, so some of them remained unpublished. We now pay tribute to them here in our blog and present them in loose succession for your winter reading pleasure. 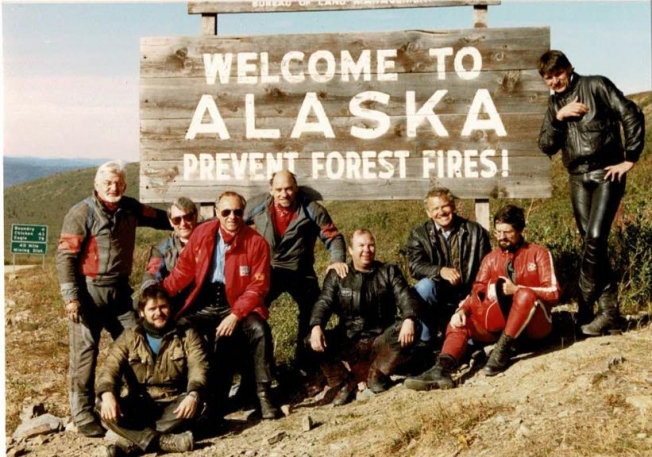 I remember it very well. When we were primary school children, we had a plastic school bench cover, which we had to put on our desks as table protectors during our breakfast break in order not to soil them with our food. On this protective pad, the world map was shown. While I was now eating my sandwich and drinking my chocolate during the daily breakfast break, I studied the world map every day, and again and again, my view was directed to Canada and Alaska. What a huge country this must be, endless wilderness, eternal ice, bears, and other unknown wild animals in never ending forests.

In winter 1987 /1988 I was once again in that small backyard garage, which also repaired and serviced BMWs. There on a windowsill, next to oily rags and tools, a small flyer of a tour operator was lying, creased and oily. I leafed through it a little and saw a travel offer to Canada / Alaska, by motorcycle. "Edelweiss Bike Travel, the Motorcycle Touring People", never heard of them. With this the decision was made, this is where I'll go. As a young engineer, my only dream was to ride my motorcycle to Canada and Alaska. I didn't have the time or money at that time, but it'll work itself out. There was still time until summer.

I then booked with Rosi Maag, the German branch of Edelweiss in the travel agency Schmalz (that was the name at that time) in Altenkirchen. I brought the money, which had been scraped together with great effort until then, to Altenkirchen personally. In my archive, I found the booking confirmation and the flight tickets. Departure was on 07.08.88 from Frankfurt to Vancouver.  There I picked up the rental bike, very close by, it was 150 km, as a passenger with luggage on the long arm. The handing over was quite unbureaucratic: here are the keys, have fun. So, I found myself on a very used Ténéré, which should carry me now through the wilderness of the north for the next 3 weeks.

We were ten participants from the USA, Switzerland, and Germany, including 2 tour guides. I thought to myself, what are you doing here? Riding straight ahead here for days, through the tundra and forests of this huge country. But after 2-3 days, I realized that I am in the place I used to look at on the map. Endless expanses, millions of lakes, and thousands of rivers. The biggest salmon and the biggest bears.  And only 500.000 people (1988). 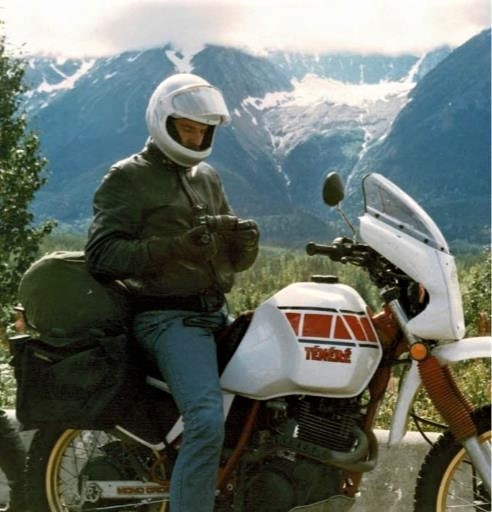 Essentially, the roads went straight ahead. A change of direction was only possible at a junction. Then it went straight ahead again. We often spent the lunch break in a restaurant at the edge of the dusty highway. Behind one of these restaurants a wild, rushing river was raging. On the rocky cliffs, the locals stood with up to 6-meter-long poles at the end of which a metal rake was attached. With great skill, they fished the salmon from the floods, which we received a quarter of an hour later in the form of an XXXL salmon steak. Unbelievable, plus half a liter of ice cubes with Coke. That's how the Canadians are, even at 12 degrees.

Cachier Highway was the first dirt road I rode, with my lips pressed together and my hands cramped around the grips I arrived in a forest clearing in the evening, along with my new riding buddies. Here was our night's lodging. 5 wooden huts, each had a room with 2 beds. Bathroom outside. Fortunately, our tour guides had enough vodka, also for brushing teeth. So, we went through British Columbia, Yukon Territory, through the Rocky Mountains, via Prince George, New Hazelton, Watson Lake, Whitehorse. Mile by mile through the wilderness to Dawson City, the gold mining town on the Klondike River. The traces of the gold diggers from the last 1890s were still clearly visible, we could see what those golden times were like.

Meanwhile, the gold industry here has become a technical industry. On the evening of the rest day spent there, our group was awarded an honorary title. "The Ten of the Top". Because we were the first to do this tour in a group. Cachier Highway was the first dirt road I rode, with my lips pressed together and my hands cramped around the grips I arrived in a forest clearing in the evening, along with my new riding buddies. Here was our night's lodging. 5 wooden huts, each had a room with 2 beds. Bathroom outside. Fortunately, our tour guides had enough vodka, also for brushing teeth.

So, we went through British Columbia, Yukon Territory, through the Rocky Mountains, via Prince George, New Hazelton, Watson Lake, Whitehorse. Mile by mile through the wilderness to Dawson City, the gold mining town on the Klondike River. The traces of the gold diggers from the last 1890s were still clearly visible, we could see what those golden times were like. Meanwhile, the gold industry here has become a technical industry. On the evening of the rest day spent there, our group was awarded an honorary title. "The Ten of the Top". Because we were the first to do this tour in a group. We celebrated this in one of the legendary saloons with gambling den. Out of this cheerful mood the idea was born, in case we'd gamble successfully, we would charter a water plane with the total profit and fly from Anchorage to the glaciers on the summits of Mount McKinley. Later that evening we were successful and happy and our day off in Anchorage was planned.

After the profitable free day in Dawson we were now on the "Top of the World". I always went to my motorcycle about 15 min earlier than my tour friends, because I had problems starting my bike for the last days. I needed my time every morning to get the bike going. At the end of the trip it should turn out that the choke cable had come off, so I had to kick my bike warm every morning, and my thigh width had increased accordingly. 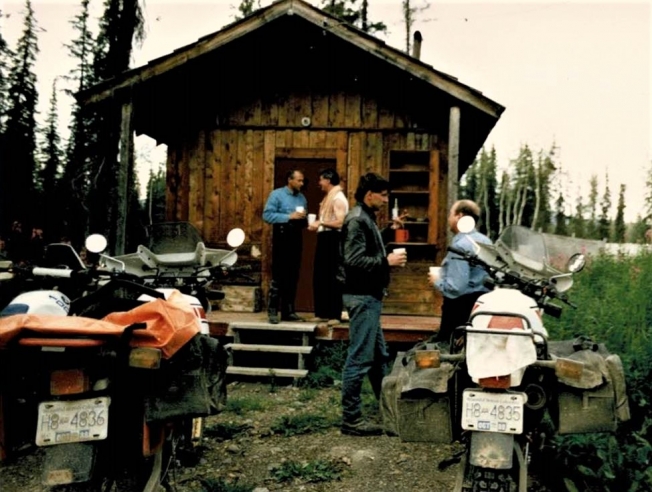 In the permafrost the gigantic earth-moving machines laboriously tried to keep the road passable. Only a few of the monumental trucks tried to get to Alaska via this route. We rode in the man-deep tracks that the earth-moving machines left behind. Also, some campers were there. All around us the endless wilderness spread out. After this tour, we were to have gained extensive off-road experience. After more than 30 years of motorcycle experience, I can say today that you can also master impassable terrain with a BMW K100 RS and a BMW K 100RT. Who would have thought that?

The border crossing to Alaska is called Chicken, five houses, including a border station with a shop where you can buy everything. Behind the counter, there is a double-barreled shotgun because sometimes bears drop by. Of course, the simultaneous fuel stop provides a good opportunity to exchange some important information, such as: does the next gas station have gas, where were the last bears, are the roads passable... etc? Along the big oil pipeline, we went to Anchorage. Gigantic, this building stands on about 30.000 supports above the always frozen ground and is heated. The flow of the oil causes a deafening noise in the endless expanse of this hostile wilderness.

Ketchum Air Service was the name of the "one person" airline. A young bush pilot flew us together with his flight attendant, his son, to the glacial lakes in the arctic wilderness of Mount McKinley. We were accompanied for hours by the shadow of our 10-passenger aircraft which was always below us due to the sun and by a deafening noise due to the comfortable interior made of corrugated metal. The fascinating reflections on the glaciers, lakes, and mountains at 6.000 m altitude was unique. The legendary Edelweiss picnic took place at one of these lakes at 5,000 m above sea level on a small island in the eternal ice.

A fascinating experience was the train transfer from Valdez in a tunnel through the Wrangell Mountains. The motorcycles were lashed down on open flatbed wagons. To prevent them from falling over, we were instructed to remain seated on the bikes. At the tunnel exit, we could see that the never-ending train was powered by a coal engine. The traces of coal soot remained in our eyes, ears, and nose for many days afterwards. Through the Inside Passage, we went to Vancouver Island by boat. Past an unexpected, never-ending, fascinating animal world. Endless flocks of birds, herds of whales and dolphins. Past the calving glaciers and the never-ending fascination of this country.

In Vancouver this journey ended after more than three weeks. Still today, 32 years later, this tour is ever so present before my eyes. I think also because one year after this tour the devastating tanker accident happened in this coastal region. Over many years, a very intensive correspondence and personal friendship has developed with the "Ten of the Top", which at that time was still exchanged worldwide by hand-written correspondence. A friendship with Wolfgang Merten still exists today, which has developed over several decades on many journeys. "The art of motorcycle travel" was the slogan of Edelweiss in the 1980s. This, too, has continued to develop to perfection. Tour operators and tour guides always achieve to mix planning and improvisation up to perfection. I no longer have my world map from my school desk, but a world map hangs on my wall. Canada and Alaska are at eye level. 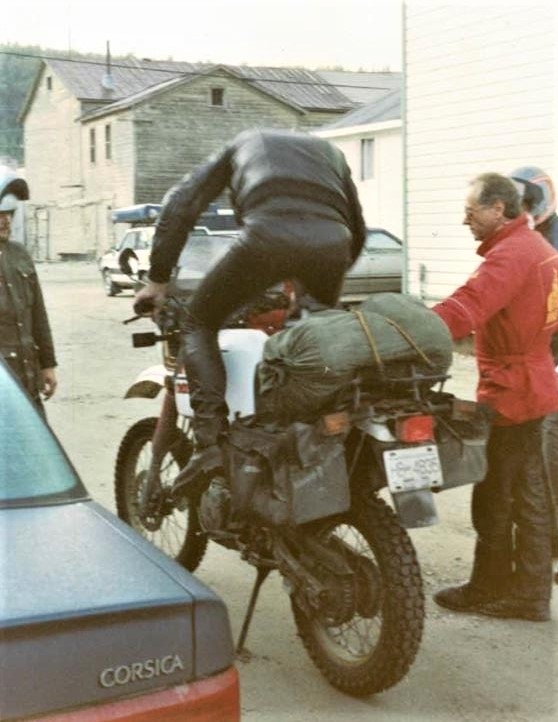 Best book there is!

Teiga Junior
Thursday, December 31, 2020 at 01:47
It is with great honor to be part of this story and Edelweiss's mine. May many more adventures come.
Gratitude my Brothers.
Reply
Facebook Twitter Google+