best book there is, part 9: a wet way out 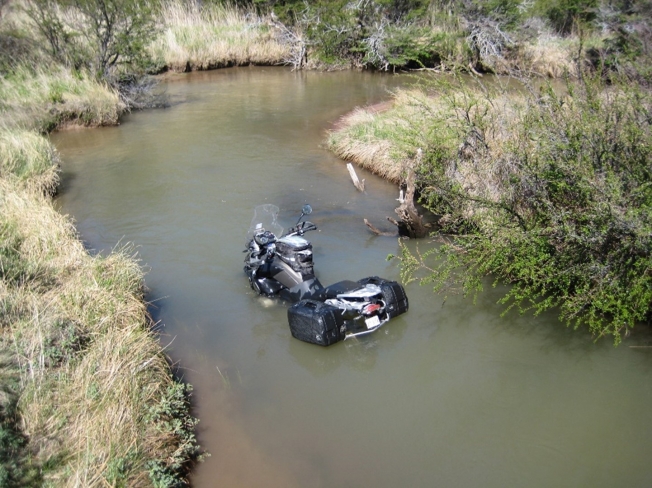 It happened on the Adventure Patagonia Tour 2012, when I rode my 1200 GS through a narrow valley on a gravel road, practically alone in the deserted landscape. There was no other rider in front of me. Only occasionally, wild guanacos, the local relatives of the llamas, stood at the roadside.

Suddenly Richard, a member of our group, appeared before me on a narrow wooden bridge. He gestured wildly with his arms and I understood that I should stop. When I reached the bridge, I saw why: In the middle of the small creek which the bridge crossed his GS was standing (photo)

What had happened? Our group, consisting of 14 participants, our guide Florian and the local mechanic had started in Chile in the morning. The destination of the day's stage was the Estancia La Angostura in Argentina, located in the middle of nowhere. After a short ride, we reached the narrow gravel road leading to the border and the group split up.

Everyone should be able to ride at his own speed. The meeting point was the Chilean side of the border crossing. Florian and the accompanying truck followed at the end.

I was about in the middle of the group when I reached Richard with his damaged bike. To my question about what had happened he answered that he had noticed the bridge too late, it was right behind a sharp bend covered by bushes. He was afraid he would not be able to cross the bridge safely at the speed he was riding and had taken the "emergency exit". Instead of crossing the bridge, he had ridden straight ahead and had come to a halt sitting upright on his bike in the creek. Fortunately, he had not injured himself.

The following rescue operation turned out to be somewhat difficult. It took some time until the part of the group that had ridden behind us reached the bridge. The rest of the group didn't know about the incident and waited at the border. Since help from outside in the almost deserted area, without mobile phone reception, was not to be expected, we were on our own.

Richard and Florian undressed down to their underwear and went into the cold water, pushing the 250 kilo GS to the embankment, from where we pulled it out of the creek with united forces.

Unfortunately, the rescue was not completed with that. Water had penetrated through the exhaust pipe. After our mechanic disassembled it and the water ran off, the machine started again. The risk to ride without an oil change and damaging the engine was too big. We decided to load the GS into the cargo area of the truck. But it had to be cleared out first because there were our luggage and spare parts for the machines. And there was no ramp, so we had to load the BMW by hand.

With a delay of two and a half hours, we finally reached the border and the rest of the group, who had already wondered what had happened.

For Richard, the tour continued on his bike after two days, because only then we reached a place where there was enough oil for a complete change. To me and certainly to all the others involved, this somewhat curious incident on a not exactly uneventful tour through Patagonia is permanently in my memory.

best book there is, part 9: a wet way out

Dan McPherson
Sunday, April 18, 2021 at 21:33
Isabel and I were among those waiting at the border, hoping that nothing too terrible had happened. All is well that ends well, though Richard was none two happy for the next two days riding in the truck! Such a memorable day, and a bbq feast after!
Reply
Facebook Twitter Google+